Libusters
'Cartoon of The Day'
at: news.libusters.com
As rough as it looks there are indeed some times
when the truth needs to be told. 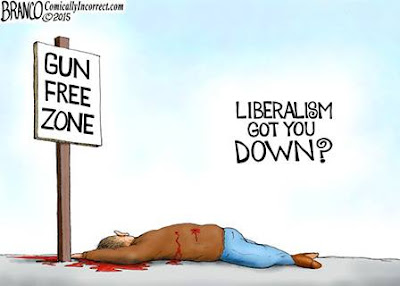 Well, it’s finally here: a piece of gun control legislation that could actually pass. The Fix NICS Act, which seeks to strengthen background checks by penalizing federal agencies that fail to forward criminal records to the FBI to update the National Instant Criminal Background Check system. The horrific shooting in Sutherland Springs, Texas that left over 20 people dead, prompted the legislation. The shooter, Devin Patrick Kelley, was an Air Force veteran, who was court martialed for domestic violence in 2012. He was convicted and sentenced to a year in jail. He was given a “bad conduct” discharge (not the same as dishonorable) in 2014, but his criminal record was never forwarded to the FBI. That’s how he was able to obtain firearms, when he shouldn’t have. If one is convicted of domestic violence, they’re prohibited from purchasing or owning firearms.

There’s bipartisan support for this legislation. It could pass, but Democrats could torpedo it, despite strong support from Sen. Chris Murphy (D-CT), a key gun control advocate. Why? Well, because if this passes, that would be the end of the legislative offensive on gun rights. Oh, and they might want to use this for the 2018 midterms (via WaPo):


Even though one of their own is co-sponsoring the Fix NICS Act, which would punish federal agencies that don't submit criminal records to the national criminal background check system for firearms, Senate Democrats have spent their first few days back in Congress this week dissing the bill.

Email ThisBlogThis!Share to TwitterShare to FacebookShare to Pinterest
Iran expanding proxy wars throughout Middle East after the fall of the Islamic State

Former American diplomat Ryan Crocker warns that Iran is “elevating their proxy wars” in the Middle East with the goal of expanding its influence “in the post-Islamic State Middle East.” Also, Iran’s supreme leader, Ayatollah Khamenei, repeated in a tweet that Israel “won’t be around in 25 years!” The Iranian expansion is worrying. Researchers state […]

Posted by Diane Sori at 9:41 AM No comments:

Email ThisBlogThis!Share to TwitterShare to FacebookShare to Pinterest
RIGHT SIDE PATRIOTS...for those who missed last night's show (or who just want to listen again) where Craig and Diane discussed the two hot-button issues of DACA and guns; another aspect of the Parkland school shooting; and important news of the day...you can listen to it again at your convenience on SoundCloud at: https://soundcloud.com/right-side-patriots-260798913/rsp-arch-3-2-18

No countries will be exempt from the steep steel and aluminum tariffs President Donald Trump announced this week, which have outraged allies and stoked fears of a global trade war, a senior White House official said Friday.

Trump "made clear that this would be an across-the-board tariff with no exclusions," including key allies Canada and Europe, the official told reporters.

However, the White House will consider possible exemptions in "situations" that arise on a case-by-case basis, the official said.

President Trump's announcement Thursday with industry leaders at the White House that he would impose a 25 percent tariff on steel imports and 10 percent on aluminum outraged allies and stoked fears of a global trade war.

Trump tweeted Friday, however, that "trade wars are good, and easy to win" — and Commerce Secretary Wilbur Ross called the tariffs "no big deal," illustrating their "trivial" impact on prices with a can of Campbell's soup.
But other top administration officials —among them National Economic Council Director Gary Cohn, Defense Secretary James Mattis and national security adviser H.R. McMaster — oppose the tariffs and have successfully fended them off for more than a year, according to news reports.

Twitter is indeed a highly toxic environment, with people behaving with breathtaking viciousness, often egged on by their peers. But this is virtually always among leftists, who clearly feel justified in spewing the most vile hatred and working to destroy the lives of those they hate, all because they believe they are more righteous than their targets. And Twitter seldom, if ever, cracks down on those hate-filled leftists. Instead, it constantly targets and deletes the accounts of vocal and outspoken conservatives, or shadowbans them so that only their followers can see what they say. If Jack Dorsey really wants to make Twitter less toxic, he should start enforcing its rules fairly across the board, and stop allowing Twitter to be a fair platform for the left only. But will he do that? Almost certainly not.

“Twitter’s asking for help on how to be less toxic,” by Hayley Tsukayama, Washington Post, March 1, 2018:

Twitter on Thursday announced plans to take a more critical look at its dark side and asked for outside help to develop ways that it can elevate the tone of online conversation.