The albatross is a superstitious relic written about in Samuel Taylor Coleridge's poem “The Rime of the Ancient Mariner.” In that poem the narrator killed the bird and his fellow sailors eventually forced him to carry the burden of his crime by wearing the dead bird around his neck. Ever since, the albatross has become a metaphor for a psychological burden that feels like a curse.

The Democrat party has an albatross, a burden that is a curse from which they have but one means of escape...they must remove said albatross from their ship. And that albatross is Joe Biden. He’s in trouble...deep trouble...and the peril for his party is real if they fail to cast the albatross overboard. The trouble Joe Biden is in is much more than political, it's legal in nature and it's international in scope. The peril for his party is of his party’s own doing as they continue backing Biden out of a combination of desperation, arrogance, and hatred of Biden’s foe in the upcoming election...President Donald J. Trump.

Read entire report and see videos here: https://thepatriotfactor.blogspot.com/2020/05/investigative-report-albatross-that-is.html
Posted by Diane Sori at 8:17 AM No comments:

The reauthorization of the FISA program is in limbo as the White House, House Republicans, Democrats and the Department of Justice continue to have major legislative disagreements with the secret program. The domestic spying authorization technically expired in March, but the Senate passed a 77-day emergency bill to fill the gap.

Today, Friday, May 29th from 7 to 9pm EST, RIGHT SIDE PATRIOTS Craig Andresen and Diane Sori discuss their Special Investigative Report: 'The Albatross That Is Quid Pro Quo;' George Floyd's death and its ramifications; and other important news of the day.


Hope you can tune in to RSP Radio at: https://streamingv2.shoutcast.com/right-side-patriots 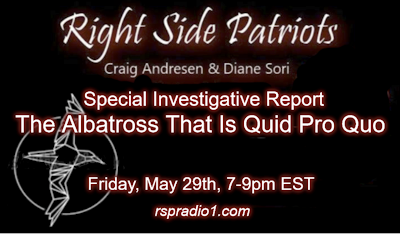