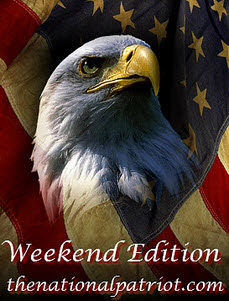 Iraq is all but lost today. The green zone is all but awash in a sea of blood. Baghdad is falling, the people are fleeing…running for their very lives but to where? We don’t know. THEY don’t even know but they know they can’t stay there.

What started as maybe 1500 Sunni insurgents has turned into tens of thousands of them and as they continue to stream into Iraq from the northwest, from Syria, they gain strength, momentum and rage.

Having taken the Iraqi central bank in Mosul, ISIS is now the most well-funded terrorist operation on the planet. They, unlike so many other terrorist hoards, don’t have to rely on third party financial support because, from that bank in Mosul, they plundered more than $425 million dollars and as they extend their terror from one Iraqi city or town to the next, they gain more riches.

Into each town or city they enter, they carry the heads of those they have murdered on their bayonets and on poles. In their wake, they leave the mangled bodies of those they crucify and headless corpses litter the streets behind them.

The purple ink that once was a proud display of having voted has faded from the fingers of the dead though it never faded from their hearts and it is very much on the minds of those who flee.

I am sickened by those who, in their desperation to excuse Obama for this, attempt to blame Bush.

“Bush started an illegal war” they say. No…no he didn’t. Bush had the consent of congress to go to war in Iraq and that included a damn good number of liberals. “Bush LIED” they scream but, no…no he did not as he provided TO congress all intel gathered on Saddam and it wasn’t just our intel either. The world’s intel operations showed Saddam’s Iraq to be in possession of chemical weapons and trying to build nukes.

Then liberals try to claim that Bush falsely blamed Iraq for 9-11 but I have yet to have so much as a single one of them provide me with proof that Bush blamed Iraq for that. They can’t because, he never did and they know it.

Click on link to red full article...
http://www.thenationalpatriot.com/2014/06/15/weekend-edition-hey-obamawhos-your-al-baghdadi-now/
Posted by Diane Sori at 9:53 AM 2 comments: Links to this post

According to the House Ways and Means Committee, the IRS has "lost" two years of emails belonging to former head of tax exempt organizations Lois Lerner. The IRS doesn't have a record of her emails to outside groups or government agencies from January 2009 through April 2011, conveniently encompassing some of the same time when tea party groups were being targeted for extra scrutiny and possible criminal prosecution. The IRS says the loss of emails is due to a "computer crash" and claims emails from or to Lerner from the White House, Democratic members of Congress, the Treasury Department, FEC and Department of Justice cannot be located. They do however have emails belonging to Lerner that she sent to other IRS employees.

“The fact that I am just learning about this, over a year into the investigation, is completely unacceptable and now calls into question the credibility of the IRS’s response to Congressional inquiries. There needs to be an immediate investigation and forensic audit by Department of Justice as well as the Inspector General," Ways and Means Committee Chairman Dave Camp said in a statement. “Just a short time ago, Commissioner Koskinen promised to produce all Lerner documents.

It appears now that was an empty promise. Frankly, these are the critical years of the targeting of conservative groups that could explain who knew what when, and what, if any, coordination there was between agencies. Instead, because of this loss of documents, we are conveniently left to believe that Lois Lerner acted alone. This failure of the IRS requires the White House, which promised to get to the bottom of this, to do an Administration-wide search and production of any emails to or from Lois Lerner. The Administration has repeatedly referred us back to the IRS for production of materials. It is clear that is wholly insufficient when it comes to determining the full scope of the violation of taxpayer rights.”

Emails belonging to Lerner that were not "lost" have shown that she was in contact with Democratic members of Congress and the Department of Justice about prosecuting tea party groups. Just this week, emails surfaced showing Lerner sent confidential tax information belonging to conservative groups to the FBI for investigation just before the 2010 midterm elections.

According to Camp, this is the first time the IRS has disclosed the loss of emails since the investigation into IRS targeting of conservatives started more than a year ago.


“Isn’t it convenient for the Obama Administration that the IRS now says it has suddenly realized it lost Lois Lerner’s emails requested by Congress and promised by Commissioner John Koskinen? Do they really expect the American people to believe that, after having withheld these emails for a year, they're just now realizing the most critical time period is missing? Congressional oversight has revealed that the IRS has –potentially illegally– shared confidential taxpayer information with the FBI and lost crucial email records even as the agency continues to withhold information by not fully complying with the Committee’s subpoena. Left to the IRS’ own preferences, the White House would still be retelling the lie that this was all about mismanagement confined to a local office. The supposed loss of Lerner’s emails further blows a hole in the credibility of claims that the IRS is complying with Congressional requests and their repeated assurances that they’re working to get to the truth. If there wasn't nefarious conduct that went much higher than Lois Lerner in the IRS targeting scandal, why are they playing these games?"

9 Ways Fathers, On This Father’s Day, Can Avoid Raising a Barack Obama

It’s Father’s Day today and I can’t think of a more important job than raising your kids right. Don’t believe me? Well then, I have two words for you: Bowe and Bergdhal.

As much as some stretch-panted lesbian might try to marginalize the role of fathers with their mullet-headed, misguided, misandristic Weltanschauung, the stats clearly state that when pop is in the house, and he properly doles out TLC, the kids come out as a great asset to the planet instead of selfish jackasses.

And that’s what our country needs: parents raising kids who love God and our country and don’t cost our nation one red cent, but rather add tremendous value to this great experiment in self-governance.

Y’know, sometimes I wonder if Obama had been properly fathered then maybe our country wouldn’t be so embarrassed, in debt and internationally laughed at right now.

Therefore, and herewith, are nine ways you, the young dad, can make certain you don’t raise a kid like el presidente.

1. Make sure your children appreciate this nation, its founding docs and its original intent and not some wet dream Bill Ayers and Bernadine Dohrn had back in the late ‘60s when they were high on acid, Che Guevara and Saul Alinsky. Especially be certain that they love our Armed Forces who protect us and not slice and dice their benefits.

2. Make certain your kids know it’s wrong to lie your butt off to people who have given you their trust. For instance, if you tell people "they can keep their health care plan and their doctors, period!” then mean that, dammit.

3. If in the event your offspring does make mistakes and situations get worse under their care, train your child to own their mistakes instead of blaming George W. Bush for their ham-fisted, ill-thought out blunders.

4. Teach your child that glib speeches read from a teleprompter that are laced with platitudes and horse manure do not replace character, honesty and integrity.

5. Lovingly school your young child that when he gets older, writing two books about yourself, or worse yet, having them ghost-written about oneself, is really, really weird and doesn’t make one a great leader but rather a Little Lord Fauntleroy.

6. Take the time also to train your dear child to throw a baseball properly so he doesn’t look … uh … um … effeminate should he ever be called upon to throw out a first pitch during a baseball game.

7. Father, if you have a son, let him know it’s okay for him to drink out of a straw when he’s like … uh … three but not when he’s the leader of the free world. At least not in public; and if he ever does drink from a straw in public tell him to never look someone of the same sex in the eye while doing so. The same goes for eating a banana.

8. In addition, dads, please instruct your spawn not to frickin’ spy on people. Okay? It’s rude and no one likes it and people will think you’re a paranoid control freak.

9. And finally, teach your young whippersnapper if he is a boy to forego marrying a mean woman who’s ashamed of this nation and wants to police what people eat and don’t eat.

Email ThisBlogThis!Share to TwitterShare to FacebookShare to Pinterest
Happy Father's Day to all my blog followers who are Dads...
enjoy this your special day.

Posted by Diane Sori at 12:37 AM No comments: Links to this post