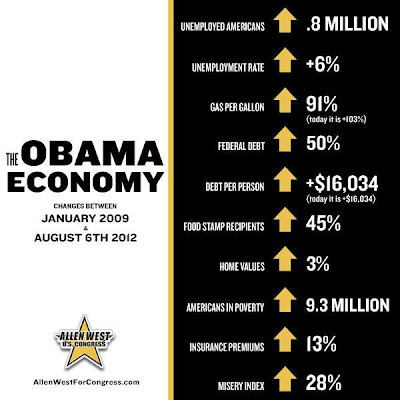 Posted by Diane Sori at 7:54 PM No comments:

Single women I challenge you to READ this

by Bill Spetrino
Fact 1: Since Obama took office in January 2009, an amazing 92 percent of all job losses have been among women.

In the last 26 months, U.S. payrolls have shrunk by 740,000 jobs and of those, 683,000 belonged to women, according to the Bureau of Labor Statistics.  The Dems will try and give 100′s of reasons why this FACT is not relevant.  It doesn’t make the fact any less or more true.  As the economy gets worse younger single women lose their jobs first. That fact has played out the past 4 years and is no campaign rhetoric but reality for over 800,000 women

However Obama has a huge advantage of single women 72-26 percent.  The good news is there are MORE married women than single women.  WE will see what group is MORE motivated to show up.

Fact 3: Romney has NO desire to END planned parenthood as the Obama liars like to parrot.

In fact Ann Romney the private citizen gave to planned parenthood.  Mr. Romney just doesn’t think the taxpayer should fund ABORTIONS and the majority of Americans agree with him.  Private donations should be used to fund it as each person sees fit.

Fact 4: Contraception another weapon of the LEFT costs 9-20 dollars a month.

If you can’t afford to put that towards your budget every month then with all due respect you should not be having sexual intercourse.  Again the majority of Americans don’t want to pay for someone else’s birth control.  I have NO problem helping folks pay for their food and hospitalization for them or their children and have no problem with programs that help you with utilities and section 8.  However I am NOT paying for your birth control I feel that cost should be paid by you.  Not being callous just keeping it real.

Why is this. For the most part its IGNORANCE.  Sorry I bet you weren’t expecting that.  It’s TRUE!

Ignorance is NOT calling someone stupid or dumb.  It is simply telling you that you are obviously unaware of Mr. Romney’s past experiences and what he actually represents.

With a anemic economy which group of people are hurt worst rich white women?  No single minority women have it the hardest because let’s face it most 2 earner families are struggling.  If you are a single minority female your odds of reaching financial independence is substantially lower ,especially in a poor economy.

Of course Oprah Winfrey and many actors and actresses can do fine.

But for you hard working women the best thing that can help you is a great economy which we had from 1995-2007,which coincides with the Republican control of the House and Congress.

The war on poverty has cost American taxpayers over a trillion dollars and has unfortunately not dramatically improved things for many PRESENT single women struggling to make ends meet.

Please share this article with ALL single women especially minorities.  I think that most are hard working well intentioned folks who are politically naive and unable and unwilling to listen to articles like this one.

Did you all know President Obama’s last 2 budgets got ZERO Democratic votes?

Mr Obama was unwilling to work with his OWN party but had plenty of time for golf.

Mr Obama talked about shared sacrifice but his wife took 17 vacations on the taxpayers dime while single minority women continue to struggle to support their families ,many still forced to live with extended family.

President Obama refused to talk to ,let alone help his own flesh and blood in Kenya.

Mr Obama went to Reverend Wrights church and by his own admission played a very small role in it.

He was not actually involved in helping the poor like Mr Romney and gave less than 1% of his income to charity unlike Mr Romney who gave 19% or over 4 million dollars per year.

Please do your research on Mr. Romney it is clear Mr. Obama was unable or unwilling to help you or this anemic economy.  Share this with your friends and co-workers and family and think about GIVING Mitt Romney a chance in November.

Thank you and God Bless.

Email ThisBlogThis!Share to TwitterShare to FacebookShare to Pinterest
Which Party is Extreme on Abortion? They Both Are.

When it comes to abortion, which political party's views are more extreme?

Unless you've spent the past week as a stowaway on NASA's new Mars rover, the approved media answer is obvious: Republicans are the abortion fanatics. Between the furor over Todd Akin's "legitimate rape" gaffe and the GOP platform language calling for a constitutional amendment to undo Roe v. Wade, the Republicans have revealed themselves to be -- so The New York Times editorialized on Wednesday -- "on the most extreme fringes of American opinion."

The platform's silence on any exemptions for rape or incest, which critics swiftly dubbed the "Akin plank," particularly stoked the flames. The GOP, declared Rachel Maddow on MSNBC, believes in "making rape victims bear their rapist's baby." The Boston Globe splashed a six-column headline across the top of Page 1: "GOP plank opposes all abortions." The views held by Republican leaders, Michael Tomaskey wrote at the Daily Beast, "are not anywhere close to being on the normal political scale."

Even some Republicans piled on. The party's former chairman, Michael Steele, told an interviewer that omitting rape and incest exceptions from an abortion ban would be "way outside [the] mainstream of American thought."

Which is true. Pollsters have been asking Americans for decades whether and under what circumstances they think abortion should be restricted. Only about 1 in 5 respondents ever say that abortion should always be illegal. When asked directly whether abortion should be permitted if a pregnancy results from rape or incest, huge majorities – usually around 75 percent – say yes.

Moreover, only a minority of Americans favors amending the Constitution to end legalized abortion or overturn Roe v. Wade. In poll after poll, about 6 in 10 Americans express support for Roe. A GOP platform that endorses a human life amendment conferring on the unborn "a fundamental individual right to life which cannot be infringed" – essentially a call to ban abortion, period – thus embraces a position that significant majorities of the public do indeed reject.

So Republicans are the extremists on abortion? Not so fast.

If you're like most Americans, you believe that abortion is morally wrong. You oppose abortion on demand. You think abortion should be legal only in certain circumstances. Even then you favor restrictions on its use, including 24-hour waiting periods, parental consent in the case of a minor, and requiring a married woman to notify her husband before she gets an abortion. You want late-term abortions to be prohibited, and you reject using public funds to pay for any abortions. (These are all majority opinions, reflected in numerous polls. A broad compilation of decades of polling data, "Attitudes About Abortion," is updated regularly by Karlyn Bowman of the American Enterprise Institute.)

Does the Democratic Party uphold these mainstream positions? On the contrary: It rejects every one of them.

Though one-third of Democrats identify themselves as pro-life, the Democratic Party platform is strident in its defense of abortion on demand. The party "strongly and unequivocally supports Roe v. Wade," the platform avows, and abortion must be made available "regardless of ability to pay" -- that is, at public expense. The 2012 platform, in language recycled from 2008, vows to "oppose any and all efforts to weaken or undermine" the availability of abortion. While solid majorities of Democrats back some limitations on abortion -- 59 percent would ban partial-birth abortions, for example, and 60 percent endorse a mandatory waiting period -- the official position of their party is that even common-sense restrictions are unthinkable.

In 2000, the Democratic platform said the party's goal was "to make abortion less necessary and more rare."

The 2004 platform declared, "Abortion should be safe, legal, and rare." But even calling for abortion to be "rare" is now too much for the Democrats' platform committee, which deleted the word in 2008. Perhaps it's no coincidence that Nancy Keenan, the president of NARAL Pro-Choice America, is a committee member.

Or that the president of Planned Parenthood, the nation's leading abortion provider, will address the Democratic convention in North Carolina next week. That convention will renominate President Obama, who is so hardline in defense of "choice" that he even opposed a ban on sex-selection abortions.

You'd never know it from the media's coverage, but when it comes to abortion there are two political parties with out-of -the-mainstream views. Most Americans are ambivalent on the subject, both pro-life and pro-choice, against most abortions but against undoing Roe. Neither the Republican nor the Democratic platform reflects the average American's opinion in the abortion debate. Neither did the headlines and heavy breathing last week.