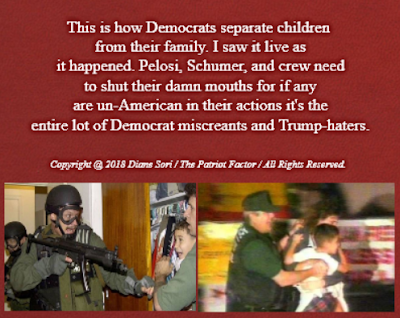 Homeland Security Secretary Kirstjen Nielsen defended the department’s immigration enforcement practices Sunday, tweeting, “We do not have a policy of separating families at the border. Period.”

“This misreporting by Members, press & advocacy groups must stop. It is irresponsible and unproductive. As I have said many times before, if you are seeking asylum for your family, there is no reason to break the law and illegally cross between ports of entry,” she added.

Nielsen reiterated that it is not illegal to seek asylum at a port of entry and made clear the conditions under which children would be separated.

“For those seeking asylum at ports of entry, we have continued the policy from previous Administrations and will only separate if the child is in danger, there is no custodial relationship between 'family' members, or if the adult has broken a law,” she said. “DHS takes very seriously its duty to protect minors in our temporary custody from gangs, traffickers, criminals and abuse.”

Everyone knows these defenses are meant to safeguard the Eiffel Tower against Islamic jihadis, but of course no one would dare say such a thing. That would be “Islamophobic.” And so France is a country under siege, a country at war, against an enemy it dares not identify, while regularly importing massive numbers of people […]
Read in browser »

German MP predicts Merkel could be OUSTED end of NEXT WEEK

If Merkel is indeed ousted, Germany might have a chance to survive as a free nation. If she isn’t ousted, that survival will be very much more in doubt. The poison fruit of Merkel’s suicidal immigration policies are now obvious to everyone (except the most hardcore leftist ideologues), and she will go down in history as the worst German Chancellor since Adolf Hitler. More jihad terror attacks are coming in Germany, thanks to Merkel’s reckless, feckless, and suicidal policies regarding mass Muslim migration. If they don’t oust her, it will be all over for them sooner than anyone thinks, as their country is engulfed in chaos thanks to the Muslim migrants she welcomed in.

“‘We might have a new situation’ German MP predicts Merkel could be OUSTED end of NEXT WEEK,” by Alessandra Scotto di Santolo, Express, June 17, 2018:

GERMAN Chancellor Angela Merkel could lose her powerful seat in the heart of Europe as soon as next week amid clashes within her coalition Government over EU migration policies, claimed German MP Kai Whittaker.