Sometimes a cartoon does say it all. 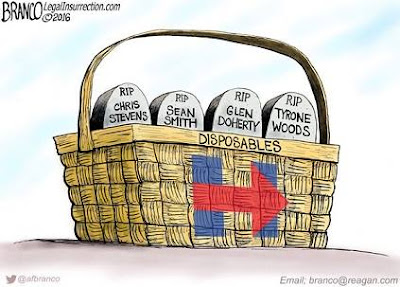 Posted by Diane Sori at 4:00 PM No comments:

Between 1974 and 1983 the FALN claimed a decade long terror war against the US for Puerto Rican “independence” but planned to transform Puerto Rico into a Cuban bases Marxist state. Nine people were seriously injured in 28 Chicago area bombings.  Six were murdered in NY, including four (60 injured) in the horrific January 24, 1975 lunchtime bombing of historic Fraunces Tavern in lower Manhattan.

My father, Frank Connor, only 33, was murdered at Fraunces.  Our family planned to celebrate my recent 9th and brother’s 11th birthdays the night of our father’s murder.

By 1981, eleven of the FALN terrorists were arrested, tried, convicted and sentenced at a Federal trial in Chicago. Sentences ranged from 50 to 70 years for bomb making, conspiracy to commit armed robbery, seditious conspiracy, and illegal possession of weapons including C4 plastic explosives and huge caches of ammunition and dynamite.

Donald Trump championed the police technique of “stop and frisk” on Wednesday in an interview with Sean Hannity that’s scheduled to air on Thursday night. While it’s not clear whether Trump meant Chicago alone or law enforcement agencies around the country, his comments raised the ire of liberals who used it as another excuse to accuse Trump of bigotry.

Asked what he would do about violence in the black community, Trump said:

“I would do stop-and-frisk. I think you have to. We did it in New York, it worked incredibly well and you have to be proactive and, you know, you really help people sort of change their mind automatically.

Posted by Diane Sori at 1:36 PM No comments:

The Muslim targeted women -uncovered women — in Macy*s, in the cosmetic department and he was shouting.

They don’t tell us what he was shouting but we already know, don’t we? He killed four women and one man. Take bets the enemedia blames:


The Muslim was found and taken into custody Saturday night at about 6:30 p.m. after a deadly shooting in a Washington state mall. Authorities say “the motive for the slaying is unknown.” Unknown to the blind, deaf and dumb.

Just as the NYC/NJ bomber was identified as ‘Hispanic’ before his identity was known, the Cascade jihad gunman was also...