TISSUE ALERT: What an 8-year-old kid whose soldier father was killed in Iraq did with a $20 bill he found

Eight-year-old Myles Eckert, going to lunch with his family at an Ohio Cracker Barrel, was thrilled to find a $20 bill in the parking lot. But when he spotted Army Lt. Colonel Frank Dailey in the restaurant, he decided to give him the money with a handwritten note thanking him for his service, and telling him, in part, ‘My dad was a soldier. He’s in heaven now.’

NY Daily News  It is the kind of thing every eight-year-old dreams about. But when Myles Eckert found $20 in a Ohio Cracker Barrel parking lot, he didn’t keep the money for himself, or spend it on a video game. Instead, he gave the money to a soldier dining at the restaurant to thank him for his service to the country. 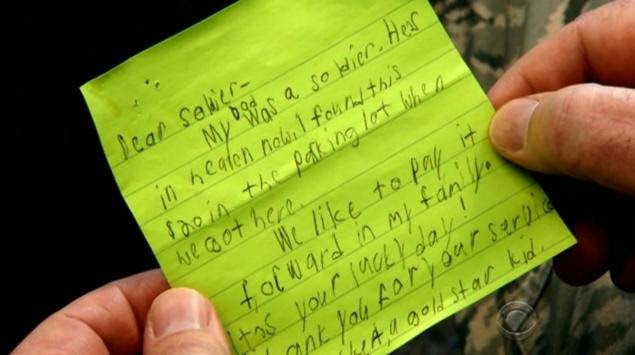 The note, written on a green Post-It, read: ” Dear soldier — my dad was a soldier. He’s in heaven now. I found this 20 dollars in the parking lot when we got here. We like to pay it forward in my family. It’s your lucky day! Thank you for your service. Myles Eckert, a gold star kid.”

Myles was just five-weeks-old when his father Army Sgt. Andy Eckert was killed in Iraq. Though too young to remember his father, Myles says he imagines “him as a really nice person and somebody that would be really fun.”

After handing the money and the note over, Myles asked to visit his father’s grave. Mom Tiffany Eckeet said: “He wanted to go see his dad, and he wanted to go by himself that day.” She pictured the moment he hugged his dad’s gravestone.

Dailey, who is stationed at the Ohio Air National Guard base near Toledo, said he was overwhelmed by the gesture.

Click on the link t see the video...
http://www.barenakedislam.com/2014/03/04/tissue-alert-what-an-8-year-old-kid-whose-soldier-father-was-killed-in-iraq-did-with-a-20-bill-he-found/

(Sorry about the commercial you’ll have to sit through in the beginning of this video, but it’s worth it. It takes a few seconds to get going)