Biden pick for ATF opposed by 20 Republican AGs over his views on weapons, ties to gun control groups
By Brie Stimson | Fox News

Attorneys general from 20 states sent a letter to the Senate on Tuesday, calling on lawmakers to reject David Chipman, President Biden’s nominee for the Bureau of Alcohol, Tobacco, Firearms and Explosives (ATF), over his affiliations with gun control organizations.

"The Second Amendment is the cornerstone of the Bill of Rights," the letter, sent to Senate Majority Leader Chuck Schumer, Minority Leader Mitch McConnell, Sen. Chuck Grassley and Sen. Dick Durbin, opened. "It guarantees our natural God-given right to defend our lives, our families, our property, and our freedom. The confirmation of David Chipman to head the Department of Justice’s Bureau of Alcohol, Tobacco, Firearms and Explosives ("ATF") is an attack on that right and on the millions of law-abiding gun owners across the country."

The GOP attorneys general, led by Montana’s Austin Knudsen, claimed Chipman was "unfit" to lead the agency because of his "extreme positions on commonly owned firearms" and involvement with "anti-gun organizations." Read more and see video here.

Email ThisBlogThis!Share to TwitterShare to FacebookShare to Pinterest
Why the Biden Administration Reportedly Shut Down a Probe Into Coronavirus Lab Leak Theory
Leah Barkoukis / Townhall Tipsheet 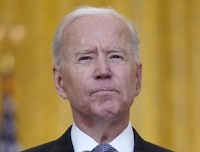 The Biden administration shut down a State Department probe into the origins of the COVID-19 pandemic, looking specifically at whether the novel coronavirus came from a Chinese lab, according to CNN.

The inquiry, which was launched by “allies of then-Secretary of State Mike Pompeo,” began last fall, but was ended in the spring after draft findings were presented to Biden officials.

Questions were raised about the legitimacy of the findings and the project was deemed to be an ineffective use of resources, explained a source familiar with the decision.

Sources involved in the Trump-era inquiry rejected criticisms over the quality of their work and told CNN their objective had been to examine scientific research and information from the US intelligence community which backed the lab leak theory and shone more light on how it could have emerged in the lab.

Email ThisBlogThis!Share to TwitterShare to FacebookShare to Pinterest
RIGHT SIDE PATRIOTS...PODCAST
For those who missed last night's show where RIGHT SIDE PATRIOTS Craig Andresen and Diane Sori discussed 'Being Critical of Critical Race Theory'; 'Let the Lion of Israel Roar'; Dr. Fauci's Covid Flip-Flops; and other important news of the day...you can listen to it (and previous shows) at your convenience at: https://www.rspradio1.com to go directly to our podcasts and hope you become 'followers' of RIGHT SIDE PATRIOTS.