Just a Thought...
They Have No Business Walking the Earth with Civilized Men
By: Diane Sori / The Patriot Factor

Below is a photo of a cowardly muslim migrant almost kicking to death Hendrik Keuleers, an 87-year old Belgium man from the city of Ghant, solely for his criticizing islam and the sharia. And to add insult to injury, Mr. Keuleer, the victim, was charged with inciting violence but thankfully the case was dropped. And the attacker...NOT a damn thing happened to him. So sad that Europe is lost to invaders that have NO business walking the earth with civilized men. 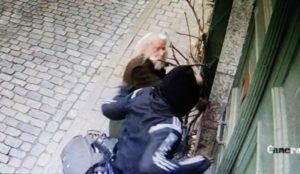 It's often said by politicians in both parties that small businesses are the heart of the US economy -- so it's no minor side note that optimism among the owners of said businesses has shot up dramatically during the Trump presidency.  Setting aside the recent gyrations of the stock market, the fundamentals of America's economy are looking robust amid a climate of determined deregulation and tax relief.  This data point, via Bloomberg, is significant because the historically positive outlook it measures translates into expanded operations, more jobs, and more pay:


Optimism among small companies in the U.S. rose more than forecast in January, fueled by a record number of owners who said now was a good time to expand, according to a National Federation of Independent Business survey released Tuesday. Six of the 10 components that make up the small-business optimism index increased in January, producing one of the strongest readings in the 45-year history of the survey. The figures show sustained, sturdy business sentiment since the November 2016 election.

A measure of plans to boost capital spending in coming months increased by 2 points to 29 percent, consistent with other data indicating robust outlays for equipment. One in five small companies said they plan to boost hiring...The new tax law “produced the most recent boost to small-business optimism,” NFIB’s William Dunkelberg and Holly Wade said in a report. “And federal government-related cost pressures continue to abate, offering a more supportive business climate for small firms...

This chart tells the story:

Read entire story and see video here: https://townhall.com/tipsheet/guybenson/2018/02/13/small-business-optimism-n2448525?utm_source=thdaily&utm_medium=email&utm_campaign=nl&newsletterad=
Posted by Diane Sori at 8:43 AM No comments:

Most Americans today get their news through Facebook, and so the Leftist authoritarian Mark Zuckerberg’s words here are ominous: “For example, take the Wall Street Journal or New York Times. Even if you don’t read them or don’t agree with everything they write, most people have confidence that they’re high quality journalism. On the flip […]
Read in browser »
Posted by Diane Sori at 8:20 AM No comments:

By G-d, we dodged a bullet with these bloody criminals in 2016. President Trump must appoint a special prosecutor.

The corrupt and criminal Democrats never thought they’d lose the election, not for one second, hence the reckless, feckless criminality. Hillary would never have prosecuted these crimes designed to put her in power. On the contrary, she would have rewarded them. Rice’s memo on the eve of President Trump’s inauguration was a last, desperate attempt to cover-up the massive corruption and illegal activities.