Op-ed:
WTF...our election votes to be counted and tallied in Spain!
By: Diane Sori
As we get nearer to Election Day more and more funny business will start popping up.  Some we know about and we expect, like how the dead and illegals will be registering and voting in droves. Some we can’t foresee but the warning signs are everywhere that it will happen, especially since we currently live in Obamaland.  As Joseph Stalin once said, “I consider it completely unimportant who in the party will vote or how; but what is extraordinarily important is this...who will count the votes and how.”
And this is where Obama and his cronies come into play...who will count the votes and how.
Recently, SCYTL, a company based and operated out of Spain bought American owned company SOE, the company that used to count, record, and report our votes in 26 states, as well as count, record, and report the votes of our military members overseas.  Now, instead of an American company counting our American votes, our votes will be counted by a company in a country notorious for voter fraud and count inaccuracies.
Gee, I wonder what deal Obama made with them or what he promised them in order to get them to buy the company and to get SOE to sell to them.  And we know a deal had to be made since the head of the company, Pere Valles, donated a large amount of money to Obama’s 2008 campaign, and since Obama knows this election is not in the bag as the last election was. That alone should send up major red flags everywhere but it seems no one is seeing those flags.
What makes this even more appalling is that along with the purchase of the company itself, SCYTL also acquired the election software that actually records and counts what SOE used to record and count.  Do you understand what this means...a foreign company in a foreign nation whose head has ties to Obama will now have OUR election software, which could enable this foreign company to basically ‘fix’ the election for Obama!
And our military, who could very well determine this election if this election is done the right way, will again have to vote via the internet like they did last time, with no ballots, no paper trail, no nothing to verify who actually cast the votes, how many votes were really cast, and for whom those votes were cast.
Is this convenient for Obama or what!
Am I the only one who has a major problem with this?  Doesn’t anyone else believe that American votes cast here in America and on American military bases should only be counted, tallied, and recorded by American companies on American soil, with American workers handling the entire process?
Am I the only one who is trying to get the word out about this?  Am I the only one who will raise holy hell about this and demand answers?  Am I the only one who will demand that this company NOT be able to touch our votes...I sure hope not.  If this isn’t a rallying cry for us Republicans and conservative leaning Independents to band united together and stand behind, support and work to get the Republican nominee elected than I sure don’t know what is.
Posted by Diane Sori at 11:46 AM 3 comments:

Where is the outrage!
Adapted by: Diane Sori

If you think what happened to Trayvon Martin in Florida was bad...read on!

This post is disturbing to say the least.
The text description is very horrific !!!!

As horrific as this is, it needs to circulate!!!

The bastards car-jacked, then raped Christopher Newsom, cut off his penis, set him on fire and fatally shot him several times while they forced his girlfriend, Channon Christian, to watch.

An even more cruel fate awaited her!

Channon Christian was beaten and gang-raped in many ways for four days by ALL of them, while they took turns urinating on her. They cut off her breasts and put chemicals in her mouth ... and then murdered her.

Knoxville (WVLT) - The District Attorney General of Knox County announced the list of charges now facing the five suspects in the double murder of Channon Christian and Christopher Newsom.

The District Attorney General Randy Nichols did not saying whether or not he will seek the death penalty, but he does say the State will seek conviction for all charges filed in a 24-page indictment from the Knox County Grand Jury.

Odd...NO hate crime charges were filed against them.  It was a hate crime when Zimmerman killed Martin (supposedly in self-defense) but NOT here for cold-blooded, calculated MURDER!!!

SO...Where's Al Sharpton, where's Obama, where's Jesse Jackson, where's The New Black Panthers?
Are they providing counsel and help to the families of the victims?

Of course NOT...the victims were white so to them that makes it OK!

Why hasn't this received national coverage by the news media like the Trayvon Martin case in Florida has...Oh, that's right...the victims were white!

Why hasn't the NAACP, ACLU, New York Times etc., called for an investigation?
Must be because the victims were white!

Why hasn't the FBI been called in to investigate this as a hate crime?
Oh, that's right...the victims were white!

So, if a white radio shock jock uses the phrase 'Nappy headed' Ho,' that gets 2 weeks of constant news coverage.  (BTW, I personally do NOT condone using racial slurs of any kind towards anybody.)

If two white people are tortured, raped, and murdered by a group of black people, it barely gets a mention in the news. 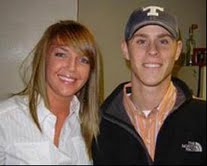 If this gets passed along just maybe, it will end up in the hands of someone in the media or politics who has a conscience, someone who has the guts to stand up for white people, FOR ALL PEOPLE, and say POLITICAL CORRECTNESS be damned, after all 12.6% of the population is now dictating to the majority and that is just WRONG on ALL accounts!!

Or don't pass this along because you don't have the guts either!!!