“We are urging broadcasters to avoid using the familiar B-roll that we’ve all seen before, file footage of ISIL convoys operating in broad daylight, moving in large formations with guns out, looking to wreak havoc. It’s inaccurate — that’s no longer how ISIL moves…” “A more accurate image, said Col. Steven Warren, a Pentagon spokesman, […]

Pentagon: No major review underway on strategy to defeat ISIS

Why would they? According to the Obama administration, their ISIS “strategy” has been a resounding success — true if you are siding with the jihadists.

In Orwellian lingo, Obama’s Central Command spokesman Col. Patrick Ryder said, “We are confident that we have the right strategy. Momentum will continue to be on our side.” 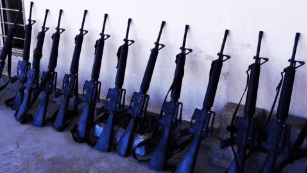 In addition to Ramadi,


The Islamic State (ISIS/ISIL) seized nearly “one-third” of the ancient city Palmyra in Syria after heavy clashes with Bashar al-Assad regime forces and their allies, reported a U.K.-based monitor group.

Palmyra, known as Tadmor in Arabic, is home to a UNESCO World Heritage...

Update: Townhall is giving away free copies of "American Sniper" on DVD. Enter the contest here for your chance to win!

'American Sniper' Chris Kyle is a hero to most Americans for protecting his comrades and taking out terrorists during the Iraq War. The deadliest sniper in US history wrote a bestselling book about his service as a Navy SEAL and it was soon turned into an Oscar-winning film, just released on DVD Tuesday. Kyle’s story turned tragic, however, when he survived four tours in Iraq only to return home and be murdered by a vet he was trying to help.

There was a reason I said 'most' Americans admire Kyle. A select few in the media have suggested the sniper was a racist and, instead of protecting our country, was simply going on 'killing sprees.' As for liberal universities, they have tried to prevent screenings of the film on their campuses because it would be 'unsafe' for students.

Taya Kyle, Chris's poised widow, spoke about this controversy, her lasting love for her husband, her new book ‘American Wife,’ and much more with Townhall.

One of the first things Taya noticed about Chris when they met, was his humility and love for his country.

“He did have such an appreciation for this country and a patriotism that ran more deeply than I had seen before and just that he was willing to die for his country,” she said. “Without sounding cliché and without being flippant, he really felt it would be an honor to do that for this country. He recognized what freedom we have here. He was a cowboy, he was a college student. He had great opportunity and the rest of us did too. I think he had an appreciation for all of it – the land, the history, the people who fought for it for him – all of it.”

Her fondness for him doesn’t end there. She explained what other qualities made Chris a man.

We Made the Right Decision to Invade Iraq

The U.S. was absolutely right to invade and conquer Iraq in 2003. It suddenly has become a stock question to ask candidates for the Republican Presidential nomination a seemingly simple question: would you have invaded Iraq in 2003, knowing then what we know now? And most of them have fumbled badly. And the usual liberal suspects are jabbering away about how the war was based on a bunch of lies and utterly unjustified. Let me explain the proper and most sensible answer to this question.

I have always been surprised that nobody seems to see the crucial importance of one essential fact.

The price of oil for the last decade has averaged around $100 a barrel. In the decade or so prior to 2003, it was well under $20. In 2003, Saddam’s Iraq was, absent WMD, merely a potential threat to the security interests of the U.S. and our allies in the Middle East. (And. yes, the United States of America has serious and legitimate security interests which we would be foolhardy to deny.) Boxed in by sanctions and no-fly zones, and with oil at low prices, Saddam was financially broke and militarily broken.

But fast forward five or ten years. If we had not overthrown his regime, sooner or later Saddam would have wiggled out from under the sanctions regime. And with his coffers flush with record high oil revenues, does anyone doubt that the French and the Russians would have been more than eager to sell Saddam every kind of military hardware his heart desired? We would have been facing not a pathetically weak tin-horn dictator, but a well-armed menace to the security of the Gulf, but by extension to our security. I believe that if you face a nasty and vicious adversary who can someday potentially harm you, better to stomp him into the ground when he’s weak and helpless, rather than being nice and giving him a chance to arm himself.

AFDI Rolls Out New Free Speech Ad Campaign Featuring Muhammad Cartoon
NEW YORK, May 20, 2015: Because freedom of speech is under violent assault, the human rights advocacy group the American Freedom Defense Initiative (AFDI) has announced a new ad campaign to defend the freedom of speech and stand up to violent intimidation kicking off in the nation's capital.
AFDI President Pamela Geller said in a statement: “Because the media and the cultural and political elites continue to self-enforce the Sharia without the consent of the American people by refusing to show any depictions of Muhammad or showing what it was in Texas that had jihadists opening fire, we are running an ad featuring the winning cartoon by former Muslim Bosch Fawstin from our Muhammad Art Exhibit and Cartoon Contest in Garland, Texas.”
Let the American people see what the cowardly press is censoring in accordance with the blasphemy laws under the sharia (Islamic law).
The ad campaign has been submitted to the Washington DC MTA to run on buses and train dioramas in the Foggy Bottom, Capitol South, Bethesda, L'Enfant Plaza, Shady Grove stations. 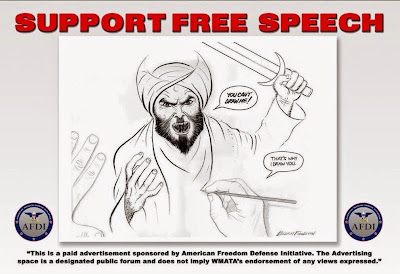 “Drawing Muhammad is not illegal under American law, but only under Islamic law. Violence that arises over the cartoons is solely the responsibility of the Islamic jihadists who perpetrate it. Either America will stand now against attempts to suppress the freedom of speech by violence, or will submit and give the violent the signal that we can be silenced by threats and murder.”
"We cannot submit to the assassin's veto."
Read more »
Posted by Diane Sori at 12:27 AM 1 comment: