Earlier today, the president's entourage drove right past the VA medical center in Phoenix that found itself at the center of last year's firestorm over falsified wait lists and substandard care, a scandal that stirred outrage and rocked the federal veterans' healthcare system.  Obama was in town to deliver a rah-rah speech about the improving US economy, for which he's scrambling to take credit.  He's in the process of attending a string of similar rallies across the country in advance of his State of the Union Address later this month.
The tour's themes are by now quite familiar.  In short, my policies have been successful, and now is the time for additional "investments" and government interventions.  Curiously, the president couldn't be bothered to stop by the Phoenix VA, a towering monument to big government corruption and incompetence.  His priority instead was to lecture a partisan, cheering crowd about the urgent need for more big government programs.  Some veterans were none too pleased by the snub:


President Barack Obama angered veterans by not visiting the troubled Phoenix Veterans Affairs hospital at the center of a nationwide wait time scandal while in town for a speech. Obama's motorcade drove right past the facility on the way to the high school where he delivered his speech on the housing recovery Thursday morning. A small group of veterans were among an eclectic collection of Obama protesters and supporters across from Central High School. Vietnam-era veteran Jesus Miramon was wearing his old U.S. Army dress uniform and holding a sign saying "do not hate vets today." Miramon says the president missed a chance to show veterans he cares by stopping at the VA hospital. White House spokesman Josh Earnest says Obama is committed to fulfilling the nation's promises to veterans.

Oh yes, Obama is passionately committed to fulfilling all those promises to veterans, as evidenced by his attentive leadership on the matter throughout his presidency. He says one thing on the campaign trail, he does another.  In the meantime, his administration and the bureaucracy applied pressure on the VA's Inspector General to water down his findings on the impact of delayed care.  The IG complied, then backtracked amid furious criticism.  In spite of sunlight finally exposing its insidious dysfunction, the system is still broken, and will be very difficult -- if not impossible -- to fix.  By the way, Obama did have time to make an unannounced stop in Phoenix.  He swung by a housing development for a photo-op and a few remarks.  That detour, unlike the VA facility, allowed him to stay on message.  Gotta keep that dubious public opinion "comeback," or whatever, on track.  I recognize that presidents can't be all things to all people, and that schedule constraints are real.  This president seems to have a special talent for uniquely galling optics as it pertains to "no" RSVP's.  His indefensible Ft. Hood agenda springs to mind, of course...and he literally drove right past this place in Arizona, with some diabled vets waiting outside:

For an optics-obsessed presidency, Obama's lapses on that front are at times truly astounding.
Posted by Diane Sori at 1:42 PM 1 comment:

Media Cowards and the Cartoon Jihad

I have never laughed so bitterly as I did while reading Thursday's lead editorial by the great pretender-defenders of free speech at The New York Times.

Paying obligatory lip service to the 10 cartoonists and staffers of the Paris satirical weekly Charlie Hebdo who were slaughtered for offending Islam, the Times intoned: "It is absurd to suggest that the way to avoid terrorist attacks is to let the terrorists dictate standards in a democracy."

My GPS tracker of journalistic hypocrisy immediately identified the Times editorial board's high-altitude location -- ensconced atop their own Mt. Everest of absurdity and self-unawareness.

The Fishwrap of Record priggishly refuses to print any of the Islam-provoking art that cost the brave French journalists their lives. In case you forgot (as its own editorialists have), the Times cowered in 2005-2006 when the Mohammed Cartoons conflagration first ignited. And the publication is capitulating again.

"Under Times standards," a newspaper spokesman said in a statement this week, "we do not normally publish images or other material deliberately intended to offend religious sensibilities. After careful consideration, Times editors decided that describing the cartoons in question would give readers sufficient information to understand today's story."

So says the paper that blithely published a Catholic-bashing photo of the Virgin Mary covered in elephant dung and defended the taxpayer-funded "Piss Christ" exhibit thusly: "A museum is obliged to challenge the public as well as to placate it, or else the museum becomes a chamber of attractive ghosts, an institution completely disconnected from art in our time."

While they feign free-speech fortitude, what Times editorialists really don't want to see is their heads completely disconnected from their necks. Neither do editors at The Boston Globe, ABC News, NBC News, MSNBC and CNBC, who won't publish any possibly, remotely upsetting images of Mohammed, either.

But these quivering double-talkers aren't even the most laughable of Cartoon Jihad cowards.

The Associated Press wins the pusillanimity prize after invoking the sensitivity card to explain why it refrained from publishing "deliberately provocative" Mo toons -- even though the media conglomerate had been selling deliberately provocative "Piss Christ" photos on its website. After the Washington Examiner's Tim Carney pointed out the double standards, AP tried to cover its tracks by yanking the pic.

More absurdity? The New York Daily News pixelated a Mo toon carried by Charlie Hebdo as if it were pornography. CNN did the same in 2006, when it explained it was censoring the offending images "in respect for Islam" and "because the network believes its role is to cover the events surrounding the publication of the cartoons while not unnecessarily adding fuel to the controversy itself."

And therein lies the cartoon capitulationists' grand self-delusion. This isn't about cartoons.

Here it is, the solution to stop jihad, sharia and islamization NOW

I guess this question all this time, “What can we do?” “How can the jihad be stopped?”

I thought it was time I re-ran the AFDI 18 point platform in defense of freedom (first published on Reuters here). We developed in post strategy sessions after our Freedom Congress at the UN on September 11, 2012 (as devout Muslims were attacking our embassies in Libya and Egypt).

Here is the plan to saving America …. and the West. Join us.

This comment came in on this Jihad Watch thread not long ago:

January 8, 2015 at 10:41 am
im very happy by the death of those who mock our prophet, and You jihadwatch should wait and see what will happen to you soon for republishing that image. JUST WAIT AND SEE!!! Hahaha

Thanks for the info, Yusuf. Here is the image again, in case anyone missed it the first time.

Some threatening posts from an Arabic forum translated into English

Not exactly sure where the below comments came from other than they are from this website: 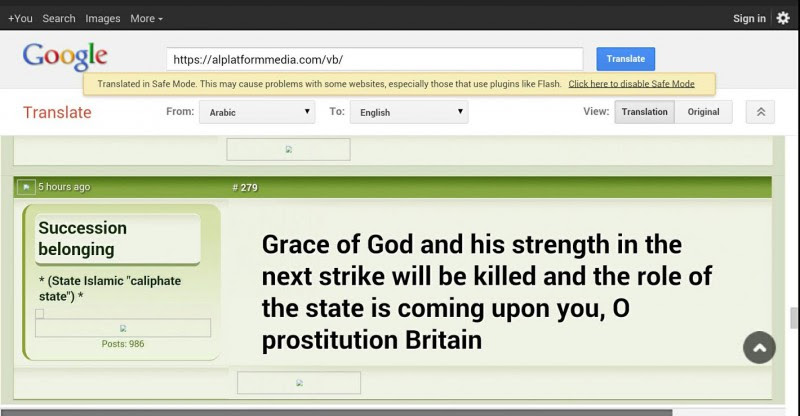 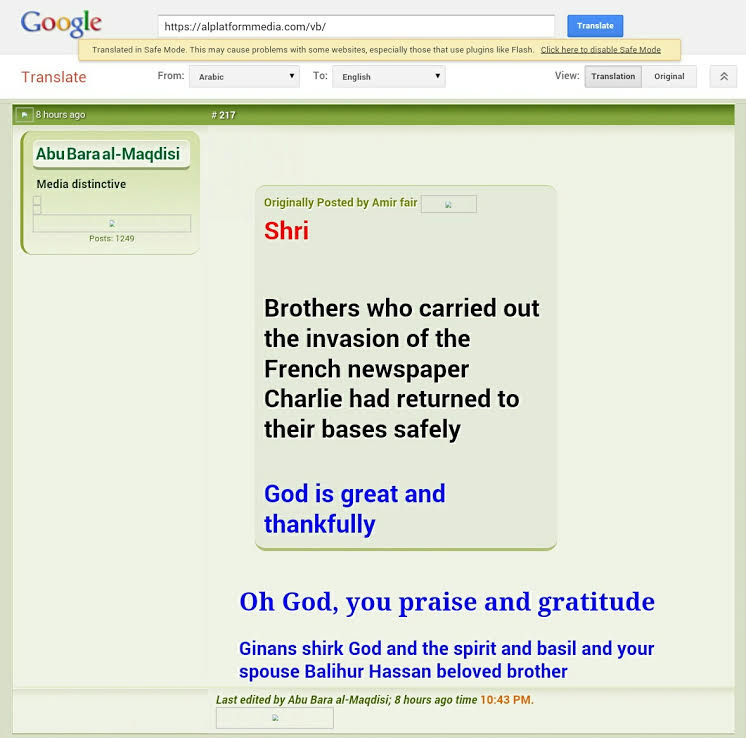 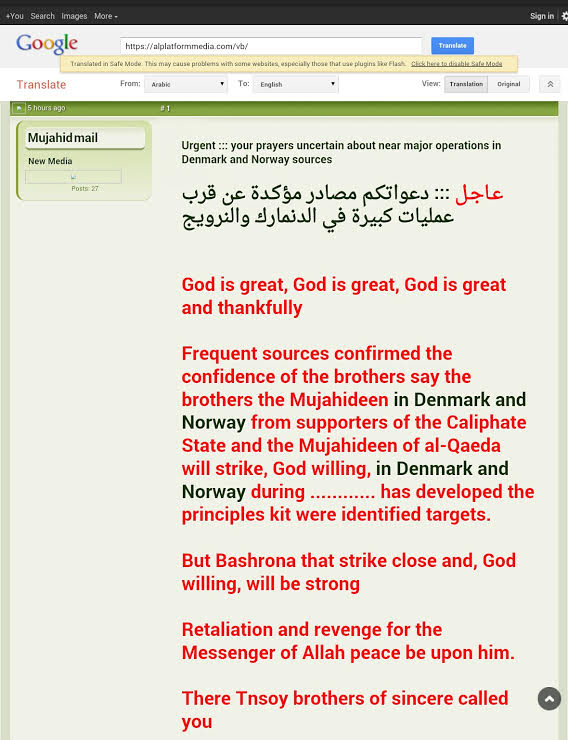