Why Stopping Net Neutrality Starts with Protecting Freedom and Capitalism

As people interact daily on in the Internet, they typically do not think twice about how they are connected to “all the things” and each other. Maybe it will enter their minds a little bit more now thanks to the FCC effectively turning the Internet into a public utility with Net Neutrality. Of course, it is anything but neutral, evidenced by the motives behind it and proponents of it.

Denying that Net Neutrality is probably step one for leftists that are hoping to be able to control information is just as foolhardy as it is to cry to the rafters about a conspiracy brewing. That makes this a particularly difficult issue to address effectively. However, when it is placed with another portion of the world of technology that is under attack for similar reasons, an undeniable pattern begins to emerge.

While most areas of technology are growing without much hindrance, there is one sector that is suffering from a severe attack on freedom. There are activists attempting to shape the future of this portion of the industry, primarily by squashing free speech and attacking capitalism itself. Normally, technology succeeds or fails simply on the whims of the consumer market, but in this area, there is real pressure for developers and manufacturers to avoid certain kinds of products, in spite of the fact that they still enjoy a great deal of popularity on the market. If this was coming from within the ranks of developers at least, this might not be as disturbing. The fact is that it's being driven by a critic that is attempting some social engineering on a small scale, with wide-reaching consequences.


Hatch, of Utah, and Ryan, of Wisconsin, sent the letter to [Treasury Secretary Jack] Lew after the White House signaled Obama is interested in eliminating some tax breaks through executive action, particularly those that benefit large corporations and the wealthy. […] Republicans are hoping to reform at least part of the corporate tax code in the coming year and are relying on cooperation from the White House in order to strike a deal that can become law.

The GOP would like to lower corporate tax rates in a deal that could include ending some tax benefits. Obama has proposed using the revenue expected to flow from ending some tax cuts in order to pay for infrastructure rather than to lower corporate rates.
Ryan and Hatch, both Republicans, warned Obama that acting unilaterally could hurt the economy and thwart any chance of a lasting deal that could be achieved with Congress.

"It would be a significant setback if you decided to interpret or implement tax laws based on your political preference rather than the consensus that the tax reform process could produce," they wrote to Lew. "It would also be significantly damaging to the economy to further the idea that, rather than working with stable rules of the road, tax and other laws will hereafter evolve according to the uncertain path of unilateral executive decisions followed by controversy, challenges and mistrust."

Pentagon loses track of $500 million in weapons, equipment given to Yemen

There are “fears that the weaponry, aircraft and equipment is at risk of being seized by Iranian-backed rebels or al-Qaeda, according to U.S. officials.” Combine this with the weapons Obama gave to “moderate rebels” in Syria that are now being used by the Islamic State, and the U.S. has provided weapons to a significant segment […]

While Obama plots his revenge on the tiny Jewish state, the EU has congratulated Prime Minister and Congress wrote a superb letter of congratulations and support letting Prime Minister Netanyahu and the people of Israel that’s we stand with them.

Obama has tried to make Israel a bipartisan issue and in many ways he has succeeded especially with the radical wing of the Democrats.

And the antisemites in the European media is making hay of Obama’s vindictive ugliness.

All signatories can be seen here.  Thanks to Jim.


The EU congratulated Prime Minister Binyamin Netanyahu on his election victory Wednesday, but added it was committed to relaunching the peace process which he appeared to repudiate during the campaign by...

“Against all odds, against all odds, we achieved this huge victory for Likud...We achieved the huge victory for our people. And I am proud, I am proud for the people of Israel that in the moment of truth, knew to make the right decision and to choose the real material things over immaterial things."
- Israeli Prime Minister Benjamin Netanyahu on his overwhelming 'supposedly' come from behind election win*

The polls taken before Israel's general election were wrong...so very wrong...as exit polls from the actual Tuesday election itself gave the world just a hint of what was to come...Benjamin Netanyahu...the world's last great statesman...had resoundingly won an unprecedented fourth term as Israel's Prime Minister and stood ready to form a new coalition government. And even though Israeli President Reuven Rivlin said he would like to see a true unity government combining both Labor and Likud party members...Netanyahu's resounding win...with almost 72% of those eligible to vote going to the polls...allows him to build a coalition government of his own choosing. 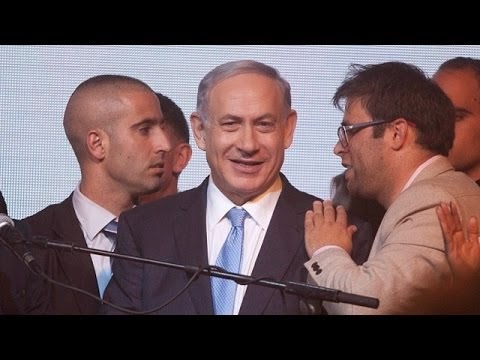 So when the dust settled, Netanyahu’s Likud party had secured (at the time of this writing) 30 Knesset seats versus the Labor party’s 24 seats...leaving center-left Zionist Union candidate Isaac Herzog (the son of a former president and grandson of a prominent rabbi)...and his running mate centrist Hatnuah party leader and former finance minister Tzipi Livni...anything but happy campers, especially since both were willing to trade land for peace... including turning over East Jerusalem to the Arabs for the capital of a Palestinian state. And while Herzog can still grasp at straws and try to cobble together his own coalition of sorts to try and block Netanyahu's agenda, the numbers for him to do so are (thankfully) simply NOT there. (See Isaac Herzog concede defeat and congratulate Netnyahu here: https://www.youtube.com/watch?v=ETjf1wVwdTM)) 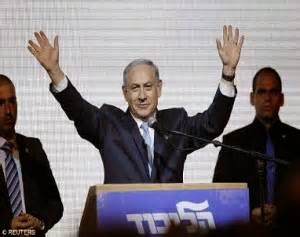 Simply NOT there as Netanyahu will be able to build his coalition from the top eleven right-of- center parties that drew enough votes to seat their...and his...candidates in the Knesset. In fact, the new government will most likely be comprised of right-wing and Orthodox parties, including Naftali Bennett's pro-settlement Jewish Home; former Likud Minister Moshe Kahlon's Kulanu party who won nine or 10 Knesset seats and is a center-right party focused on economic issues (Kahlon was so happy with the results that he tweeted that the election results, with over 99% of the tally in, was a “great success”); Avigdor Lieberman's hard-line nationalist Yisrael Beiteinu party; and with leaders of the ultra-Orthodox Shas and United Torah Judaism parties; giving Netanyahu a majority of 67 seats in the 120-seat Knesset with the Likud party commanding 30 seats for themselves. 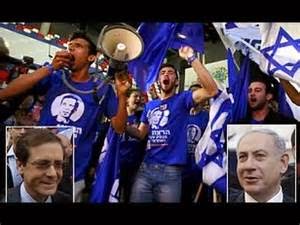 So contrary to all the naysayers, Netanyahu's making Israel's security the center touch-point of his campaign was a wise move that overwhelming resounded with Israeli's, especially with his hammering home the point that the U.S. under the current stewardship of Barack HUSSEIN Obama was on the verge of selling the Jewish state out to those determined to wipe them off the map. And for proof of this Israeli's had to look NO further than Obama's snub when BiBi spoke before Congress in early March, and in Obama's tangible selling Israel out to such a degree that he even sent his crack re-election team to Israel...via the One Voice Movement...to work against Netanyahu's re-election by pouring money and resources into an 'Anyone But Bibi' campaign.

Now add in that right before the election Netanyahu posted a video on Facebook outlining how those on the left were busing in "huge amounts" of Arabs...who make up a full 20% of Israel's population...to vote against his Likud party. Can you say shades of Obama and his supporters busing in unregistered voters who nevertheless voted two, three, and four times...making BiBi's above said touch-point well taken.

Throwing down the gauntlet by saying that there would be NO Palestinian state as long as he is Prime Minister...Netanyahu NOT only called Obama to task but also assured Israelis that there would be NO more sell-out of their land...all while Obama's team was continuing to stir-up NOT only Israel's leftists but the muslim-condoning European leaders as well...leaders who so-wanting to see Obama's anything but peace talks result in a Palestinian state...forgetting the non-existent 'so-called' Palestinians already have a state and it's called Jordan.

And know that Obama and his fellow Israel-hating, Jew-hating, Netanyahu-hating cronies...cronies like David Axelrod who claimed Netanyahu's “shameful 11th hour demagoguery” and fear mongering may have swayed enough votes to save him...were closely monitoring the election results as they came in. And how they must having been besides themselves when the media had to start reporting a truth they could NO longer hide...a truth that pro-Netanyahu right-of-center parties came out to the polls in numbers way beyond what they had predicted. And this makes BiBi's win...the Likud party's win...the ultimate and rightful 'bitch-slap' upside the head of our traitor-in-chief and his cronies who still want Israel to return to her pre-'67 now indefensible borders...and who will now work to do as much damage to Israel and Netanyahu as possible in the time they have left to so.

So the bottom line is this...Israeli's did the right thing for their country by re-electing a hawk who will keep them and Israel safe NOT a dove who will sell them out. And as an added bonus they get to see Obama cringe and cower in fear as he must now deal with a rightfully furious Netanyahu for these last two years of his...as former Vice President Dick Cheney says "worst president in my lifetime"...presidency.

And the Israelis who have been told time and again by Obama that he “has their back,” finally realized Obama only wants their back so he can hold them place as he sinks his knife neatly and stealthily into it. And they now get to see the real vile islamic face of Barack HUSSEIN Obama who still has only congratulated the Israeli people for a successful election process, but who willfully continues to ignore and NOT congratulate the winner himself... Benjamin Netanyahu...whose very name he now refuses to say or even acknowledge...whiny crybaby and sore-loser that he is.

So as John Podhoretz put it in his New York Post column yesterday morning: “He (Netanyahu) gambled his entire career and he won, just as he did with the speech in front of Congress earlier this month...hearty congratulations are in order.”

YES they are...oh yes they are. And so to the Israeli people I say...job well done...to Prime Minister Benjamin Netanyahu I say thank-you for standing strong against those known to oppose you and those we've long suspected of opposing you. And may God's chosen people forever live and rule over the land of Israel.

And to that I and so many others say “amen."