With the future of Obamacare replacement legislation very much in limbo -- with new signs of movement still cropping up -- conservative activists' attention has turned to a pair of potential executive actions President Trump could take to alter the trajectory of the failing law.  Each action would be entirely defensible from a legal standpoint, as both entail ending Obama-era payments that Republicans have consistently and convincingly lambasted as illegal.  That being said, one is much more politically palatable than the other.  The president alluded to this pair of issues in a weekend tweet:

See tweet and read entire article here: https://townhall.com/tipsheet/guybenson/2017/08/01/congress-obamacare-exemption-n2362489
Posted by Diane Sori at 9:56 AM No comments:

Trump: Bannon Is Wrong, I'm Not Raising Taxes on the Rich

"No, that was not right," Trump told The Wall Street Journal in an interview Friday. "That was not a correct statement, no."
According to a full transcript of the interview obtained and published Tuesday by Politico, Journal editor-in-chief Gerard Baker asked Trump about Bannon's 44 percent plan.

Most Americans have no idea how severely imperiled the freedom of speech really is. I discuss in detail in my new book The Complete Infidel’s Guide to Free Speech (and Its Enemies). But as this fundamental freedom slips away, most people don’t even care. Look: Kardashians! “Court: Residents Can’t Mention ‘Islam’ or ‘Muslim’ At Public […]

Saudi grants are available for:


Projects may include, but are not limited to:
Academic and professional lectures, seminars and speaker programs;
Artistic and cultural workshops, joint performances and exhibitions;
Cultural heritage conservation and preservation projects;
Cultural, professional and academic exchanges and projects;
Professional development workshops and training.

And we came cheap at the price. Look at the zombies coming out of American universities.

As a matter of fact, the scale of the donations is far beyond a handful, the universities involved are among the top academies in the world, the money involved is hundreds of billions of dollars, and the targets of Islamic finance are, for the most part, specific and form part of a distinct agenda. 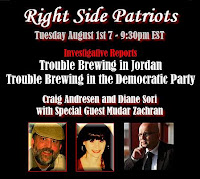 RIGHT SIDE PATRIOTS...for those who missed last night's broadcast (or just want to listen in again) where Craig and Diane discussed their two Investigative Reports: 'Trouble Brewing in Jordan' and 'Trouble Brewing in the Democratic Party,' and where they welcomed special guest Jordanian Opposition Coalition Secretary General Mudar Zahran to the show...you can listen to it at your convenience on SoundCloud at: https://soundcloud.com/right-side-patriots-260798913/right-side-patriots-80117
Posted by Diane Sori at 8:30 AM No comments: