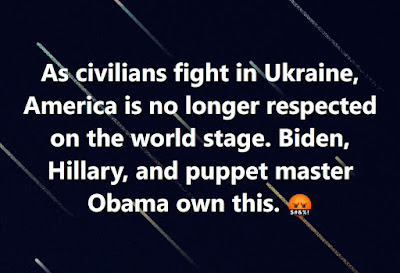 The battle for Kyiv was underway — with explosions and gunfire reported in the Ukrainian capital — as Russian forces forged on with an aggressive overnight offensive Friday into Saturday.

Ukrainian officials warned Kyiv residents to shelter in place as street fighting continued in the city into the morning. The alert advised people to remain in shelters and stay away from windows and balconies to avoid being struck by debris or gunfire.

Hundreds of casualties have already been reported in the wake of the assault. Russian shells demolished apartment buildings in Kyiv and schools and bridges were also destroyed.

According to Health Minister Viktor Lyashko, 198 Ukrainians have been killed in Russia’s attacks. Three victims were identified as children. Over 1,000 people were wounded as of Saturday morning. Read more here.

Email ThisBlogThis!Share to TwitterShare to FacebookShare to Pinterest
Poll: Majority Believe Putin Would Have Known Better Than to Invade Ukraine if Trump Was President
Rebecca Downs / Townhall Tipsheet

President Joe Biden has been in office for just over a year and there's already been two foreign policy crises under his watch, with the catastrophic withdrawal from Afghanistan and now the Russian invasion of Ukraine. A Harvard Center for American Political Studies (CAPS)-Harris Poll released on Friday, though, shows that a majority of voters believe Vladimir Putin would not have invaded if former President Donald Trump was in office.

A majority, at 59 percent, also responded that they believe Putin made such a move because he saw a weakness in President Joe Biden. Forty-one percent responded that it was not a factor. Read more, see tweets and video here.

Email ThisBlogThis!Share to TwitterShare to FacebookShare to Pinterest
RIGHT SIDE PATRIOTS...PodCast

If you missed last night's show where RIGHT SIDE PATRIOTS Craig Andresen and Diane Sori discussed the latest happenings in Ukraine; the only sanction that will work; Kyiv under attack; President Zelinsky stands strong against Putin; and Ukraine's heroes....you can listen to it (and previous shows) at your convenience at: https://rspradio1.podbean.com/e/right-side-patriots-22522-topics-ukraine-sanctions-kyiv-under-attack/ (our RSP website link via Wordpress is still having issues) to go directly to our podcasts and hope you become 'followers' of RIGHT SIDE PATRIOTS.