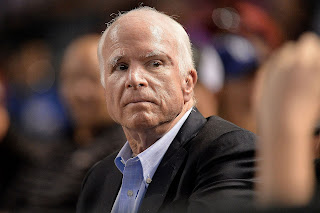 Email ThisBlogThis!Share to TwitterShare to FacebookShare to Pinterest
RIGHT SIDE PATRIOTS...for those who missed last night's show (or just want to listen in again) where Craig and Diane discussed 'Space Force...Separate But Equal'; 'Omarosa...Unhinged, Unglued and Un-American'; and important news of the day...you can listen to it at your convenience on SoundCloud at:  https://soundcloud.com/right-side-patriots-260798913/rsp-arch-8-24-18

...Additionally, because of our much tougher Trading stance with China, I do not believe they are helping with the process of denuclearization as they once were (despite the UN Sanctions which are in place)...
— Donald J. Trump (@realDonaldTrump) August 24, 2018

...Secretary Pompeo looks forward to going to North Korea in the near future, most likely after our Trading relationship with China is resolved. In the meantime I would like to send my warmest regards and respect to Chairman Kim. I look forward to seeing him soon!
— Donald J. Trump (@realDonaldTrump) August 24, 2018

Why is California so anxious to celebrate Muslims? Because of the widespread assumption on the Left that they are victims of regular persecution, harassment and discrimination in the U.S. This is false, but the claim is a potent weapon that leads to Islamopandering such as we see here. “California Celebrates Islam Once Again, but SURPRISE, […]
Read in browser »

By Gerald Lostutter / THE GELLER REEPORT

Dear readers, you are jurors sworn-in to decide a battle of “unindicted co-conspirators.”

On one side: U.S. President Donald J. Trump is designated an “unindicted co-conspirator,” alleged U.S. Senator Bernie Sanders (I-VT) via tweet (posted; 08-22-18), without any evidence.

On the other side: The Council on American-Islamic Relations is designated an “unindicted co-conspirator” based on “prima facie” evidence in the trial of the Holy Land Foundation for Relief and Development, wrote a Judge, as detailed below.

The following analysis is presented for your review.

Skip the legalese, define it in plain English

Read entire article here:  https://gellerreport.com/2018/08/unindicted-trump-cair.html/
Posted by Diane Sori at 7:47 AM No comments: