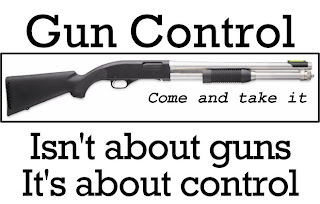 Using, for political expediency alone, the Newtown tragedy as a rallying cry, Uncle Joe 'Bite-Me' Biden has been bloviating whenever and wherever he can that Obama is considering implementing either an Executive Order or an Executive Action as a means to achieve gun control. And why... because Obama knows he can't get a gun control bill through Congress, as most Republicans, particularly those in the House, have made it clear that they intend to oppose most if NOT all of his gun control plans.

An Executive Action, meaning NO Congressional approval is needed for Obama's wanted gun control measures, would include actions by the Justice Department, who now would be able to prosecute people who lie on their background checks.  And who heads the Justice Department...none other than the biggest liar of all...AG Eric Holder.

Hide your guns folks...this is going to get nasty.

Saying Obama will do 'what needs to be done' (and we know this means trying to take away our Second Amendment right to keep and bear arms), Uncle Joe made it clear that doing nothing about 'gun violence' was not an option as far as he and Obama were concerned.

'Gun violence'...how convenient that all forget that guns are NOT violent...a few nuts using them for nefarious purposes are the violent ones. Nothing like punishing the many (and an inanimate object) for the actions of a few...and a very few at that.

And to achieve his true objective of disarming 'We the People' (so we can never rise up against him and his traitorous administration), Obama wants, in NO uncertain terms, a more effective reinstatement of the lapsed assault weapons ban, limits on high-capacity magazines, stiffer penalties for carrying guns near schools, better enforcement measures, a gun-trafficking statute, improved databases for loophole-free background checks (such as strengthening the database the FBI uses to perform background checks on gun buyers)...and the banning of private gun sales.

Obama could also demand that the states share more information from their crime and mental-health databases...basically overriding state's rights.

And today, Uncle Joe and his group of gun-hating cronies will meet with representatives from the NRA, who oppose any new gun control measures.  But having this meeting is for show anyway as both Biden and Obama will turn a blind eye to anything the NRA has to say, especially in regards to semi-automatics, because they simply do NOT understand (or want to understand) that despite appearances, an AR-15-style rifle is NO more dangerous than any other gun.  And instead of gun control, the NRA wants to improve the quality of mental health care in hopes of avoiding another Newtown, as well as placing armed guards in schools...I mean Obama and his buddies all send their kids to schools with armed guards...our children should be afforded the same protection as theirs get.

These are logical, sensible steps that could be used to help stop violence, note I did NOT say gun violence as there is NO such thing, but Obama is NOT interested in stopping violence...all he wants to do is to disarm the citizenry...to leave us naked and vulnerable to his whims...to his wants...to his rules of law instead of abiding by the true law of this land...the Constitution.