Just a Thought...
ILLEGALS Over Citizens as the Government Shuts Down
By: Diane Sori / The Patriot Factor

Last night in a vote of 50 to 49 the government shut down as the Democrats sent the message to 'We the People' that ILLEGALS...that DREAMERS...are more important to them than American citizens and our military. Shutting down certain government programs that affect us all...what these Democrat miscreants do NOT tell you is that they will still continue to get paid. No furloughs for them...NO cutbacks for them...yet our military's pay will be held up. Are you mad yet...I certainly hope so especially as the midterms fast approach.
Posted by Diane Sori at 10:00 AM No comments:

Republican leaders blamed their Democratic counterparts after the Senate failed to pass a spending bill by midnight Friday to avert a government shutdown.
Senate Majority Leader Mitch McConnell and the GOP needed 60 votes to pass a measure that would have kept the government running until mid-February, but not enough Democrats went along with the plan. The tally was 50-49, with five Democrats voting in favor of the measure and five Republicans voting against it.

“Most of the stuff we agree on. One reason we ended up here, the shoehorning of illegal immigration into this debate,” McConnell said after the vote failed, adding that the Senate would resume talks later Saturday to prevent a prolonged shutdown. 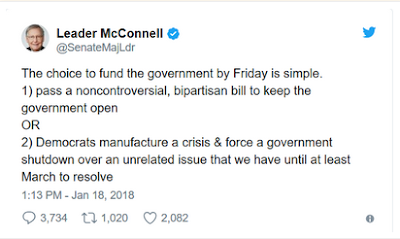 At the center of the soured negotiations was the Obama-era DACA (Deferred Action for Childhood Arrivals) program, which has protected some young immigrants from deportation.

CAIR is an unindicted co-conspirator in a Hamas terror funding case — so named by the Justice Department. CAIR officials have repeatedly refused to denounce Hamas and Hizballah as terrorist groups. Several former CAIR officials have been convicted of various crimes related to jihad terror. CAIR’s cofounder and longtime Board chairman (Omar Ahmad), as well as its […]
Read in browser »

Posted by Diane Sori at 9:29 AM No comments:

Email ThisBlogThis!Share to TwitterShare to FacebookShare to Pinterest
RIGHT SIDE PATRIOTS...for those who missed last night's show (or who just want to listen in again) where Craig and Diane discussed 'A U.N. Migration Free-for-All'; Trump Derangement Syndrome; and important news of the day...you can listen to it at your convenience on SoundCloud at:
https://soundcloud.com/right-side-patriots-260798913/rsp-arch-1-19-18

Posted by Diane Sori at 9:11 AM No comments:

The U.S. State Department announced it was withholding an additional $45 million from the United Nations Relief and Works Agency for Palestine Refugees, UNRWA.

That’s in addition to the $65 million that Washington, D.C., just announced it was withholding.

If you thought “Palestinians” were angry a few days ago, when the $65 million cut in aid was announced — just wait.

The Times of Israel has the story:

The United States will not provide $45 million that it had pledged last month to the UN Agency for Palestinian Refugees, Reuters reported a State Department spokesman as saying Thursday.

Read entire article and see video here: https://pamelageller.com/2018/01/u-s-state-department-withholds-additional-45-million-unrwa.html/
Posted by Diane Sori at 9:05 AM No comments: