As George H.W. Bush is laid to rest the last of the 'Greatest Generation' of leaders gets laid to rest with him. May his and their values of service, country, valor, and honor not be buried with him but live on through we American patriots now picking up the sword of truth and the light of freedom. Rest now Mr. President you served your country well. #Diane Sori 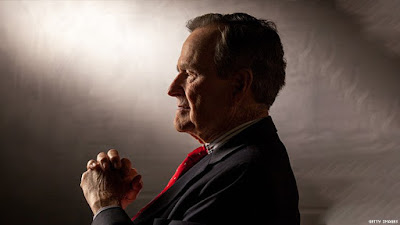 Posted by Diane Sori at 5:48 PM No comments:

Email ThisBlogThis!Share to TwitterShare to FacebookShare to Pinterest
George H.W. Bush's Funeral Service at the National Cathedral (In Full)

For any who missed yesterday's full service for President George H.W. Bush at the National Cathedral, here it is in it's entirety. 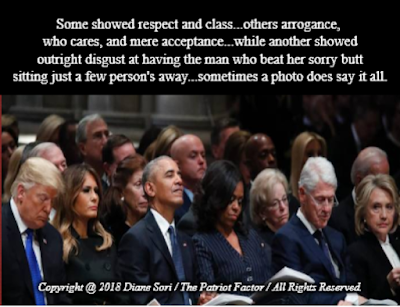 Sen. Jeff Flake (R-AZ) is leaving, but not quietly. The immensely unpopular Republicanhas decided to totally trashhis party’s judicial agenda. Flake is the key 11thvote on the Senate Judiciary Committee, and he’s not budging until Senate Majority Leader Mitch McConnell holds a binding vote on a billprotecting Special Counsel Robert Mueller and the Department of Justice’s Russia investigation. It’s frustrating. It’s deplorable. And it just comes to show you why Flake would never have won re-election if he decided to execute a suicidal banzai charge concerning that effort. He would have been knocked off in a primary, but I digress. The Senate Judiciary Committee has pushed back votes on judges. In all, he’s holding up the advancement of 21 judicial nominations, along with the confirmation of an additional 32 nominees whose votes are now stalled on the floor (via CNN):

Grassley postpones judiciary committee meeting AGAIN. Flake still holding out until he gets special counsel vote on the floor. McConnell has b locked it.
— Alana Abramson (@aabramson) December 5, 2018

All Zuckerberg cared about was these documents not seeing the light of day. Who the hell does he think he is that the American judicial system should protect such a scoundrel? Worse still, a U.S. judge had ordered the papers remain secret, but a British MP defied the order.

In one of the emails, Zuckerberg candidly admits that Facebook’s interests aren’t always aligned with those of its users and the broader world.