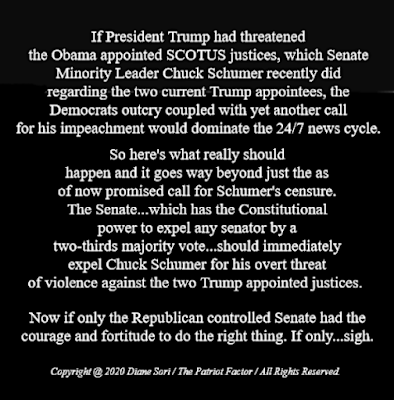 "This morning, Senator Schumer spoke at a rally in front of the Supreme Court while a case was being argued inside Senator Schumer referred to two Members of the Court by name and said he wanted to tell them that 'You have released the whirlwind, and you will pay the price. You will not know what hit you if you go forward with these awful decisions,’” Roberts said. “Justices know that criticism comes with the territory, but threatening statements of this sort from the highest levels of government are not only inappropriate, they are dangerous. All Members of the Court will continue to do their job, without fear or favor, from whatever quarter."

Email ThisBlogThis!Share to TwitterShare to FacebookShare to Pinterest
‘100% Republican’ — Cuban Americans high on Trump as 2020 ramps up in Florida
By Geller Report Staff

Perhaps no other ethnic group in the United States understand how dangerous the Democrat Party has become than Cuban Americans. In fact, the current front runner of the Democrat Party has openly embraced the brutal Castro Regime. As such, expect Cuban Americans (particularly in Florida) to vote for President Trump in droves this November. #Trump2020

“Cien por ciento Republicano,” a worker on the factory floor shouted to Rep. Mario Diaz-Balart as he toured a local manufacturer of industrial, walk-in coolers and freezers.

Posted by Diane Sori at 7:05 AM No comments: