The House passed resolution Monday that urges President Obama to provide Ukraine with military assistance in its struggle against Russia. The measure was well received in Ukraine.

Ukrainian Minister of Foreign Affairs Pavlo Klimkin took to Twitter on Tuesday morning to show his enthusiasm for the resolution:

I thank US House of Representatives for a resolution calling to provide Ukraine with military assistance. Important that Res is bipartisan.


U.S. weapons sent to Ukraine could effectively assist forces fighting for the liberation of Crimea.


“We do need this precision weaponry and our armed forces in the south in particular need to be modernized," said Refat Chubarov, the leader of the Crimean Tatars, in a statement reminding the European Parliament that the region still awaits assistance. "The war against Ukraine started with the occupation of Crimea and the war against Ukraine may only be ceased with the liberation of Crimea.”

The resolution passed the House 348 to 48, with bipartisan co-sponsorship.

“We cannot view the crisis in Ukraine as just some faraway conflict or someone else’s problem,” said Rep. Eliot Engel (D-NY), Democratic leader of the House Committee on Foreign Affairs and sponsor of the resolution. “What Putin is doing is he’s changing borders by force on the continent of Europe for the first time since World War II,” he added. “This cannot stand. The United States cannot turn a blind eye to it.”

The “Transformative” Tyranny of Mandatory Voting

The longer Barack Obama serves in office, the more difficult it becomes to really consider him as “President of the United States.”

The man’s respect for, and his understanding of, our form of government appears to diminish with each speech he gives, and with each action he takes as President. Still, he is if nothing else, consistent.

Barack Obama has been consistently truthful with the American people in telegraphing his desire of “fundamentally transforming” the United States of America. He exhorted citizens to do precisely that by voting for him in 2008. His signature legislative victory – Obamacare – delivered in 2010, is in the final stages of transforming health care in America from a system driven by the doctor-patient relationship, to one controlled from start to finish, and directly or indirectly, by government.

Obama’s drive to “transform” has not stopped at the ocean’s edge. Through a continuing series of inept moves in the Middle East, Russia, and elsewhere, he has succeeded in transforming America from an influential world superpower, to a nation as much mistrusted as respected on vital security matters.

As disturbing as are these realities, even more frightening is the extent to which Obama yearns still to dislodge America from its foundation as a nation unique in placing individual liberty at the pinnacle of political power. His clear objective is to transform us into a society in which government mandates control virtually every aspect of citizens’ lives.

Obama’s latest plan is to transform the “right” to vote into the “requirement” to vote.

DHS secretary Jeh Johnson says reading of Quran reminds him of quintessential American values #mpacempowers pic.twitter.com/fDGLYa26m5 — Nasreen Hosein (@NasreenHosein) March 18, 2015 Yeah, you know — quintessential American values like…slaying infidels wherever you find them: 2:191-193: “And slay them wherever you come upon them, and expel them from where they expelled you; persecution is […]

Posted by Diane Sori at 8:57 AM No comments:

President Obama referenced Yemen as a success during a speech in which he outlined a four-part plan to combat the Islamic State in September.


The humiliating denouement to America’s involvement in Yemen came over the weekend, when U.S. Special Forces were forced to evacuate a base from which they had operated against the local branch of al Qaeda. This is the same branch that claimed responsibility for the January attack on Charlie Hebdo and has long been considered to pose the most direct threat to Europe and the United States. So who should Barack Obama be declaring war on in the Middle East other than the state of Israel?

So who should Barack Obama be declaring war on in the... 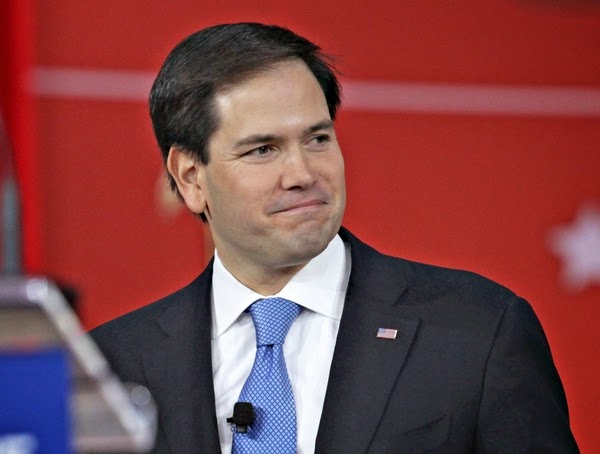 Florida Sen. Marco Rubio is pinning his presidential hopes on the prospect that Republican voters will have the troubled world on their minds in the 2016 primaries — and that they'll see a 43-year-old freshman lawmaker who argues for an aggressive U.S. posture abroad as the best candidate to take on global crises.

For Rubio, who remains unknown to many Americans, it's a gamble of necessity as he searches for a way to break through the GOP pack.

In an interview with The Associated Press, Rubio said tumult in the Middle East, Eastern Europe and Latin America may drive voter interest in foreign policy higher than at any point in the last decade, despite the fact that international issues barely registered for voters in the last Republican primary and general election. He also previewed a campaign message that links U.S. economic prosperity to stability around the world.
"We're 4 to 5 percent of the world's population," Rubio said. "So for us to grow our economy robustly and provide more economic opportunity to more people, we need to have millions of people around the world that can afford to trade with us, that can afford to buy our products and our services."

Even in the 2008 election, when worries about terrorism and weariness with the long, expensive and deadly conflicts in Iraq and Afghanistan were elevated in people's minds, the economy was by far the biggest concern of voters surveyed in exit polls, cited by 63 percent as their main issue.

But William Galston, a former policy adviser to President Bill Clinton and Democratic presidential campaigns, said current crises, combined with improvements in the economy, could make Rubio's bet on foreign policy a wise one.

"Changes in the world over the past year or two have been pretty alarming," Galston said. "There isn't much that's gone right for the United States but there are a fair number that have gone wrong."

If voters do care about foreign policy, though, there's a risk for Rubio that they may not consider him seasoned enough. President Barack Obama faced that criticism in his primary and presidential campaigns as he sought the White House in his 40s while serving his first term in the Senate.

Whoever wins the GOP nomination may face Hillary Clinton, who served four years as secretary of state and has no serious rivals for the Democratic nomination as yet, if she runs as expected.

Rubio is expected to announce his presidential campaign within weeks.

Today, Wednesday, March 25th, from 2 to 4pm EST, RIGHT SIDE PATRIOTS Craig and Diane present a very special show with their special guest 'common sense' Palestinian leader Mudar Zahran who will sound the last call for peace before impending disaster with the presenting, for the first time anywhere, of his peace plan known as 'Operation David.' Also being discussed will be the issue of Ted Cruz's eligibility. 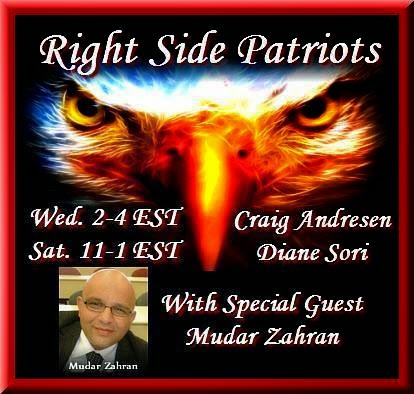