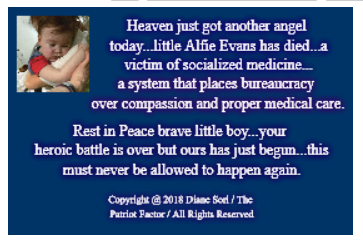 
by Sarah Rumpf / Red State
Alfie Evans, the toddler caught in a legal battle between his parents and the British National Health Service, has passed away.


Tom Evans, the father of the 23-month-old child, announced the news on Facebook, saying he passed away at 2.30am.

Kate James, Alfie’s mother, wrote: “Our baby boy grew his wings tonight at 2:30 am. We are heart broken. Thank you everyone for all your support.”

Alfie suffered from a rare neurological disease and Alder Hey Hospital in Liverpool had declared him terminally ill, beyond the hope of recovery. A judge had ruled in February that the hospital could stop providing treatment, against the wishes of his parents. Alfie’s life support machines were turned off on Monday, but he had continued breathing on his own for several days.

His parents had been fighting in court to take him to Italy for an experimental treatment, but were denied, even though all costs would have been paid by donations and Italy had even granted citizenship to the young boy to facilitate his entry into the country.

The story has captured international attention as part of the debate regarding the proper roles for government, health care, as well as the right to life — not just to be born, but to be able to live a natural life with dignity, regardless of the government’s assessment of what quality of life they deem to be worthwhile.

Alfie’s parents have been tireless advocates on his behalf, even finally conceding they could not defeat the might of the British government and trying only to be able to bring their little boy home to die in a more comfortable setting than the hospital.

Alfie would have been two years old on May 9th. Requiescat in pace.
Posted by Diane Sori at 11:13 AM No comments:

In his famous outreach speech to the Islamic world from Cairo on June 4, 2009, Barack Obama said: Islam has a proud tradition of tolerance. We see it in the history of Andalusia and Cordoba during the Inquisition. I saw it firsthand as a child in Indonesia, where devout Christians worshiped freely in an overwhelmingly […]
Read in browser »

In what’s going to go down as one of the most remarkable historical acts of all time, North Korea’s Kim Jong Un crossed over to South Korea and stood with President Moon Jae-in to start talks about nuclear peace.

This is the first time Kim has stepped foot on South Korean soil — and it’s due in large part to President Donald Trump’s pressing and bold leadership.

If this were Barack Obama, the mainstream media would be clanging loud drums and cheering in the streets.

But as it is — history will show the occasion as stemming from Trump’s bold leadership just the same.

The Associated Press has more:

Read entire article and see video here: https://gellerreport.com/2018/04/trump-effect-kim-jong-un-makes-history-crosses-south-korea-nuke-talks.html/
Posted by Diane Sori at 9:43 AM No comments: