Update on April the Giraffe's Baby Boy
By: Diane Sori / The Patriot Factor

April's 2-week old baby boy now has a name...it's 'Tajiri' (a Swahili name) and it means hope and confidence...hope for the giraffe's future and confidence that giraffes will be here for future generations thanks to breeding programs like at Animal Adventure Park. Such a sweet little boy...enjoy life little one...it will be a good one. 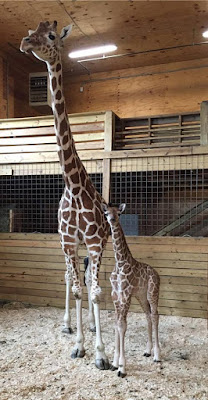 An embassy official said Mike Pompeo and his wife were in the South Korean capital on Monday, but wouldn't say for how long.

He spoke on condition of anonymity because he was not authorized to speak to the media.

South Korean media reports said the CIA chief arrived in South Korea over the weekend for meetings with the head of South Korea's National Intelligence Service and high-level officials in the presidential office. The U.S. official, however, wouldn't confirm any meetings beyond ones with officials at U.S. Forces in Korea and the U.S. Embassy.

The visit comes after North Korea conducted another missile test on Saturday, and a U.S. aircraft carrier group was in nearby waters. A Japanese destroyer left port Monday, reportedly to escort U.S. naval ships as Japan increases its military role in the region.

The Japanese destroyer Izumo, a helicopter carrier, departed from Yokosuka port south of Tokyo in the morning.

Email ThisBlogThis!Share to TwitterShare to FacebookShare to Pinterest
Eight-year-old son of Islamic State jihadi asks father, “How do you kill a non-Muslim?”

The Islamic State’s rhetoric is entirely and consistently framed in Islamic terms. The Muslims who claim that the Islamic State is not Islamic have never made any attempt to disabuse the jihadis, even at a safe distance, from their misunderstanding Islam. Mainstream analysts should consider the implications of that, but they won’t. These boys are […]

U.S. House and Senate negotiators reached a tentative bipartisan deal Sunday night on a $1.1 trillion bill to keep the government open through the end of September, according to Republican and Democratic aides.

GOP leaders eager to focus on health care and tax overhauls bowed to Democratic demands to eliminate hundreds of policy restrictions aimed at curbing regulations from the bill, leaving the Trump administration with few victories.

The White House sought funding to begin building the border wall, a well as $18 billion in cuts to domestic agencies, and both demands were rebuffed. The spending deal includes money for Planned Parenthood, despite Republican demands to defund the group over its provision of abortions. The deal’s provisions were described by aides on condition of anonymity ahead of a formal announcement.
President Donald Trump will be able to point to a $15 billion boost for the Pentagon, although $2.5 billion of that money is contingent on the administration delivering a new plan to fight Islamic State.

Trump also will get a $1.5 billion for border security, but it can’t be used for the border wall or additional Immigration and Customs Enforcement agents, according to a congressional aide. There are also no new restrictions on money going to so-called sanctuary cities that don’t fully enforce federal immigration laws.

Majority of Public Ready for Action Against North Korea

A new Fox News poll shows that a thin majority of American voters believe that military action may be necessary to put an end to Kim Jong Un’s nuclear weapons program.
The national poll found that 51% of voters believe that U.S. military action will likely be needed if we want to prevent North Korea from further nuclear weapons development, while 53% support using said force.

Hmm, could we hear from the 2% of voters who think that military force is necessary…and yet don’t support the use of that force? Those have to be Jill Stein voters, right?

Gearing Up for War?

In an interview with Reuters on Thursday, President Trump said that while he was still optimistic about finding a diplomatic way to block Kim Jong Un’s path to a viable, intercontinental nuclear missile, he wasn’t ruling out the possibility of war.

“There is a chance that we could end up having a major, major conflict with North Korea.

“The media echo chamber has, I think, made it more difficult for people to express their political views, especially to live interviewers.”

Yes, and even though the enemedia was so wildly wrong about the 2016 election, they still haven’t learned their lesson, and remain as leftist and elitist and out of touch as ever.


A top strategist on Hillary Clinton’s 2008 campaign and a longtime Clinton pollster says that President Trump’s approval rating is at least 5 or 6 points higher than polls currently show.

Writing at The Hill, Mark Penn says that polls showing that Trump has a 40 percent approval rating are the result of what he calls a “polling bubble.”

“Surveys taken from the perches in New York, Washington and Los Angeles may be obscuring rather than illuminating many of the underlying views and trends of the American electorate,” writes Penn, who started polling for Bill Clinton in 1994.

Posted by Diane Sori at 9:21 AM No comments: