MANCHESTER, United Kingdom – British Conservatives are planning to make it impossible for public bodies to pursue boycotts of Israeli products. The move comes after Town Halls across the UK began effectively dictating foreign policy by voting to stop buying from Israeli companies.


From now on only countries that have been subject to official sanctions from the UK government can be boycotted. On the eve of their annual conference in Manchester a Conservative statement warned of risks to the “economic and national security” of the country from “municipal militancy”.
The ban will come into force in the shape of new rules on procurement for local authorities. There will also be rules governing council pension funds so they cannot avoid Israeli firms and UK defense contractors if they represent a good investment.
The move comes amidst growing concern over the militant actions of left-wing councils, spurred on by trade unions and the Labour leader Jeremy Corbyn. Conservatives claim these actions threaten to “poison community relations” and “harm Britain’s economic and international interests”. The ban is likely to be just one of a raft of policies, announced during the conference, aimed at exposing Corbyn as a threat to national security and peace in the Middle East.
Read more »
Posted by Diane Sori at 12:10 PM No comments:

Congressional study: Over 250 Muslims from US have joined the Islamic State
By Robert Spencer / Jihad Watch

“The government has largely failed to stop more than 250 Americans who have traveled overseas to join or tried to join terrorist groups, including the Islamic State group, a new congressional study concluded on Tuesday.” Why was it the government’s responsibility? Why isn’t it the responsibility of Muslim communities in the U.S.? Why does not […]

Going down the Pipes, Daniel

In another attack against those who are doing the heavy lifting in the fight against jihad, Daniel Pipes feebly beats a long-dead horse and establishes definitively that he has jumped the shark.

The failed Daniel Pipes exploits yet another opportunity to take a nasty swipe at the counter-jihad movement in his underhanded, snake-like fashion. This is not the first time. This time he hides behind the skirt of Fred Litwin.

Let me respond. First off, Daniel Pipes has done more damage to the anti-jihad movement than any one other individual I can think of. He does this by misleading people about the very nature of the problem we face. We expect disinformation and dissembling from the enemy, but not from one of the supposed leading...


Op-ed:
A Deafening Silence
By: Diane Sori / The Patriot Factor / Right Side Patriots on http://cprworldwidemedia.net/

Genesis 12:3: “I will bless those who bless you, and whoever curses you I will curse; and all peoples on earth will be blessed through you.”

For 45 seconds he held his stare...a deeply penetrating and chilling stare...and in that stare were the eyes of six million Jews coming back to haunt the souls of men...as Israeli Prime Minister Benjamin Netanyahu gave one of the most powerful speeches ever given before the United Nations. And on this administration's orders if you will, America's U.N. Ambassador Samantha Power and Secretary of State John 'Swiftboat' Kerry were of course NOT there to hear it.

And so the words of the world's last great statesman played on largely deaf ears for many delegates had already gotten up and walked out even before the first words ever crossed Netanyahu's lips...yet his icy stare shamed them all for their complicity of silence in wanting to have the Jewish State of Israel wiped off the map. And with this newest snub proving to be just another in a long line of snubs by the U.N. and its member nations, Israel still righteously continues its sentinel watch, but know that Israel now stands alone in keeping the demons from hell at bay.

“Israel is civilization’s frontline in the battle against barbarism,” were Netanyahu's exact words yet Israel...the only member nation NOT allowed to sit on any of the U.N. special committees and the only member nation condemned by the U.N. time and again for simply defending itself...is like Netanyahu stated, “defending you”...meaning that without Israel as a buffer the entirety of the Middle East would have long ago fallen to those out to kill us all. And in Netanyahu's saying that the Iran deal “doesn’t make peace more likely, but by giving Iran billions of dollars in sanctions relief the deal makes war more likely,” he spoke a truth that few want to hear...a truth that should be even more obvious with the recent incursion of Iranian ground troops into the escalating Syrian conflict. 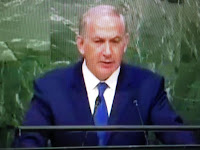 “The greatest danger facing our world is the coupling of militant Islam with nuclear weapons,” Netanyahu said, quickly adding, “And I'm greatly concerned that the deal with Iran could be the marriage certificate of this unholy union,” knowing full well that the savages at Israel's door will NOT stop there for once that door is opened many more doors opening will surely follow until the enemy stands at the door to America with Obama's already laid out welcome mat beckoning them to enter.

“Perhaps you’d be more reluctant to celebrate if the deal threatened your neighborhood,” Netanyahu said, reminding those present that Iran’s ICBMs were NOT being built for Israel who they can already reach, but were being built for targets both in Europe and America, “for raining down mass destruction, anytime, any- where.” And so the man who knew well that he was NOT only hated by those still present in the room, but that his country and his people will be forever blamed as being the root cause of all the world's troubles, now rightfully remains defiant in the face of all the fools and madmen running the world's governments today, as he stands alone as the sole voice of reason amongst the turmoil that marks the Middle East.

And know that even while he stands strong Benjamin Netanyahu is angry...very angry...for he's afraid for Israel...afraid for his people who once before were left to fend for themselves by a world that looked away. “70 years after the murder of six-million Jews, Iran’s rulers promised to destroy my country, murder my people, and the response from this body, the response from nearly every one of the governments represented here, has been absolutely nothing...” Netanyahu said, stressing how these very same nations are NOT only looking away from a truth that defines his people's past, but are now looking away from a truth that affects us all for instead of that truth coming dressed in helmets and polished boots, that truth now comes dressed in the garb of those who embrace 7th century ideologies and hatreds, and who thanks to Obama and crew, will soon be equipped with 21st weapons.

And sadly, Benjamin Netanyahu knows well that our miserable excuse of a president has abandoned NOT only Israel's safety and security but America's safety and security as well, but he also knows and has known ever since Obama's allegiances were made clear, that if need be Israel will go it alone in defending herself against those who threaten her with destruction. “Your plan to destroy Israel will fail,” he said, looking straight into the cameras as he sent a strong and uncompromising message to the rulers of Iran that NO force on Earth will threaten Israel’s future...that Israel...that he Benjamin Netanyahu...will do whatever it takes to defend the Jewish state and her people.

And 'We the People' know well what Benjamin Netanyahu means...and 'We the People' accept as fact that this brave man of valor, honor, and strength, will do what he says he will do if NO other options remain. But we also know that now, much to Obama's chagrin, that new and very important partnerships and alliances are being forged by Israel with its more moderate neighboring Arab nations who have just as much to lose if the enemy known as ISIS comes knocking on their doors.

And even though Netanyahu knows that the alliance and friendship...or what's left of it...between Israel and the U.S. must remain strong...he also knows that while the American people support the Jewish state and the Jewish people our government as it stand now does NOT...and it seems that will be the status-quo until Barack HUSSEIN Obama is NO longer America's president.

And proof of that lies with the fact that the U.S. was represented at Netanyahu's speech only by our Ambassador to Israel, Daniel Shapiro, and by U.S. Alternate Representatives to the United Nations, David Pressman and Richard Erdman. The two who should have been there, Ambassador Samantha Power and John 'Swiftboat' Kerry, were in a hastily arranged slap-in-face-to Israel video teleconference with Obama mere blocks away from where Netanyahu was speaking. And while the audience at the General Assembly interrupted Netanyahu’s speech several times with applause, these very same U.S. delegates kept their hands in their laps and their bodies in their seats...and know Benjamin Netanyahu will NOT forget this especially on the day he orders Israel to go it alone and do what needs to be done to keep Israel safe from those out to do her harm.

And on that day I too will stand strong with Benjamin Netanyahu and with the Jewish people for as Ezekiel 37:21 says, "Thus says the Lord GOD: ‘Surely I will take the children of Israel from among the nations, wherever they have gone and will gather them from every side and bring them into their own Land,’" for all men of conscious, whether Christian of Jew, know as Benjamin Netanyahu said, “The days when the Jewish people remain passive in the face of genocidal enemies...those days are over”...that Israel will remain forever and a day the land of the Jews as promised to them by God...and that NO man...that NO nation...dare to take away what God the Father has given.