Recently, the Biden administration on what was deemed the “Transgender Day of Visibility,” announced that children...minor children...supposedly suffering from “gender dysphoria” have the right to undergo both “gender reassignment surgeries” and use puberty blockers and/or cross-sex hormones. And Biden is allowing this even though long-term drug side affects and early age surgeries on such children...surgeries that involve mastectomies, breast enhancements, possible hysterectomies, and the removal (read cutting off) of male genitalia...remain to date unknown most especially in regards to future infertility issues.

Calling this action “gender-affirming health care" for children, those supporting this abomination stated that “early gender-affirming care” for so-called (but non-existent) non-binary or trans-identified minors “is crucial to overall health and well-being as it allows the child or adolescent to focus on social transitions and can increase their confidence while navigating the healthcare system.”

Translation: I believe what Joe Biden and those in his administration have really done is condone parental, governmental, and medical child abuse.

Welcome once again to the Democrats “woke” America where anything goes but the truth...anything goes if it helps to garner more Democrat votes via their targeting for special treatment yet another minority group. And know that according to the CDC, as per March 28, 2022, “transgender” individuals as a whole make up but 0.6 percent of the American adult population...as in 1.3 million adults out of 335,629,429 Americans of all ages. But hey, every vote counts when the mid-term election rolls around even if Democrats garner just the votes of the parents of “transgender” youths.

And the same group that once championed “science” (albeit Fauci manipulated “faux science”) in regards to Covid-19...in an effort to give a modicum of credence to their “scampandemic” rhetoric...sees these same folks now choosing to ignore true science and medical facts regarding what is the impossible...as in physically changing one's sex. Remember, while you can change one's outside appearance...cut off or add things and even mess around with one's insides to some minimal degree...the fact remains that one cannot...I repeat cannot...change one's DNA...DNA being the very thing that determines one's gender. Read two X chromosomes equates to one being a female, one X and one Y chromosome equates to one being a male. And here also read that only a biological female can be a biological mother and that only a biological male can be a biological father. 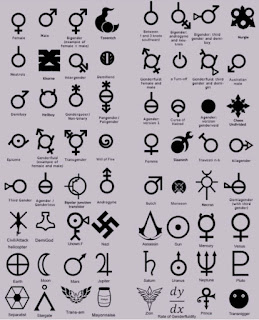 And while liberals and other assorted “messed up in the head” adults might claim that there are 57+ genders from which one can identify with, science itself says “no way” for one is born as either male or female...except for the rare “hermaphrodite” who has physical sexual characteristics of both male and female and whose true sex is determined via DNA testing. Simply, pretending to be the sex you were not born into is but “play acting” by individuals who do not need sex reassignment surgery but need serious psychological help for these folks identity is tied up not in reality but in how they “feel” about what sex they are...“touchy-feely,” kumbaya, anything goes nonsense to the nth degree.

And here I'll add that the root cause of such issues, especially when it concerns a minor child, can usually, but not always, be placed on the child's parents who for whatever reason see and treat their son as the daughter they didn't have or see and treat their daughter as the son they wished they'd had.

Remember, all children are born with a mental blank slate...a blank slate that with time, teaching, and learning coupled with their genetics forges who they are as a person...both character and sexually wise. Yet nothing done to their outward physical appearance can change their actual biological sex as there, at this time, remains no way for human DNA to be altered to such a degree that it can change one's genetic sexual code.

Now here let's make the important distinction between one's sexual identity and what's referred to as “sexuality” in regards to gay people. Simply, the overwhelming majority of gay people identify as the sex they were born into with the sole difference being that they are sexually attracted to someone of their own sex instead of the socially accepted opposite sex. And that alone is key for so-called “transgenders” are not gay per se but they seem unable to separate “sexuality” from their genetically determined biological sex whether it be because of bad parenting, societal pressures, or political and media driven mixed-messages sent.

And here let's delve into the actual science of why, I believe, “transgenderism” is but a game of not “show and tell,” but of parental induced and societal influenced pretend disillusionment with ones biological sex. And here let's start with some basic science and the fact that DNA itself is the main component...the molecule (as in deoxyribonucleic acid) present inside the chromosomes of each and every cell of all living organisms...cells containing the “genetic information” responsible for the development and function of said organism while allowing this information to be passed from one generation to the next. And what is “genetic information” but the genes...the blueprint...of our bodies, which creates a variety of proteins essential to any organism's survival. Simply, one's DNA and its corresponding “genetic information” work together to make up who we are, and that includes who we are in relation to being either male or female.

Also of brief note, and in layman's terms, is that while chromosomal sex is actually determined at the time of fertilization, and while at six weeks gestation the first signs of sex “differentiation” can be observed in human embryos, the fact is that over the next several weeks hormones are being produced that cause what were “undifferentiated tissue” to transform into either male or female reproductive organs, thus biologically sealing what sex the person will be at birth...what sex their DNA and “genetic information” has determined they will be...and one's genetics gender wise cannot be changed, at least not medically with the knowledge we have today. And if one's DNA and genes cannot be changed, one's biological sex cannot be changed either, leaving any cosmetic manipulation made being but “play acting” or wishful thinking at best.

So where exactly does all that leave us in regards to the misguided concept of “gender reassignment?”

Basically, it first leads us to the fact that gender is not and has never been “fluid” for one's biological gender cannot be changed except in one's own mind which makes the entire “transgender” issue one of someone suffering from a mental illness. And know that those who choose to act out said illness are simply trying to change the reality of who they really are, thus proving that transgender surgery is not the solution for people who suffer from what Dr. Paul R. McHugh, the former psychiatrist-in-chief for Johns Hopkins Hospital and its current Distinguished Service Professor of Psychiatry, calls a “disorder of assumption,” which is simply a person's misguided “belief” that their maleness or femaleness is different than what genetics assigned to them biologically at birth.

And second, this entire what should be a non-issue just adds to the nightmare of what our beloved America has become...a nation where feelings trump science and where reality no longer exists...and it's all courtesy of liberal spewed propaganda being accepted by the blind following masses as truth. And it started with political correctness; morphed into the “it takes a village” nonsense; landed at entitlements in exchange for votes; and now sees an anything goes “woke” society replacing truth, morals, decency, and above all else common sense. And it's all courtesy of the Democrats quest for power where the bottom rung of the ladder will be the economic landing point for all but a specially chosen few.

He's becoming she's and she's becoming he's...where common sense alone should tell you that the recent government spotlight on “transgenderism” is not only politicians condoning and using “play acting” by mentally ill individuals for their own political gain, but that their promoting of a mental disorder must now be added to the list of accepted “woke” topics no longer open to public discussion. Ignoring the fact that “red flags” instead need to be raised regarding both parental inadequacies and a medical community who should not only be ashamed of itself for buying into scientific and medical impossibilities, but who are actually violating their sworn oath to “do no harm” for no one, not even a doctor, should be giving young children sex hormones let alone surgery that mutilates physically who they genetically are.

Simply, what we are now seeing is not only a form of child abuse but true mental illness run amok as innocent children are being stripped of their right to a childhood. And this alone should be a crime in and of itself for by taking away one's childhood you not only change the very essence of who that child might have become, but have created a generation of children whom over time might actually regret both their previous gender confused feelings and the bodily changes that they possibly were forced to undergo by parents who bought into the “transgender” nonsense.

And if the scientific truths I presented are not to your liking, truths proving that “transgenderism” is both medically impossible as well as its being a true mental illness...if you are more Bible oriented instead (which in regards to science fact I am not) I give to you these words from Genesis 1:27: “God created mankind in His image; in the image of God He created them; male and female He created them.” Believe whichever you want, but know as fact that he's cannot become she's, she's cannot become he's, there are not 57+ genders, and that any administration that promotes the butchery of minor children by claiming that “this is a supportive form of healthcare” should be sharing a jail cell with any doctor that performs such sexual “reassignment.” surgeries on said minor children. Either way...case closed.

Posted by Diane Sori at 6:01 AM No comments: