Just a Thought...
Hypocrites All
By: Diane Sori / The Patriot Factor

So the left keeps complaining that President Trump is NOT a uniter but they kept their mouths shut when Obama was dividing us all.
Posted by Diane Sori at 11:19 AM No comments:

The Chairman of the House Judiciary Committee Bob Goodlatte says he has received a “smoking gun” email that shows former President Obama Justice Department blocked conservative groups from receiving settlement payouts, even though liberal groups were given the money.

“It is not every day in congressional investigations that we find a smoking gun,” Rep. Bob Goodlatte, R-Va., said Tuesday. “Here, we have it.”

According to the internal DOJ emails Goodlatte released Tuesday, officials chose which groups received the settlement funds, and even may have intervened to ensure conservative groups didn’t receive money.


While Eric Holder was U.S. attorney general, the Justice Department allowed prosecutors to strike agreements compelling big companies to give money to outside groups not connected to their cases to meet settlement burdens. Republican lawmakers long have decried those payments as a “slush fund” that boosted liberal groups, and the Trump DOJ ended the practice earlier this year. […]

Democrats have been watching, waiting, and hoping that Special Counsel Robert Mueller will bring home the goods and find something so damning that they will be able to throw President Donald Trump out of the White House and into a prison cell. But as we found out this week, the Democrats may wish they had never pursued the Russian collusion investigation with quite this much fury. Because if anyone’s going down, it’s not President Trump – it’s the Democrats.

According to an NBC News report, the Mueller investigation is turning its eye towards the Podesta Group, a lobbying firm run by Tony Podesta, the brother of John Podesta – former Obama White House staffer and former campaign chairman of Hillary Clinton. The Podesta Group is being investigated for their failure to register as a foreign agent when doing lobbying work on behalf of a non-profit called the European Centre for a Modern Ukraine.


The sources said the investigation into Podesta and his company began as more of a fact-finding mission about the ECMU and [Paul] Manafort’s role in the campaign, but has now morphed into a criminal inquiry into whether the firm violated the Foreign Agents Registration Act, known as FARA.

Every last one of the blocks of Trump’s travel bans ignores the statute that gives the President sweeping power to limit immigration: (f) Suspension of entry or imposition of restrictions by President Whenever the President finds that the entry of any aliens or of any class of aliens into the United States would be detrimental […]
Read in browser » 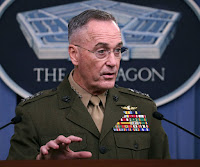 The U.S. commando unit attacked in Niger earlier this month was tracking an Islamic State terrorist recruiter, NBC News reported Tuesday, citing "multiple" U.S. sources.
The officials did not identify the target of the U.S. Army Special Forces detail that was ambushed by about 50 Islamic State militants, the network added. Four American soldiers and five Niger troops were killed in the fight Oct. 4, but specifics of the attack remain unclear.

Marine Gen. Joseph Dunford, chairman of the Joint Chiefs of Staff, in a press conference Monday outlined the known details of what began as a reconnaissance mission.

"I don't have any indication right now to believe or to know that they did anything other than operate within the orders that they were given," Dunford said.
"That's what the investigation's all about. So I think anyone that speculates about what special operations forces did or didn't do is doing exactly that, they're speculating."

NBC added that one official "with direct knowledge of the military's investigation" into the ambush said the Green Berets were gathering information about terrorist suspect and might have been betrayed by villagers sympathetic to Islamic militants linked to al-Qaida and the Islamic State.

About 1,000 American soldiers are in the West African nation to provide support for Niger troops.

The airline is tied to terror activities. And Congress is concerned Boeing’s sales of several Airbus category planes — approved by the former Barack Obama administration — might result in the enabling of Iran’s transfer of terrorists across the region.

The Washington Free Beacon has the story:

The Obama administration’s nuclear agreement with Iran paved the way for U.S. aerospace corporation Boeing to ink a deal with Iran’s state-controlled airline, Iran Air, which was recently caught using its commercial planes to ferry Iranian militants to regional hotspots.

The Trump administration’s recent decision to increase economic pressure on Iran and rework the nuclear agreement has prompted a shift in thinking on the Boeing sales, which require special licenses from the Treasury Department to move forward, according to U.S. officials and those in Congress who are familiar with the shift in thinking on the issue.

The Trump administration is said to be viewing the sales with an increasingly critical eye and is moving, at this point, toward killing the sales, according to these sources, who pointed to concerns over Iran Air’s use of commercial airplanes for terrorism purposes.

Read entire article here: https://pamelageller.com/2017/10/donald-trump-kill-boeing-plane-sale-iran.html/
Posted by Diane Sori at 10:52 AM No comments:

Email ThisBlogThis!Share to TwitterShare to FacebookShare to Pinterest
RIGHT SIDE PATRIOTS...for those who missed last night's broadcast (or just want to listen in again) where Craig and Diane discussed a vile congresswoman's wrongful battle against the president and a 4-star general; organized crime within the Obama regime; and important news of the day....you can listen to it at your convenience on SoundCloud at:
https://soundcloud.com/right-side-patriots-260798913/right-side-patriots-10-17-24