China is unafraid to take digs at the Biden administration, especially regarding foreign policy, as accusations that China is covering up the origins of the coronavirus pandemic put additional strain on its relationship with the U.S.

Gen. Mark Milley, chairman of the Joint Chiefs of Staff, said peace is "fraying at the edge" as the U.S. competes with China and other powers in his commencement address at the Air Force Academy on Wednesday.

"We are now in the 76th year of the great power peace following World War II, and it is under stress," Milley told graduating cadets. The four-star general admitted the U.S. was in "a great power competition with China and Russia." The challenge, he added, has been to stay competitive but avoid a "great power conflict."

Email ThisBlogThis!Share to TwitterShare to FacebookShare to Pinterest
With These Numbers, All Trump Has To Do Is Declare His 2024 Run and the GOP Primaries Are Over
Matt Vespa / Townhall Tipsheet

Before Mitt Romney became a thorn in the side of the Republican Party, he was in a similar position as Donald Trump. After the 2012 election, almost everything Romney predicted would happen under a second Obama term—happened. Russia ran amok, Obamacare was a disaster, premiums rose and hurt the middle class, and job growth was anemic.

Right now, we had gas lines in the eastern United States, anemic jobs growth, China going rogue, Russia running amok again, inflation rising, another war in Gaza, and Joe is out getting chocolate chip ice cream. The ‘I told you so’ narrative is there—and Trump could win it if he chooses. I do believe that—big league. The Trump coalition is durable, passionate, and will mobilize in droves. They’re also one of the deadliest blocs of voters in terms of political geography; they’re very efficiently dispersed throughout the country. Oh, and they hate being polled so you don’t know where they’ll pop up. The only question is if Trump wants to run again. If he does mount a 2024 campaign, the primaries are over as the number of Republicans who want him to run again is sky-high (via The Hill):

Email ThisBlogThis!Share to TwitterShare to FacebookShare to Pinterest
RIGHT SIDE PATRIOTS...LIVE!
Today, Friday, May 28th from 7-8pm EST, RIGHT SIDE PATRIOTS Craig Andresen and Diane Sori present their Special Report: 'Are We Alone?' This is one show you do NOT want to miss!
Hope you can tune in to RIGHT SIDE PATRIOTS on https://rspradio1.com. Click 'LISTEN LIVE' starting at 6:50 pm EST with the show beginning at 7pm EST. 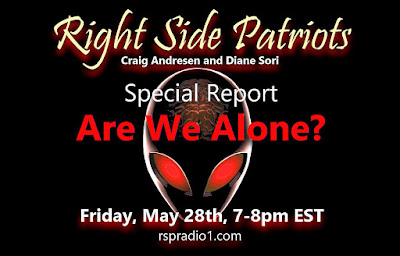