A little less than a month ago, President Obama announced that the United States would seek to normalize relations with Cuba. Since then, Cuba has waffled on releasing prisoners it promised to release, and Cubans are continuing to risk their lives to escape the island and reach the United States. The Coast Guard is reporting a 117 percent increase in Cuban escape attempts since then, including 121 Cubans who were intercepted in the last week alone.

From The Daily Signal:


Even as Washington renews diplomatic ties with Havana, hundreds of Cuban refugees continue to flee the Castro regime for America, braving the 90 miles of perilous open sea in crude homemade vessels.

All were summarily returned to Cuban authorities, as were the 481 refugees intercepted just in the month of December—a 117 percent increase since last year, according to the Coast Guard.

While I empathize with Cubans who long for a better life in the United States, it's curious that even more people are still willing to risk (literally) everything to leave Cuba for the United States despite Obama's attempt to improve relations between nations.

Posted by Diane Sori at 3:12 PM No comments:

More than 100,000 Take to the Streets in Anti-Jihad Demos #defeatjihad #JeSuisCharlie

“Standing in solidarity with Charles Hebdo” is taking a stand against jihad and sharia.

The war on freedom must be fought.

“Thousands gather to show their solidarity with Charlie Hebdo victims in France and Britain as Francois Hollande declares tomorrow a day of mourning,” By Stephanie Linning for MailOnline, 7 January 2015

Thousands also gathered in French cities of Nice and Rennes – and outside French embassy in Berlin.

I don’t see them attached to this Washington Post piece, either. The entire mainstream media is capitulating to jihadist intimidation instead of standing up for the freedom of speech — which freedom, accordingly, is not long for this world.


In its breaking news coverage of the Paris killings at Charlie Hebdo magazine, “Fox & Friends,” the morning show of Fox News, showed a shot of one of the magazine’s controversial cartoons. Yet the network, according to a spokeswoman, has “no plans” to show further examples. Fox News’s decision falls in line with those of other cable news outlets. As reported earlier here and here, CNN has cropped out the provocative drawings from its coverage of the killings. And in an extensive rundown of the news media’s approach to the matter, Rosie Gray and Ellie Hall of BuzzFeed note this policy at the NBC family: “Our NBC News Group Standards team has sent guidance to NBC News, MSNBC, and CNBC not to show headlines or cartoons that could be viewed as insensitive or offensive.”…

Posted by Diane Sori at 3:03 PM No comments:

Email ThisBlogThis!Share to TwitterShare to FacebookShare to Pinterest
NO words needed... 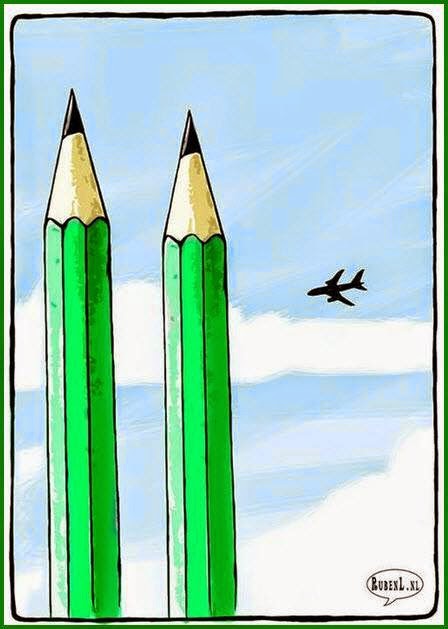 "People had been murdered in a cowardly manner...we are threatened because we are a country of liberty."
French President Hollande appealing for national unity after yesterday's slaughter in Paris

While both al-Qaida and ISIS continue threatening to attack France for its airstrikes against their militant brethren in Iraq and for fighting their equally militant brethren in Africa, and as fears continue to mount in France and all over Europe that jihadis returning from conflicts in Syria and Iraq will stage attacks at home, the French police have now positively identified the three suspects behind yesterday's terrorist attack in Paris that left 12 dead and many injured...four of them critically. 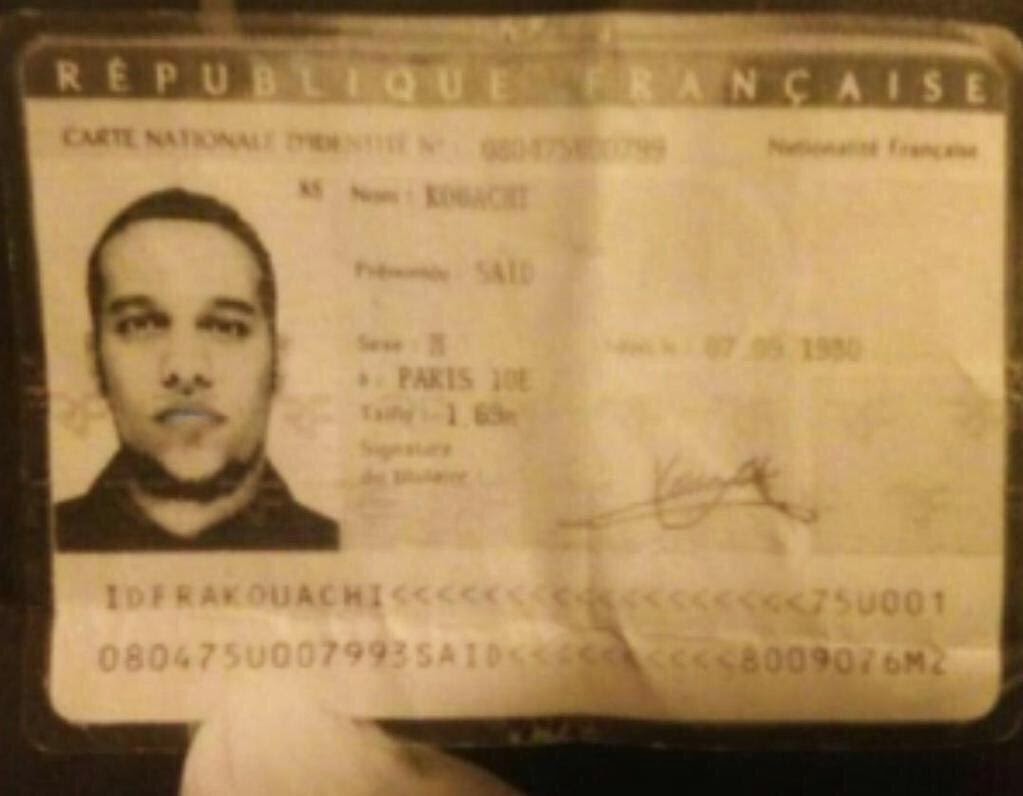 Foolishly leaving behind their ID cards when fleeing the scene in a stolen black Citroen, all three are French citizens of Algerian descent, and one is believed to have ties to an extremist al-Qaeda linked group in Paris that recruits fighters to send to Iraq. Having returned to France late last year after spending time in Syria, two of the suspects have been identified as brothers Said Kouachi, 34 and Sherif Kouachi, 32, with the third suspect being 18-year-old Hamid Mourai, who is believed to be the getaway driver. 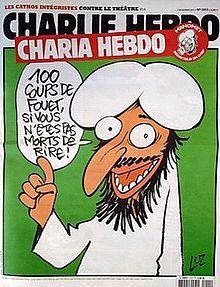 In an attack done as retaliation for a series of cartoons depicting the prophet mohammed in his true anything but prophetic manner that ran in the satirical magazine Charlie Hebdo, the brothers gained entrance to the magazine's offices after forcing a women who was picking up her daughter from daycare in the same building to punch in the code to Hebdo's offices as they pointed a gun to her head.

Once inside the same building that had been firebombed back in November 2011 for their running an innocuous caricature of mohammed, these islamic savages...wearing black hoods to cover their faces in true islamaic cowardly fashion...went from office to office until they found exactly who they were looking for. The methodical and well-planned attack...an assassination actually...lasted but five minutes and took place during the magazine's daily noon editorial meeting...and was carried out military style using Kalashnikov assault rifles all while they shouted the jihadist cry of "allahu akbar."

Murdered in a round of 50 shots were three of the magazine's well-known cartoonists (Jean Cabu, Bernard Verlhac aka Tignous, and George Wolinski), editor Stephane Charbonnier, and French economist Bernard Maris. These bastards then threw in two police officers for good measure...one who begged for his life as he lay wounded on the ground who they then shot execution-style point-blank in the head...and then escaped.

And as I write this unconfirmed reports are coming in that 18-year old Hamid Mourai has surrendered, and that the two brothers...both believed to be heavily armed...are under the French equivalent of an all-points bulletin for their capture and arrest. But know that if this tragedy happened here the anything but Reverend Al Sharpton would claim the police are targeting these 'young men' simply because they are 'brown' and that AG Eric Holder would take the death sentence off the table because those murdered were white.

And as sentiments from world leaders was quick in coming...British Prime Minister David Cameron said, "The murders in Paris are sickening. We stand with the French people in the fight against terror and defending the freedom of the press," while U(seless) N(ations) Secretary General Ban Ki-moon said, "It was a horrendous, unjustifiable and cold-blooded crime. It was also a direct assault on a cornerstone of democracy, on the media and on freedom of expression," but what say Barack HUSSEIN Obama and his de-facto mouthpiece Secretary of State John Kerry.

While Kerry called the victims "martyrs for liberty" NOT getting that martyrs willingly give their lives for a cause NOT have their lives stolen from them by 7th century barbarians with 21st century weapons...Obama condemned what he called the "horrific shooting" and offered to provide any assistance needed "to help bring these terrorists to justice." Yet Obama still refuses...willfully refuses...to call these savages what they truly are...ISLAMIC terrorists...get that Obama...ISLAMIC...as in your muslim brethren...ISLAMIC...as in demons spewed from the bowels of hell who relish in washing their hands in the blood of we so-called infidels...who revel in cutting off our heads and posting them on poles for the world to see.

And what of Europe whose governments allowed their countries to be invaded and poisoned by wave after wave of immigrating muslim barbarians who have NO place living or existing amongst civilized men...they...and we here in America as well...need to understand that we together as members of the civilized western world are indeed all at war with islam. The time of placating, appeasing, and cuddling the enemy...an enemy driven forward by the islamic doctrine of hate for anyone NOT bowing to their 7th century ways...must now come to an end and that a war must be fought on the premise of eradicating the enemy...YES totally eradicating the enemy. And a fact that must be understood by all is that islam's true goal is to kill us all and that has been their goal ever since a delusional madman invented a false god he came to call allah way back in 632AD.

In plain terms...islam is the enemy...NOT the media created politically correct illusion that has come to be called 'radical islam'...but all of islam...for there is NO difference between the two...NEVER was and NEVER will be.

So as France raises its security level to high and steps-up protective measures at houses of worship, stores, offices, and on public transportation, along with schools being closed, thousands of people continue to crowd Republique Square near the site of the killing to honor the victims by waving signs saying "Je suis Charlie"..."I am Charlie." And ground zero of all the muslim perceived mohmmed bashing, Danish newspaper Jyllands-Posten, which published the first cartoons of mohammed back in 2005 sparking riots in many muslim countries, has now stepped-up their own security in the wake of the Charlie Hebdo attack as they know they will most likely be next for they are NOT foolish enough to think that this attack in Paris will be the end...NO... yesterday's attack was just the beginning of very dangerous times ahead.

Be afraid my fellow American infidels...be very afraid...for the world's great oceans can NO longer insulate and separate us from the happenings in Europe. And to that I say,“I am Charlie” and I hope you are too.
Posted by Diane Sori at 12:01 AM 24 comments: