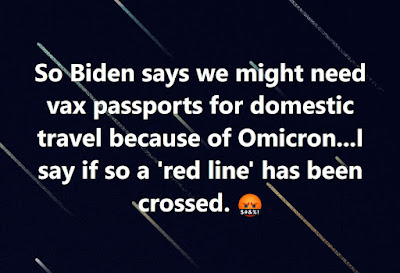 The CR passed the House earlier in the evening 221-212, with Rep. Adam Kinzinger (IL) being the only Republican to vote with Democrats. Some Republicans, like Rep. Chip Roy (TX), wanted to tie funding the government to President Joe Biden's vaccine mandate.

Its fate was less certain in the Senate, though, again, due to vaccine mandates. An agreement was reached, though, when the Senate agreed to vote on an amendment from Sens. Mike Lee (R-UT) and Roger Marshall (R-KS) to defund Biden's vaccine mandate and testing requirements, with only a simple majority. Read more and see tweets and video here.

Israel’s prime minister has urged world powers to immediately end nuclear talks with Iran, after it decided to start using advanced machines to enrich uranium at an underground plant.

Naftali Bennett warned the US that Iran was “carrying out ‘nuclear blackmail’ as a negotiation tactic”.

They are trying to save a 2015 deal that curbed Iran’s nuclear programme in return for the lifting of sanctions. It has been close to collapse since then-US President Donald Trump pulled out and reinstated sanctions three years ago.

Iran responded by violating key commitments. Many of them are related to the production of enriched uranium, which is widely used as fuel for nuclear power plants but can also be used in nuclear weapons.

President Joe Biden has said the US will rejoin the agreement and lift its sanctions if Iran returns to compliance. But his Iranian counterpart, Ebrahim Raisi, has insisted the US…Read more and see video here.