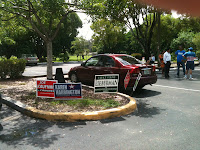 OK guys to put it bluntly...the sh*t is starting early.  I just got back from doing some ground work at one of our local voting places here in my South Florida hometown, as this week is early voting for both the Republican and Democratic primaries for Senator, Congress people, judges, school board members, and on the Democratic side sheriff also.

After I set-up the ‘KAREN HARRINGTON FOR CONGRESS’ signs I went in to vote before doing hand-outs.  And so it began.  First, the machine that gives you your ballot was NOT working properly so I asked for my ballot to come from another machine and guess what I was told...you guessed it, NO!  They said I had to wait until they fixed it and of course I said, ‘WTF...the usurping starts early!’ to which the gentleman in charge there said how dare I say such a thing, there’s NO usurping going on nor has there ever been usurping.  You can just imagine my reply to that one!

And you can also imagine my words of choice when it became apparent that all the poll workers seemed to be Democrats NOT a Republican in the bunch to my knowledge!  FYI, our SOE is a die-hard Democrat so that comes as NO surprise.

But let me go back a bit and tell everyone that NOT all states are using or will be using the easy to usurp electronic voting.  Here in Florida we have to bubble in our choice, which thankfully will make usurping a bit harder and we MUST show a picture ID where the name and address matches our voter registration information BEFORE we are handed a ballot.  Thank you Governor Scott.

Anyway, I finally got a proper ballot and did my bubbling then went to put my ballot in the tabulation machine and guess what, that machine spit my ballot back out.  Another WTF moment as the guy in charge of the machine had the audacity to ask me do I speak English since I obviously didn’t understand his instructions.  Well, you can just imagine my response to that one and it wasn’t pretty!

Two machines NOT properly working in the heart of DWS territory...how convenient to say the least.  Finally, the machine accepted my vote and off I went to do hand-outs.  But first I need to tell you that in Florida you cannot campaign within 100 feet of the polling place nor can you place campaign signs within the same 100 feet.  I tell you this because the man in charge of the polling place did NOT let me give out KAREN’S handouts in the parking lot but let those handing out DWS’s do so as well as let one of KAREN’S opponents do so (more on that later).  When I saw this I of course went over and made a BIG stink about this and finally they walked behind the 100 foot mark and stayed there for as long as I was there but who knows what happened after I left.   BTW, this same man in charge, obviously a Democrat of the first degree, even made me take off my KAREN FOR CONGRESS magnetizing sign on my car door threatening that if I didn’t they would call the police!  They also threatened me with police action if I took any photos within the 100 foot perimeter.

Also quite odd that one of the DNC area heads was there pushing DWS, and of course Obama, when DWS had NO Democratic opponent at all.  And even more surprising but NOT unexpected, was that one of KAREN’S opponents (the same one alluded to in my above statement about the handouts) whose people were there doing what I was doing, which of course is their right, were all clustered together buddy-buddy like with the Democrat campaigners and the DNC person.  We always suspected that this person was a Democrat plant now this is just a bit more evidence that what we suspected all along is indeed correct.

As you all can guess it’s hot here in South Florida in the summer, especially at mid-day standing out in the sun.  I wanted to go sit a bit to cool off under the big trees in the parking lot or by the library (which is the polling place) itself, but because said trees are within 100 feet of the polling place and I was wearing a KAREN shirt the man in charge would NOT let me.  He said I could go beyond the 100 foot radius if I wanted to (where all the Dems were standing saying all sorts of crap about Republicans) but guess what...there are NO trees of substance back there to cool off under as the trees that are back there are on another piece of property behind a fence.  And again I got threatened with police action for trying to take pictures as proof of what I’m saying.

Having had heat stroke before I could no longer stay in the hot sun so I had to come home but I will go back later to pick up the signs and check on those who could take the heat.  But the bottom line in all this is that we MUST keep our eyes open to even the most minute of questionable activity and that as citizens we have the right to call the police if we see any funny business going on.  We also have the right to report to our Supervisor of Elections anyone working the polling places who is disrespectful, threatening, or NOT remaining impartial toward the voters.

And you know Monday morning I will be doing just that.
Posted by Diane Sori at 2:48 PM 12 comments: