As the media continues to pimp for ISIS, Hamas, Hezb’Allah and the rest of the primitives.

Jihadists respond to the enemedia’s submission with the same message they had for Daniel Pearl after 9/11/01.

Jihadists have sawed off the head of US journalist James Wright Foley as “message to America.

Foley was a TIME Magazine contributor — will they continue to shill for jihadists?

But no worries, because the commandant in chief tells us they are “on the run” and just a bunch of “Junior Varsity” players.

This is the same media that either ignored or mocked our anti-ISIS rally on Sunday.


His executioner speaks with what appears to be a British accent, saying many Muslims worldwide accepted IS and a war against IS is, in essence, a war against Muslims. The UK has been one of the Islamic State’s most active targets of recruitment.

After he beheads Foley, he presents to the camera another journalist, Steven Joel Soltoff, who worked for Time and The National Interest. Soltoff was reported missing in the middle of last year. The executioner said America’s next move will determine IS’s next move in what appears to be a threat against the second journalist. (Breitbart) 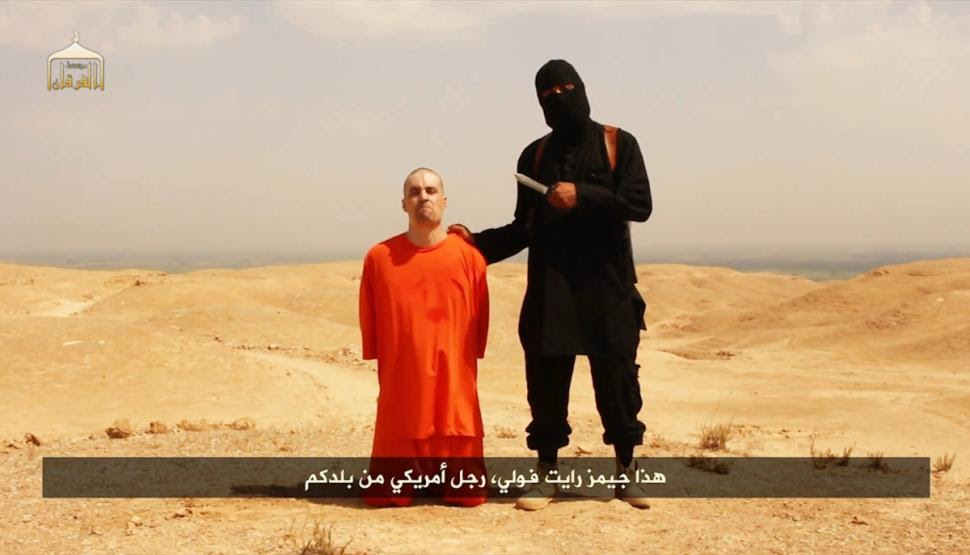 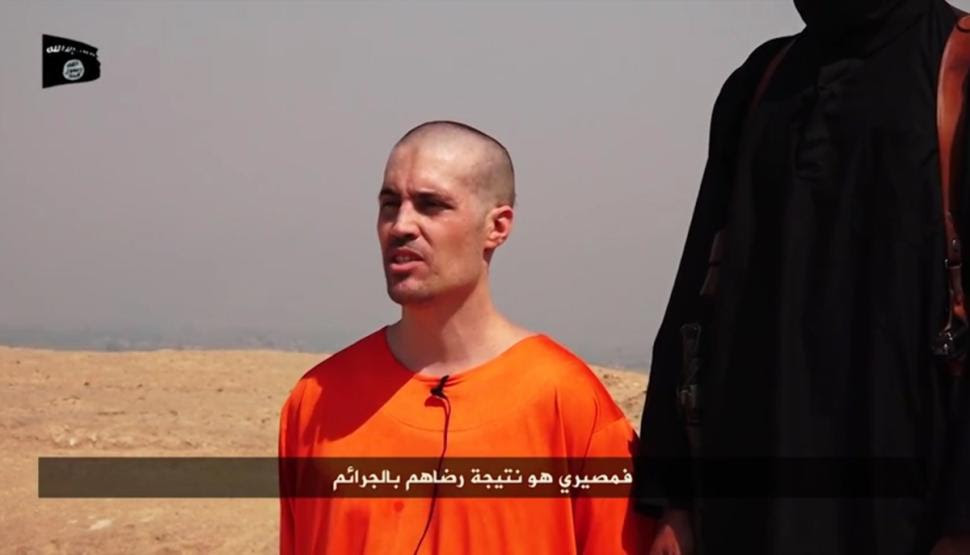 WARNING: GRAPHIC IMAGES. A masked militant claims the murder is in retaliation for American airstrikes against the Islamic State militants in Iraq. Missing since Nov. 22, 2012, Foley...

Mission creep is slowly escalating President Barack Obama’s new war on Iraq, as it always does in these cases.

What ostensibly started out as a “humanitarian” mission to rescue people trapped on an Iraqi mountain is morphing into a search and destroy mission. Much to the delight of the military-industrial complex, American fighter jets and drones are now patrolling the skies and blowing up billions of dollars of what was formerly American weapons and materiel abandoned by the Iraqi army as it fled the ISIS hoard.

But Obama’s bombing the wrong targets. If he wants to stop the ISIS threat with bombs, he needs to bomb the source.

ISIS is/was funded by putative U.S. allies Saudi Arabia (the same country that spawned 15 of the 9/11 hijackers and funded the attacks), Qatar, Kuwait and the United Arab Emirates.

The terror group rose from the ashes of Libya following the overthrow — with U.S. assistance and arms — of Libyan strongman Moammar Gadhafi. ISIS grew in the Syrian civil war, again with U.S. arms, assistance and training. It is, by the way, the same group of people that John McCain and his neocon toadies wanted to overtly assist — as opposed to the covert assistance provided by the regime — in its efforts to overthrow the Syrian government.

If he truly wants to stop ISIS, Obama needs to start bombing Saudi Arabia, Qatar, Kuwait, the UAE and, most especially, Washington, D.C. Of course, we know he doesn’t.
Posted by Diane Sori at 11:58 AM No comments:

I intended to write an article today about the mess in Ferguson Missouri but let’s be honest here…brutally honest…I don’t know what happened when that punk kid got shot by the cop and neither do those who are rioting, looting, committing arson, shooting or going on the attack.

NOBODY really knows what went down in that moment nor will they until the investigation is complete and when that is done, if charges are warranted, so be it. A trial will follow, a verdict will be rendered and whatever happens next will happen…but I guarantee you this…if there is no trial or the cop is found not guilty IN a trial…there WILL be more of what we’ve seen in Ferguson over the past 12 days and nights.

There are good people in Ferguson…plenty of them from both sides of the political aisle and of all colors of skin but what we’re seeing there now is a direct result of idiots and fools.

Today from 2 to 4pm EST will be a special edition of RIGHT SIDE PATRIOTS on CPR Worldwide Media http://cprworldwidemedia.com/live-radio/ Craig and Diane will go 'ALL IN' regarding the situation in Ferguson…NO HOLDS BARRED…telling the truth NOBODY else in the media has the GUTS to tell you! They will also report on the beheading of reporter James Foley and say things few dare to say.

If you want to hear the TRUTH and NOTHING BUT…DON’T MISS THIS SHOW!!!
http://cprworldwidemedia.com/live-radio/
And chat with us LIVE during the show at:
https://www.facebook.com/groups/cprworldwidemedia/

Email ThisBlogThis!Share to TwitterShare to FacebookShare to Pinterest
Op-ed:
Divert, Deflect, and Deceive
By: Diane Sori

On July 8th, Israel sent ground forces into Gaza and we were mesmerized by the IDF in action as they destroyed tunnel after tunnel stopping an underground Hamas infiltration of their land.


On July 9th, using the developments in Israel as a means to divert and deflect our attention away from an important Senate appointment vote, San Antonio Mayor Julian Castro...an Obama nominee with most decidedly communist leanings... became the new Housing and Urban Development (HUD) Secretary.

In a vote of 71-26...with 18 (turncoat) Republicans voting in favor of this nomination...the man whose mother was one of the founders of the ubber militant Hispanic political group 'La Raza Unida' (The Race United)...an anti-white group whose goal was to create a separate 'brown' Hispanic/Chicano only country (Aztlan) within America's Southwest...that man has now stepped onto the national stage much like Barack HUSSEIN Obama did back in 2007.

And even before the glow of his ceremonial swearing-in had a chance to wear off...a swearing-in on July 28th (officiated over by VP Joe Biden) that was so hush-hush that few of us even had an inkling that it had happened... Castro...who hasn't even had time to do one thing of substance in his new HUD position...suddenly has been outed as Hillary 'What Does It Matter' Clinton's most probable running mate in 2016. Hoping to use this pairing as a way to build upon Obama's electoral base of 2008, and put some red states into play for the Democrats, Castro suddenly has become the media's new darling de-jour.

Remember their names for in this vote they have willingly allowed what I believe to be a true anti-American radical into the cabinet...an anti-American radical who turned San Antonio into a 'sanctuary city' (meaning the police are NOT allowed to cooperate with federal immigration authorities)...a man who considers restricting or halting ILLEGAL immigration...with ILLEGAL being the key word...to be both anti-immigrant and anti-Hispanic...a man who pushed through a divisive resolution that opposed Arizona’s immigration law...and a man who calls the implementation of any and all voter I.D. laws “voter suppression.” This is the man 18 Republicans cast a 'yea' vote for.

Remember their names come their re-election time for they knew damn well Castro's leftist leanings and yet they voted to approve his nomination. And they knew damn well that he was going to use this appointment as a stepping stone to now carry on Obama's tradition of doing all things against America, and tomorrow using this appointment to pave the way for higher office. And these 18 Republicans knew this because the simple fact is that any appointment to HUD gives that person their chance to forge a presence in D.C...to make a name for themselves... and allows them to build relationships with officials across the country. 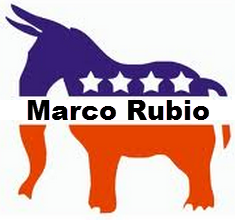 And I will sadly now have to take my own words to heart and call out a man who I supported and who I volunteered for because his name is on that very list. Senator Marco Rubio, a still possible presidential nominee in 2016 and the once shining star of the Republican Party, it seems has now deserted the party of Lincoln and Reagan in favor of political expediency...as in pandering to his fellow Hispanics for their votes...making him...dare I say it...a RINO.

Oh Marco...how far from grace you've fallen...first it was amnesty and now this. We once had such high hopes for you and now in the blink of an eye...and in a vote for a communist in Democratic clothing...it's all gone. The knowingly risky amnesty stance you took I can forgive you for because if NOT for you throwing a wrench into the McCain/Graham bill there would now be a free-for-all...'legally of sorts'...blanket amnesty bill in effect that would have granted amnesty to over 11 million ILLEGALS ...but voting for a radical...a known communist-leaner and anarchist of sorts...that is simply inexcusable...period.

So now it seems we truly have RINOS in front of us and RINOS behind us as well, but if truth be told even a RINO is better than a liberal Democrat as November's elections must remain about numbers and numbers alone.

So as these mid-terms fast approach I just wonder what diversions the Obama White House has planned for us next. Remember, news of the impending Castro confirmation vote was cleverly and calculatingly buried by the media blitz about Israel sending troops into Gaza. Becoming a vote snuck in under our radar so to speak...this skewed media blitz became an Obama/Jarrett orchestrated pro-Palestinian, pro-Hamas love-fest if ever there was one as the 'alphabets' tried and tried again to paint Israel as the aggressor...to paint Netanyahu as the devil incarnate.

And all this was done to deceive us...to take our focus off all things domestic... domestic in this case being an appointment that could very well be the stepping stone for a communist-leaning Hispanic to team up with a socialist-leaning woman whose husband is drooling to once again become an occupant of 1600 Pennsylvania Avenue.

And the screwing of 'We the People' continues and this time 18 Republicans had a hand in it.

Today from 2 to 4pm EST will be a special edition of RIGHT SIDE PATRIOTS on CPR Worldwide Media http://cprworldwidemedia.com/live-radio/
.Craig and Diane will go 'ALL IN' regarding the situation in Ferguson…NO HOLDS BARRED…telling the truth NOBODY else in the media has the GUTS to tell you! They will also report on the beheading of reporter James Foley and say things few dare to say.

If you want to hear the TRUTH and NOTHING BUT…DON’T MISS THIS SHOW!!!
http://cprworldwidemedia.com/live-radio/

And chat with us LIVE during the show at:
https://www.facebook.com/groups/cprworldwidemedia/
Posted by Diane Sori at 12:00 AM 2 comments: