Tomorrow, Wednesday, February 3rd from 2 to 4pm EST, RIGHT SIDE PATRIOTS Craig Andresen and Diane Sori will discuss the latest on Hillary and her emails, Obama Visits a Mosque...How Special is That, and Recapping the Hawkeye Cauci. 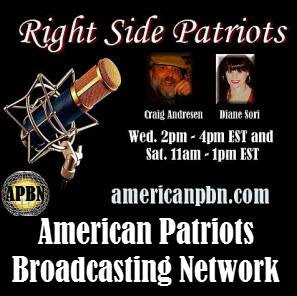 Posted by Diane Sori at 9:50 PM No comments:


Op-ed:
Obama Visits a Mosque...Now Isn't That Special
By: Diane Sori / The Patriot Factor / Right Side Patriots on www.americanpbn.com

“Islam is the most retrograde force in the world.”
- Sir Winston Churchill

So it seems that finally the ire of a major player on the international stage is showing, and it's showing in regards to the actions of a certain group of terrorists. And while his concern is too little and way too late, the fact remains that U(seless) N(ations) Secretary-General Ban Ki-moon is now saying that he is "alarmed" by recent statements from Hamas' leadership in Gaza that their intention is to continue building tunnels...to continue building its network of underground passages...under Israel's heavily fortified and gun-turreted walls as well as to continue lobbing rockets into Israel.

So with Hamas' announced goal of building more tunnels no matter the walls in place, it should become obvious even to those whose battle cry is 'wall' that no wall will stop anyone who is truly intent on getting into a country...therefore common sense dictates that a wall will not stop the problem of illegals crossing onto American soil either. Remember, if Israel can't keep terrorists out with their heavily fortified wall, the only thing a wall will do for us is slow the flow of those wanting in down a bit...and that includes islamist terrorists...for walls are just window dressing...used to lure us into a false sense of security as Ban Ki-moon's statement proves. 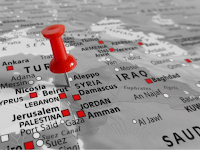 And in Ban Ki-moon's adding that, "Such statements and actions put at risk reconstruction, humanitarian and development efforts by the international community and Palestinian and Israeli authorities," and that "They also do a serious disservice to the long-suffering people of Gaza," what Ban Ki-moon chooses to forget is the suffering of the Israeli people who must live under the constant almost daily threat of not knowing exactly when and where the next rocket attack will occur, but also the psychological damage done to the psyche of the innocents as they are forced to live under the anything but ideal condition of constant fear. And know that I do not mean the so-called Palestinians whose hierarchy takes for themselves the aid and monies given not to help their people but to buy weapons to continue the vicious and continuously ongoing cycle of hate and violence against the good people of Israel...a people who just want to live in peace on their tiny sliver land surrounded by those who wish to wipe them from the face of the map.

So while Ban Ki-moon and his ilk ignore the fact that Israel is facing the real possibility of extermination...we also have a serious problem right here in our own country as we have a president who is not only the 'enemy within' but who is also a man trying to rewrite our nation's history...rewrite it to such a degree that our children and grandchildren might never know the true nature of both the enemy we face and the true history of those out to disparage our beloved United States.

How so you may ask...it's really quite simple. The fact is that we are facing an enemy whom this president dare not admit is an enemy for by him doing so he also admits that he too is our enemy, and that is something Barack HUSSEIN Obama will never do. And with that being said, just this past weekend it was announced that Obama will visit the Islamic Society of Baltimore this upcoming Wednesday, with the purpose of the trip being, as per an official White House press release, to “celebrate the contributions Muslim-Americans make to our nation and reaffirm the importance of religious freedom to our way of life.” But for the life of me the only contributions I see muslin-Americans have made to our way of life are their continuing to destroy the very fabric of our American society by demanding we set our nation's clock back 1600 years and that sharia become the law of our land...and the Constitution be damned.

And so the man who during his presidency has never once visited a Christian church...a church of his 'supposedly' claimed faith...the man who has done every and anything to appease islam...has suddenly now decided to visit a mosque and out of the 2100+ mosques here in this country...out of the 23 mosques in the D.C. and the surrounding area...this miserable excuse of a president picks the Islamic Society of Baltimore mosque to visit...the farthest away of those 23 mosques...a mosque that claims “to be the anchor of a growing Muslim community with diverse backgrounds, democratically governed, relating to one another with inclusiveness and tolerance, and interacting with neighbors in an Islamic exemplary manner” yet a mosque, with its adjoining school, that is well-known to be controlled by the Hamas-linked Islamic Society of North America (ISNA).

And the ISNA is the very group designated in 2004 by the Treasury Department as a terrorist organization. And lest we forget that the ISNA just happens to be one of the unindicted co-conspirators in the 2008 Holy Land Foundation terror case as well as a group who had several of its executives convicted of sending large sums of money to also designated terrorist group Hamas...nice huh. And this mosque's imam, Mohammad Adam el-Sheikh, was and most likely still is a Muslim Brotherhood member...and it was the Muslim Brotherhood that gave birth to Hamas...making this a mosque with deep and continuing ties to radical extremism including having direct ties to al-Qaeda and other terrorist groups as well...and this is the very mosque Obama decided to visit. 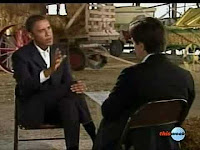 Of course he did as Barack HUSSEIN Obama is indeed a muslim...you can watch him admit it here:
https://www.youtube.com/watch?v=bMUgNg7a...In fact he's an islamist of the first degree...just a behind the scenes one hiding behind the power of the presidency instead of actually wielding a bloody knife himself.

So why is Obama visiting a mosque now at the start of primary season...it seems muslims here in the U.S. have pleaded...begged actually...for him to visit a mosque to show how 'wonderful' and 'peaceful' they are because of the (rightfully) rising hostility towards muslims in general that continues to grow. By visiting a mosque and trying to claim that muslims have always been an integral part of American history...that muslims have always contributed positively to American society...Obama hopes he will be able to counter the three leading Republican candidate's calls for either deportation, surveillance of mosques, and/or registering muslims currently living here and stopping others from entering...all good things I say...as he ignores the fact that a full two-thirds of Republican voters and nearly half of all American voters favor a temporary ban on muslim immigration to the U.S., and that nearly half of GOP voters in Iowa believe that islam shouldn’t even be legal within the U.S.

And so a visit to a radical mosque fits Obama's agenda well as when there he will spew out lie after lie about muslim contributions to America. Well let me tell you the truth about some muslim contributions to America... contributions like the recent police shooting in Philadelphia, the slaughters in San Bernadino and Ft. Hood; the Boston Marathon, USS Cole, and the first World Trade Center bombings; the First Barbary War...the first war our country fought against islamic jihadists where President Thomas Jefferson refused to acquiesce to the Barbary states’ demands for tribute payments; and the mother of all contributions muslims gave to America...a contribution forever known as September 11, 2001...the day our beloved America changed forever.

Will these be the contributions Obama will talk about...I seriously doubt it. Will he even mention that the 10,000+ muslims he now wants to bring into our country are coming from the very countries in which if you dare to denounce let alone question the (anything but) 'prophet' that you'll find your head quickly removed from your body. Will he mention the fact that this ingrained mindset will come here with them as well...that these people are a danger to our national security...again I seriously doubt it.

And let's add a few more bits of happiness to the list of muslim contributions to America...contributions like the TSA with its increased and often degrading airport body checks where we Americans are treated as if we are the criminals in the left's politically correct attempt to avoid calling out the true problem, as in muslims; contributions like a weakened economy because of all the monies spent on Obama's losing the peace after George W. Bush had won the wars; and his trying to install Muslim Brotherhood controlled governments in Egypt and other countries...actually Obama's helping with the caliphate building; and a contribution few will talk about...that being that muslims set in motion the chain of events that led to today's ongoing racial tensions in regards to slavery as the first slave traders to sell and introduce slaves to America were muslims and muslims alone...muslims who were operating in accordance with the sanction of slavery given by mohammed and the qur’an. So oh yeah...muslims have indeed contributed much to America...all bad I would say. 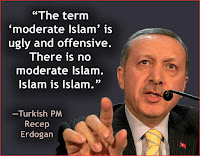 And while some will say what about muslim doctors for example, to that I will say I would never go to muslim doctor...I could never trust them with my infidel life...would you. And Obama's saying that "muslim-Americans are our friends, and neighbors; our co-workers, and sports heroes – and our men and women in uniform defending our country,” is quite simply reality in his mind alone for in this day of 'islamic terrorism'...the very two words he still will not say...and with the silence of the 'so-called' moderate muslims whose silence speaks of condoning not condemning radical islam...I stand by these words of mine...“muslims have contributed nothing of value to the fabric of our American society...nothing except pain, grief, and a general sense of unease that hovers always as to what will they do next.”

So as our muslim-in-chief visits a mosque to try and bamboozle us into thinking what fine people his brethren are, just this past weekend his brethren in ISIS aligned Boko Haram in Nigeria massacred people in the village of Dalori, burning to the ground their homes while people were trapped screaming in agony inside. Yeah tell me again about muslims Obama, and while you're telling me don't forget to tell Ban Ki-moon as well.
Posted by Diane Sori at 12:01 AM 7 comments: