For those who missed today's show here it is...and as always we stand by every word we said.

Tune in at: americanpbn.com
Posted by Diane Sori at 2:11 AM No comments:

“Mitt Romney is a stiff...He got killed, he got decimated in the election.”
- Donald Trump on Mitt Romney's pre-debate speech

I will say upfront that I always have liked Mitt Romney. I liked him when he was running for the nomination in 2008 and I liked him as the nominee in 2012...so much so that I volunteered on his campaign believing then as well as now that he would have made one terrific president. And I was angry when he lost to Obama in 2012 by two to three million votes, but my anger was not at Romney for losing but was at the two to three million Evangelicals who would not vote for him just because he is a Mormon...not their particular brand of Christian tea it seems. And guess what, I am still angry at them for not only their not voting...which is the direct cause of the Obama nightmares we face today...but because they are posed to do it again by supporting of all candidates, Donald Trump, the antithesis of all things they claim they embrace...as in God, the Bible, family, and country.

And now their voices continue to be some of the loudest against Mitt Romney's words, this time for the speech he gave at the University of Utah in Salt Lake City in the hours before Thursday's presidential debate...a speech which in my opinion rightfully set the tone for said debate. And set the tone Romney did by exposing Donald Trump as the true threat for “a safe and prosperous future for all Americans.” Saying, "Dishonesty is Trump's hallmark," Romney also claimed that Trump is playing the American people for “suckers”...which I too believe Trump is doing with his loud but lacking in substance bloviations that feed into the misdirected anger many Americans are feeling today.

And playing the American people for suckers is just a part of what Romney spoke about as he added the truths about Trump's proposed tariffs touching off a trade war and killing export jobs; about Trump's tax plan ballooning the deficit and national debt; and about Trump's overall plans being very bad for American workers and for American families. And Romney also spoke truths about Trump's recent mocking of a disabled reporter; of his attributing a reporter's questions to her menstrual cycle; of his disparaging words about Carly Fiorina's appearance; of his bravado about his many marital affairs; and of Trump's continuing vulgar-laced and bullying public rally speeches.

Summing it up by saying that Trump's “...domestic policies would lead to recession,” that “His foreign policies would make America and the world less safe.” and that “He has neither the temperament nor the judgment to be president,” Romney in no uncertain terms nailed it by painting Donald Trump for what he truly is...a Democrat dressed in thousand dollar 'Made in China' suits trying to pass himself off as a Conservative...and the angry are buying into it no matter that their anger is buying into nothing but lies and excuses.

Especially excuses for his lies.

And at Thursday night's debate presidential candidates Marco Rubio and Ted Cruz together hit that point home... catching Donald Trump like one captures a deer in the headlights on not just one front but on many, a few of which I'll focus on here.

And one case in point is that the man who claims that he will bring jobs back to America actually in his own business dealings does anything but. "When you have chances to help the American workers you're making your clothes overseas and you're hiring your workers from overseas,” were Marco Rubio's words when speaking that Trump's clothing line...The Donald J. Trump Signature Collection...is being made in of all places, China....the very country Trump continuously rails against. And the fact is that Trump does indeed employ Chinese workers to make his clothing line at wages far below what he would have to pay workers here in America...basically bypassing the American worker in favor of making more profit for his Trump empire by his outsourcing jobs overseas. 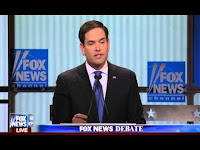 And Rubio's saying that, “You [Trump] argue that you’re here to fight for the American worker, but when you have a chance to fight for the American worker, you’re hiring workers from overseas and you’re making your clothes overseas,” had Trump retorting with the excuse that countries like China devalue their currencies (a deliberate downward adjustment to the value of a country's currency, relative to another's currency, making imports more expensive while protecting domestic industries who may then become less efficient without the pressure of competition) saying, "I will do that. And, by the way, I have been doing it more and more.”

Adding that, “They devalue their currencies and they make it impossible for clothing makers in this country to do clothing in this country...if you look at what's happened on Seventh Avenue and you look at what's happened in New York with the garment industry, so much of the clothing comes out from Vietnam, China and other places. It's all because of devaluation," words spoken by Trump that did nothing but make excuses for why he did not hire American workers. And Trump hoped that the public did not hear the truth in Rubio words that, "The answer is he is not going to do it...And you know why?...The reason he makes it in China or Mexico is because he can make more money on it," but hopefully many viewers did.

And Trumps response, "This little guy has lied so much about my record. He has lied so much about my record." But I ask what record as Donald Trump has done nothing but pad his own bank account by building luxury condos, hotels, casinos, and golf courses that middle-class Americans...the very ones he is pandering to...could never afford. And Rubio rightfully accused Trump of being incapable of having a substantive policy debate saying, "You see what happens again when you challenge him on a policy issue?...the first thing he does is launch an attack on some little guy thing."

And so Marco Rubio...whose campaign clothing sells on his official website and is 100% 'Made in America'...showed Donald Trump to be first and foremost a teller of tall tales as to the jobs he'll create, and that his bottom line is and will always remain the almighty dollar...the very hallmark of a true politician something Trump still claims he is not. But if truth be told Donald Trump is the most consummate of politicians...and who like King Midas will have his supposed 'golden touch' and his all consuming greed being his downfall in the end.

And that point was also driven home by Ted Cruz who reminded people that Donald Trump gave none other than Hillary Clinton four large checks supporting her 2008 presidential campaign. Saying that Trump supporters desire for a political outsider to lead the country was misplaced...and it surely is...Cruz said that, “For 40 years, Donald has been part of the corruption in Washington that you’re angry about...And you’re not going to stop the corruption in Washington by supporting someone who has supported liberal Democrats for four decades, from Jimmy Carter to John Kerry to Hillary Clinton,” also adding the infamous Harry Reid and Nancy Pelosi to that list as he asked Donald Trump to explain these contributions after being rudely interrupted time and again by Trump as he tried to speak.

And Trump's excuse...“Actually, it was for business,” adding that he also gave monies to Ronald Reagan and George W. Bush during their time. But the truth is that no true conservative...no true Republican...would ever give monies to those named, save of course for Reagan and Bush, unless they expected something in return...as in a favor...a political favor now coming due. And for the man who is all about deals, what really is a political favor but an expeditious self-serving political deal.

Trump's rudely interrupting Cruz's air time led Cruz to say “Count to 10, Donald, count to 10,” as Trump was obviously in meltdown mode for how dare the two junior senators tag-team against his royal Trumpness. And when Cruz talked about the qualifications needed for the next Supreme Court justice, Trump looked like he was ready to explode. Saying, “Breathe, breathe, breathe...you can do it.” Rubio then jumped in to joke that his two rivals were primed for yoga. "When they're done with the yoga, can I answer a question?"

"You cannot. I really hope that we don't see yoga on that stage," Cruz smiled and said with Rubio tag-teaming with this joke about Trump: "Well he's very flexible, so you never know," a jab directed at Trump’s constant flip-flopping on the issues...issues being something Trump refuses to discuss during the debates...or anywhere else for that matter...instead throwing out 'soundbites' for the media to spoon-feed the frenzy of the misinformed masses.

And together both Rubio and Cruz demanded that Trump release the full transcript of his recent meeting with The New York Times editorial board, after it came out that Trump, in off-the-record remarks, told the board that he was willing to soften his hard-line immigration stance...after immigration and his hard-line stance was what set in motion the Trump push for the presidency. And Trump's excuse for what he said was, I would “never release off-the-record conversations...I’ve given my answer, lying Ted. I’ve given my answer,” completely ignoring the fact that his inflammatory and vile rhetoric spewed out on immigration might very well halt efforts by the Republican party to reach out to Hispanics and other minorities...and I do not mean the muslim minority for on that I happen to agree with Trump simply because of the art of taqiyya.

Also, Trump's words...his lies...said to both Marco Rubio ("little Marco") and to Ted Cruz ("lying Ted")...comprise the entirety of the Trump campaign...a campaign based upon name calling, mockery, and issues dodging...a campaign headed by the man who actually had the gall to say on camera about our military that, “If I say do it they'll do it” (in reference to killing innocent members of terrorist families)...still doesn't get that America is not a dictatorship nor will it ever be...period.

And so we come full circle back to Mitt Romney's remarks said earlier on debate day, words that sum up Donald Trump best, “Here's what I know: Donald Trump is a phony, a fraud. His promises are as worthless as a degree from Trump University. He's playing members of the American public for suckers: He gets a free ride to the White House, and all we get is a lousy hat."

Tune in at: americanpbn.com
Posted by Diane Sori at 12:00 AM No comments: