House Republicans passed legislation Wednesday that would give Congress the power to overturn dozens of recently enacted regulations with a single vote.

The Obama administration rammed through $44 billion worth of regulations since Donald Trump was elected in November—but this legislation would put an end to ‘midnight rules,’ or those rolled out in the last 60 legislative days of an outgoing administration.

"Because outgoing administrations are no longer accountable to the voters, they are much more prone to issue midnight regulations that fly in the face of the electoral mandate the voters just gave the new, incoming administration," said House Judiciary Committee Chairman Bob Goodlatte ahead of the vote. "Waves of midnight rules can also be very hard for Congress or a new administration to check adequately."


The bill specifically amends the Congressional Review Act to permit Congress to retrieve the ability to effectively curb numerous regulations crammed through the regulatory process in the last days of an outgoing administration all at once. The legislation is designed to stifle a growing trend by presidents to use their final few months in office to hurry through costly, expensive or controversial new regulations.

“This is about accountability, transparency and ensuring job creators aren’t being crushed by droves of new regulations just before a President leaves office. Regulations, when necessary, should be implemented with time for a thorough public vetting and input from those impacted,” Rep. Darrell Issa, lead sponsor of the bill, said in a statement. “I’m thrilled at the House’s quick passage of my bill and look forward to it becoming law so we can start the process of removing unnecessary regulations and helping Americans get back to work.”

The Senate will soon take up companion legislation, but it could be more difficult to pass given that eight Democratic votes will be needed.
Posted by Diane Sori at 8:55 AM No comments:

Once again, the mainstream media has turned its back on a horrific crime committed by a refugee. As per usual, any story that does not conform to their politically correct narrative is of no interest to them.

A refugee newly arrived from Somalia has been tried and convicted for attempting to sexually assault a special-needs woman while she was sitting outside of a home for the disabled in Aberdeen, South Dakota.

Liban Mohamed, 39, was in the United States for only about a week when he tried to force himself on a 31-year-old woman with severe disabilities. He is not a U.S. citizen, but whether he will be deported in the wake of his conviction remains unclear.

The trial for Mohamed was held just a few days before Christmas and not a word of the conviction has made it into the local media, residents of Aberdeen told WND on Tuesday.

Mohamed speaks no English and required two interpreters at trial, according to the state’s attorney who prosecuted the case.

“I do know he lived in Aberdeen,” prosecutor Christopher White told WND. “The day that it happened, he was staying at the White House Inn hotel in Aberdeen. What came out at trial, in his defense attorney’s opening statement, was that he arrived in Aberdeen that day and had only been in the United States for approximately a week, and he had come to work at the beef plant in Aberdeen.

But I don’t know if he had already started working or was about to start work there.”
Mohamed mentioned to law enforcement that he had been hired on at the Demkota Ranch beef plant, White said.

Read the entire story here.
Posted by Diane Sori at 8:50 AM No comments:

Last month, Abdul Razak Ali Artan — an 18-year-old Muslim refugee from Somalia, who was receiving aid from Catholic charities — rammed his car into a building at Ohio State University. He then got out and stabbed people with a butcher knife, sending 13 people to the hospital before he was gunned down by police. […]

Barely two months after Hillary Clinton lost the presidency to Donald Trump, she is being urged by major Democratic donors and leaders to make a bid for New York City's mayor and challenge incumbent Bill de Blasio, Newsmax has learned. 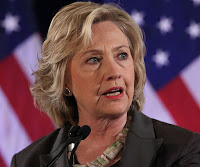 "She's talking about it," a former city Democratic elected official admitted to Newsmax over the weekend, saying the idea has not been dismissed by the former first lady's inner circle.

He and other sources say Clinton is being pushed to run by Democrats dissatisfied over de Blasio's mayoralty.

"If she ran, she'd win," another source with deep ties to the Democratic and media establishment said.

Some Clinton advisers are reportedly predicting Trump will stumble badly in his first term, encouraging Hillary to stay on the sidelines in case she wants to make another bid for the White House in 2020.

But even her closest allies say the chances of her running for president again are small.

Email ThisBlogThis!Share to TwitterShare to FacebookShare to Pinterest
Leave it to Obama to make one last effort to threaten U.S. national security before leaving office by releasing more barbaric, dangerous terrorists from Guantanamo Bay. In his final days, it seems as though President Obama is on a quest to create as much destabilization and conflict as possible. Luckily, we are only 16 days away from a Donald Trump presidency, which will ensure that no more terrorists are released from detention.

On Tuesday, it was announced that President Obama will transfer 20 additional prisoners from the Guantanamo Bay military prison before leaving office.

However, Donald Trump urged Obama to not transfer any more detainees, and reiterated that he would continue to keep Guantanamo open as president.

“There should be no further releases from Gitmo. These are extremely dangerous people and should not be allowed back onto the battlefield.”