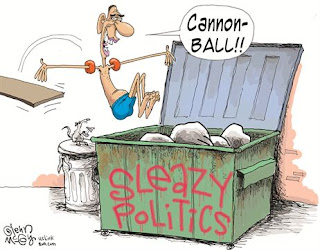 No Op-ed today as it's
Cartoon Sunday...
enjoy! 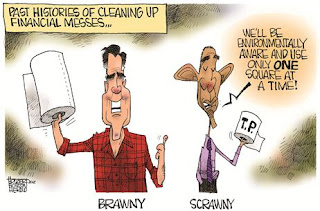 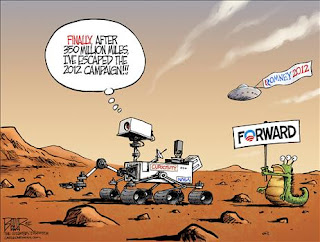 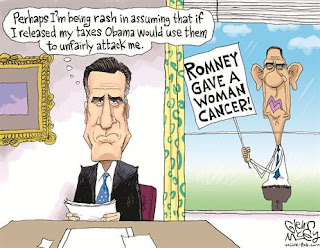 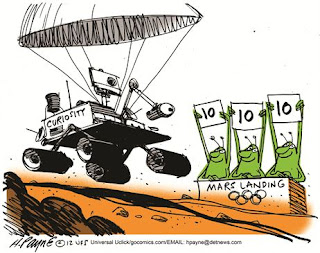 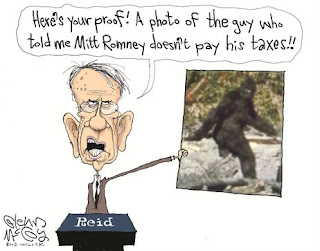 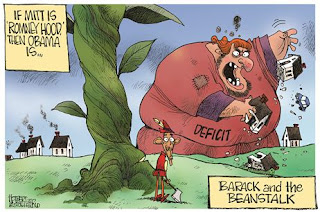 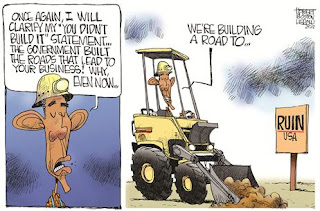 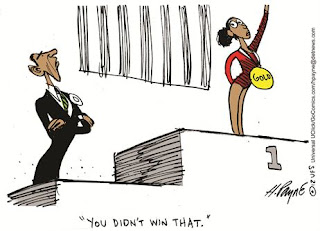 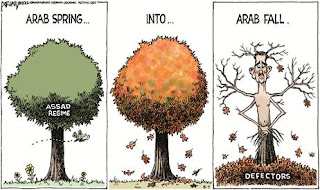 
When you think of Republican congressman Paul Ryan, terms like earnest, serious, and important come to mind. So does the term old-fashioned. Ryan comes from an old-fashioned place, the blue-collar town of Janesville, Wisconsin. He cherishes the old-fashioned values of a faithful family man. He even looks old-fashioned, with his white shirts and striped ties. And he uses old-fashioned argument skills, persuasively weaving big-picture themes with the numbers that back them up.

And Ryan has old-fashioned goals, too, like saving America from fiscal bankruptcy, economic stagnation, and a European-style entitlement state.
“Just look at what happened across the Atlantic,” Ryan told me in a year-end interview. “We have to avoid that. We must reclaim our founding principles of economic freedom and free markets. We must preserve the American Idea.”

With this vision, and with a pro-growth budget framework called “A Roadmap for America’s Future,” Ryan’s serious ideas have seriously gotten under President Obama’s skin.


In a White House meeting this year, Ryan’s superior knowledge of health care baffled Obama and left him speechless. And the serious Ryan budget, which lowers spending by $6.2 trillion and reduces deficits by $4.4 trillion over ten years, totally outflanked the White House. It embarrassingly exposed the Obama administration’s flimsy and inconsequential 2012 budget, which even rejected the findings of Obama’s own Bowles-Simpson fiscal commission. (Another Oval Office embarrassment.)

And when Ryan unveiled his first Medicare-reform package, which featured patient-centered consumer choice and market competition, the White House went nuts. Team Obama whipped up a Mediscare panic, resorting to a fictional caricature of Ryan forcing old ladies off a cliff. But the charge that the Ryan plan “ends Medicare” couldn’t be further from the truth. The website PolitiFact labeled this “the lie of the year.”

Ryan later amended his Medicare reform to keep the existing system as an option, and bolstered it with a menu of market-based private insurance plans to promote cost-cutting choice and competition. But he did so with the bipartisan support of Sen. Ron Wyden, a Democrat from Oregon. How did the White House react? It went rhetorically ballistic, although it couldn’t put together a serious response.

No, Ryan’s reforms didn’t quite resonate in the White House. But they did force a serious debate about domestic policy and the economy throughout the country. With his comprehensive budget of deep spending cuts, entitlement reform, and tax simplification -- a plan that would strictly limit government and unleash growth at the same time -- Ryan became the most influential Republican of his younger generation. Quite likely, he became the most influential thinker in today’s GOP. For these reasons, Paul Ryan has been chosen as the Human Events Man of the Year.

The Ryan “Path to Prosperity” budget passed the House this past spring. In effect, it became Republican policy. Unfortunately, things went downhill after that.

The summer debt-ceiling crisis produced a meager $1 trillion in spending restraint, way below the Ryan goals. Then the Supercommittee, which couldn’t even produce a policy, fell back on the trigger of another $1 trillion in automatic spending cuts. And now the year is ending in a chaotic and unserious gridlock over the temporary extension of a temporary payroll tax holiday that has no economic-growth content and ultimately would blow more holes in the Social Security trust fund and the overall budget. A disappointed Ryan told me, “Tea Party enthusiasm hasn’t yet translated into the kind of reforms we need. One-third of the government has only limited political power.” He added that the 2011 budget narrative shows “the total un-seriousness of the left in tackling problems.”

Nevertheless, the Republican budget leader is an eternal optimist. He believes “there is a shift to the right” in the country, “toward free-market approval.” He sees evidence that “We are winning this debate.” He says, “The country will not accept a permanent class of technocrats that will diminish freedom, enhance crony capitalism, and allow the economy to enter some sort of managed decline.” Ryan talks about “reclaiming founding principles,” and about “fighting paternalistic, arrogant, and condescending government elites who want to equalize outcomes, create new entitlement rights, and promote less self-government by the citizenry.”

In other words, Rep. Paul Ryan is offering a completely different vision than the one Obama outlined in his Osawatomie, Kansas, campaign speech in early December. Ryan wants “the right to rise,” not a third wave of liberal progressivism. He wants to stop Obama’s attempt to add to the New Deal/Great Society with the statist universal-health-care program called Obamacare and an effective nationalization of the energy and financial sectors. And he completely rejects Obama’s divisive, big-government, punish-wealth, tax-the-rich leftist populism.

“A ruling system of big business, big government, and big-government unions does violence to the notion of entrepreneurial capitalism,” Ryan told me. “Whether it’s TARP, Fannie or Freddie, cap-and-trade, or Obamacare, this must be stopped.” Ryan stands against what he calls “the moral endgame to equalize outcomes.” He says: “No consolidation of power into a permanent political class. Equality of opportunity, not result.”

Drawing from the Declaration of Independence, Ryan believes that individual citizen power in a democracy comes from God and natural rights, not government. And he believes these natural rights flow directly to the people. It complements what Reagan always said: Government works for the people, the people don’t work for government.

The congressman calls himself a second-generation supply-sider, flowing from his mentor Jack Kemp. He knows that growth incentives work, and that our tax system should reward success, not penalize it. Ryan frequently notes that Obama’s vision would raise federal tax rates toward 50 percent, which doesn’t even include increasing state and local tax burdens. Countering this, the Ryan roadmap features a modified flat tax, with two brackets and a 25 percent top rate.

But Ryan also believes that under the threat of fiscal insolvency, supply-side tax cuts must be accompanied by entitlement reform, deep spending cuts, and an end to corporate welfare. Rounding out his policy proposals, the budget chief wants the Federal Reserve to move to a single mandate for price stability and a stable dollar.

So, many have asked, why didn’t the intellectual and policy leader of the GOP run for president? His supporters continue this drumbeat, with many hoping for a deadlocked convention in August, and the emergence of an optimistic, pro-growth, center-right man with a clear vision to save the country.

Well, here comes the old-fashioned Ryan, a man who’s interested in policy, not personal ambition. He also has to help raise his young family. He and his wife Janna have two boys aged seven and eight and a girl aged nine. He’s been teaching his nine-year-old Liza how to shoot a .243 light-caliber Remington 700 bolt-action hunting rifle. The weekend before Christmas, he took his crew to Medieval Times on the North Shore of Chicago, where they watched knights on horseback jousting with each other while eating a little junk food. Family is clearly more important right now than presidential ambition.

So would he become OMB director in a Republican administration? “I don’t think about it,” he said. But for the 2012 election, Ryan has a political vision: Republicans must develop and communicate a clear policy agenda along the lines of his “Path to Prosperity.” Then, should they win, the GOP can use this agenda to govern effectively.

“Reagan had this right,” Ryan told me. For the congressman from Wisconsin, it’s the American Idea. That’s Ryan’s vision. And the Republican party better take notice, because this election could be America’s last chance for a very long time.

Email ThisBlogThis!Share to TwitterShare to FacebookShare to Pinterest
A message from The Tea Party.net
Posted by Diane Sori at 10:45 AM No comments:

Paul Ryan is not a safe pick. In fact, it is a pick that suggests Mitt Romney knows he needs to shift momentum in the race. When the GOP is winning on all the major polling questions of debt, deficit, and economy and still losing overall — the polling can’t all be wrong, including Fox News — the Romney camp needs a new direction and a more focused message.

What they had been doing was not and is not working.

Paul Ryan works. The most recently named Human Events Conservative of the Year is a lightening rod on the left for the Ryan plan, which balances the budget over the next two decades. What was not enough for some conservatives is too much for some liberals. Paul Ryan exposes the left’s great lie. They think they can just raise taxes on those who make $250,000.00 a year or more and never have to cut spending or fix entitlements.

Paul Ryan not only exposes that lie, but he has plans to solve it. He does so as a fresh, young face who is not at all scary to old people and relates to them and to young people. He himself is in his early 40′s with small kids. He’s from a swing state, out performed John McCain in his home district, and is telegenic and articulate. Paul Ryan is what Mitt Romney needs.

The left will demonize and demagogue Paul Ryan. They’d do that to anyone. This is a party that is currently accusing MItt Romney of murder and previously accused Paul Ryan of killing old people. The only problem is, the old people are receptive to Paul Ryan’s message. The bluster you hear today is a Democratic Party excited to have their bogey man as the Republican veep pick, with a little bit of nervous apprehension about what Ryan is capable of.

The sighs you hear are Republicans sighing some relief. Finally, the Romney campaign has a spokesman who can do what Mitt Romney has never been capable of doing — defend success and articulate a message of why we must reform our nation’s budget and support free markets.

After all the Romney campaign missteps and flubs of the past few weeks, I am encouraged. But we should be clear here: it is not enough, but it is an excellent start to a reboot.