Op-ed:
Ilhan Omar: An Affront to America, An Affront to the Constitution
By: Diane Sori / The Patriot Factor / Right Side Patriots on American Political Radio

...sometimes the worst terrorism of all is committed with but a simple volley of words...words bordering on if not actually being outright treason...
Posted by Diane Sori at 9:33 AM No comments: 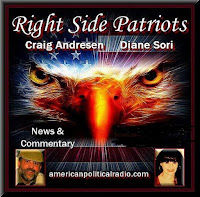 
Today, Friday, April 5th from 7 to 9pm EST on American Political Radio, RIGHT SIDE PATRIOTS Craig Andresen and Diane Sori discuss 'Ilhan Omar: An Affront to America, An Affront to the Constitution'; 'Holy Guacamole, Cow Farts, and Reparations'; and important news of the day.

This is just one of a great many incidents, most underreported if reported at all, demonstrating that border control is a national security issue. This incident could be related to the jihad threat as well. Certainly many jihadists have entered the U.S. through Mexico. “Syrian man caught trying to sneak into US at Mexico border,” […]
Read in browser »

Email ThisBlogThis!Share to TwitterShare to FacebookShare to Pinterest
Department of Homeland Security states that it ‘restructured’ domestic terror team

Thank Gd. Finally, some reality and logic. The ADL is furious, because it just put out a spurious report claiming that white supremacists and “right-wing extremists” were far more of a threat in the United States than Islamic jihadists. Such reports always ignore the fact that Islamic jihadis in the U.S. are part of an international organization, while white supremacists are just a handful of lone nuts. They also ignore the numerous failed plots, which Geller Report readers but few others ever hear about. The DHS is doing the right thing: focusing on the real threat. Expect the enemedia and the left to howl.

“Department of Homeland Security admits that it ‘restructured’ domestic terror team,” by Jeff Pegues, CBS News, April 2, 2019 (thanks to Christian):

Amid reports that it “disbanded” the unit that was focused on domestic terrorism, the Department of Homeland Security (DHS) is admitted Tuesday that it has “restructured” the team that once fed information about domestic terrorism and white supremacist groups to local police departments.

Read entire article here: https://gellerreport.com/2019/04/dhs-domestic-terror.html/
Posted by Diane Sori at 8:08 AM No comments:

Email ThisBlogThis!Share to TwitterShare to FacebookShare to Pinterest
New Poll: America Is Morally Divided Over Socialism

The opinions expressed by columnists are their own and do not represent the views of Townhall.com.
In his 2019 State of the Union address, President Trump drew cheers from mainstream America with his clear and compelling statement that America was founded on liberty and will never become a socialist country.  But not everyone cheered, and it is telling that an American president even felt compelled to make such a statement.  As the Democrats have become increasingly radicalized and openly supportive of socialism, President Trump saw the need to name the threat out loud and to rally freedom-loving Americans to defend their birthright.

Why is socialism even considered a possibility in America, a country that once prided itself on being “the land of the free?”

A new poll of 1,000 likely voters by McLaughlin Associates offers answers to that question.