Just a Thought...
A Double Standard for Sure
By: Diane Sori / The Patriot Factor

So it seems that Iran hacked the social media and email accounts of numerous State Department officials during the time of Obama's negotiations with Iran for the 'very bad' nuclear deal, and the administration and the media said NOT a damn thing about it. NOT only does that reek of a double standard but the words obstruction, aiding and abetting, and treason also come to mind.
Posted by Diane Sori at 12:09 PM No comments:

RNC Chairwoman: It's Time to Put An End to Trump-Russia Investigations

“This needs to stop,” she said on “Fox News Sunday.”

“This is a fishing expedition,” she added. “I’m calling for an end to the investigations about ... President Trump’s campaign colluding with the Russians. There’s been no evidence of it. I don’t think that should continue.”

Email ThisBlogThis!Share to TwitterShare to FacebookShare to Pinterest
Denmark: Extreme cruelty to animals in Muslim ghetto: heads pulled off cats, kittens cut up and intestines pulled out
By Nicolai Sennels / Jihad Watch

Halal slaughter is a cruel example of Islamic culture’s view on animal rights. Treatment of animals inside Muslim-dominated areas is another. WARNING: This article contains graphic descriptions of animal cruelty. Young children and sensitive adults may wish to avoid reading this content. “I’ve seen cats being played football with. I have seen cats with their […]

During the fifty years since its spectacular victory in the Six-Day War, when 300 Egyptian planes on eighteen airfields were destroyed within a matter of hours by the Israeli air force, Israel has faced a relentless campaign to delegitimize the Jewish state, and to simultaneously promote the notion of a “Palestinian people,” a people whom, we are repeatedly told, richly deserve a state of their own on at least some of the land that was “stolen” from them by the Jews. Part of that propaganda campaign has been to present the Muslim Arab war against Israel as susceptible of a “solution,” as long as Israel agrees to withdraw from its current borders, back to something like what it possessed before the Six-Day War, that is, the 1949 Armistice lines that the Arabs always refused to recognize, despite Israeli offers, as permanent borders. At the moment, there seems to be a temporary respite in the Muslim Arab war against Israel, given that Israel and a number of its Arab neighbors (Egypt, Saudi Arabia, the U.A.E., Kuwait, Bahrain) share the same fears of an aggressive Iran. But perhaps too much is being made of that ephemeral alliance; national interests can change, but Islam is forever. If the Iran threat disappears, how long will that much-ballyhooed alliance last, the one that is now said to exist, though unstated, between Infidel Israel and, mirabile dictu, a number of Arab states including, amazingly, Saudi Arabia?

Email ThisBlogThis!Share to TwitterShare to FacebookShare to Pinterest
Op-ed:
It Was a March Against Islam...and Rightly So
By: Diane Sori / The Patriot Factor / Right Side Patriots on American Political Radio

A few days ago, organized by 'Act for America's' Brigitte Gabriel, there were marches against the abomination known as sharia law all across this country, and now the media, including FOX News, is trying to make it out as a march against islam. But you know what, with sharia law being the implementing factor of islam replete with sharia's barbaric practice of female genital mutilation; viewing women as second-class citizens; viewing women as chattel to be raped, beaten, sold as sex slaves, and killed at will; for us to say this is not a march against islam is a lie for islam's sharia law views itself above the Constitution, above the Holy Bible, and above every moral value and ideal we as Americans hold dear.

And it is way past time that the entirety of 'We the People' stop being afraid to recognize and say out loud who the enemy really is...islam...all of islam...for there is NO moderate or radical islam... there is just one size fits all islam. And by the way, to be against islam is not to be a racist for islam is not now nor has it ever been a race for any person of any race, creed, or color can be a follower of islam...can be a muslim...period. 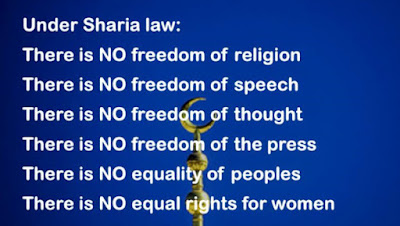