Will 2016 Be the Year of Abbas Diplomacy?
By A. J. Caschetta / Jihad Watch

Any early-January look ahead to the year in international politics would be incomplete without acknowledging the boldest diplomatic move of the year just ended. That move came when Palestinian Authority President Mahmoud Abbas stole the spotlight from far more visible diplomats John Kerry, Mohammed Zarif and Sergey Lavrov by threatening unilateral withdrawal from the Oslo […]

American Muslim charged in bombing attack on US base in Afghanistan

Will the islamophobia never end?


“American charged in bombing attack on US base in Afghanistan,” By Tom Hays, Associated Press (thanks to Lookmann):

NEW YORK (AP) — A U.S. citizen already accused of going to Pakistan to train with al-Qaida was charged Wednesday with helping build explosives for a 2009 suicide attack on an American military base in Afghanistan.

A revised indictment charges Muhanad Mahmoud Al Farekh with conspiracy to murder U.S. nationals, conspiracy to use weapons of mass destruction and other crimes. He is to appear Thursday in federal court in Brooklyn; there was no immediate comment by his lawyer.

The charges stem from an attack on Jan. 19, 2009, involving two vehicles driven by unidentified suicide...

Email ThisBlogThis!Share to TwitterShare to FacebookShare to Pinterest
The Constitution, the president, and guns
Obama has no right issuing firearms laws that Congress has rejected
By: Andrew Napolitano / The Washington Times 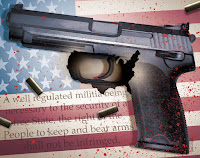 “A well regulated Militia, being necessary to the security of a free State, the right of the people to keep and bear Arms, shall not be infringed.”
—Second Amendment to the U.S. Constitution

In 2008, the Supreme Court laid to rest the once-simmering dispute over the meaning of the Second Amendment. In an opinion written by Justice Antonin Scalia, the court articulated the modern existence of the ancient personal right to keep and bear arms as a pre-political right.

A pre-political right is one that pre-exists the political order that was created to protect it. Thus, the court held, the origins of this right are the ancient and persistent traditions of free peoples and their natural inclinations to self-defense.

The court also characterized the right as fundamental. That puts it in the highest category of rights protected by the Bill of Rights. Though the origins of this right are from an era well before guns existed, the textual language in the amendment — “arms” — makes clear, the court ruled, the intention of the Framers that its continuing purpose should be to recognize the right of people to keep and use the same level of technologically available arms that might be used against them.