When President Obama declares something a "success story," you know it has "TOTAL FAILURE" embedded in its DNA.
Four months ago, America's King Midas in Reverse crowed about the fruits of his triumphant foreign policy in jihad-infested Yemen.

A "light footprint" approach to counterterrorism operations, he claimed, was the most effective path to stability. In addition, Obama has shoveled nearly $1 billion in American tax-subsidized foreign aid to Yemen.

Four months later, Iran-backed Shia rebels seized a Yemeni presidential palace. The president and his entire cabinet tendered their resignations on Thursday, creating a vacuum that al-Qaida in the Arabian Peninsula is ready and eager to fill. ISIS is gaining its own Sunni foothold in the Muslim terror-breeding ground. And while the JV team at the State Department dithers with hashtag games and selfies, adults at the Pentagon want to evacuate U.S. embassy personnel and other Americans before it's too late.

It would be bad enough if the current crisis were merely the result of incompetence and negligence. But Obama's disastrous Yemen policy reflects his radical leftwing administration's deep-rooted ideological sympathies for our enemies.

This is, after all, the man who wrote immediately after 9/11 that the well-funded and highly educated murderous hijackers' hatred grew "out of a climate of poverty and ignorance, helplessness and despair." Obama's pussyfoot strategy against jihadists was a direct rebuke to the supposed "cowboy" approach of George W. Bush, whom progressives blame for radicalizing poor, oppressed Yemenis. President Huggy Bear won a Nobel Prize for his "extraordinary efforts to strengthen international diplomacy and cooperation between peoples" and outreach to the Muslim world.

Let's assume George and Ethel, two teachers, purchased their Southern California home in 1966 for $45,000. Lets also assume that over the next fifty years, the value of the house increased to $1,345,000. Let's also assume that George and Ethel had four children and each of them went to a private four year college and that George and Ethel continued to re-finance their home to put their children through college and take a few cruises. Today, there is a $1,145,000 loan on the house. With pensions and other savings, the now retired teachers manage to pay their mortgage and live a quiet life.

If George and Ethel were to die today, there would be no estate tax and their children would get $200,000 from their inheritance. Under Mr. Obama's tax plan there would be $168,000 of taxes due as the result of his capital gains tax plan. With the cost of accountants etc., the children would get something less than the $32,000 under the proposal. This couple would see the inheritance to their children essentially wiped out.

The President, famous for using words to mask results, refers to this part of his tax plan as "closing the trust fund loophole."These two examples have nothing to do with the wealthy. The White House indicated that "99 percent of the impact of the President’s capital gains reform proposal would be on the top 1 percent." Although I find it highly unlikely that 99% of the impact would be on the top 1 percent, rest assured that literally millions of American homeowners, small business owners, and savers would be subject to the Obama tax plan.

Perhaps we should think of these American taxpayers as collateral damage.

Year after year, there are tax change proposals made by this Administration that have not been vetted with people who actually prepare tax returns or deal with real people. This Obama tax proposal is dormitory chatter; it is not well thought out legislation. At a time when Congress and the American people want to reduce the time spent with the Internal Revenue Service, enter the Obama tax plan.

This Obama tax plan is another accountants and appraisers relief act. Every business worth more than $200,000 would need an appraisal at the time of death, an accountant to work through the payment plan and the follow-up payments over what could be a lifetime. And let's not forget the additional IRS employees and IRS appraisers to monitor what would annually be perhaps tens of thousands of additional tax returns.

Rather than 6500 or so wealthy taxpayers paying estate taxes every year, the Obama tax plan takes this number into at least the tens of thousands. And if one is a bit cynical, the possibility of taxpayers actually filing these tax returns for truly small businesses is not going to be one hundred percent.

Yet again - amateur night with the middle class as collateral damage.

Iran now controls four capitals in the region Sanna, Baghdad, Damascus, and Beirut. None of Iran's jawdropping success in the region would have been possible without Obama's tacit support and sanction. They have postponed "nuke talks" to the point were deadlines mean nothing. Every time Iran misses a deadline, Obama jist moves it. And Iranians arm, build and enrich uranium. Whatever the US asks (begs, cajols, suggests) is laughed off. Iran is the world's number one state sponsor of terror.


"Three Arab capitals have today ended in Iran's hands and belong to the Islamic Iranian revolution". Supreme Leader Ali Khamenei, boasted that Sanaa has now become the fourth Muslim capital that is on its way to joining the Iranian revolution.
Alireza...


Black Sheriff to Al Sharpton: 'Go Back Into the Gutter"
Jason Devaney / NEWSMAX


Milwaukee County Sheriff David Clarke has a message for the Rev. Al Sharpton: "Go back into the gutter."

During an interview on "Fox & Friends" Thursday morning, Clarke, who has been making a name for himself as a conservative commentator in recent months, was discussing the police shooting in Ferguson, Mo. from last summer.

When asked to comment on Sharpton's remarks in the wake of the shooting that left an 18-year-old black man dead, Clarke was blunt.

"I don't expect anything intelligent to come out of the mouth of Al Sharpton," Clarke said.

"The next intelligent thing that comes out of his mouth will be the first. Al Sharpton ought to just shut up and go back into the gutter that he came from."

The segment was centered on Ferguson police officer Darren Wilson, who will reportedly not face federal civil rights charges for shooting Brown. He was cleared of criminal charges in November.

Sharpton said over and over the shooting was race-based because Brown did not have a weapon on him. But the evidence, released by St. Louis County Prosecuting Attorney Robert P. McCulloch, showed Brown attacked Wilson several times, leaving the officer no choice but to use his gun.

Clarke also had harsh words for Attorney General Eric Holder, who traveled to Ferguson after riots and violent protests broke out in the St. Louis suburb. Holder vowed there would be a federal investigation into the shooting, even after the grand jury's decision in November that said Wilson acted in self defense — and even after Holder's options to charge the 28-year-old officer were limited.

"Just take a look at the history here. This isn't the first time that he has done this sort of thing," Clarke said of Holder. "He sat up there for months just slandering law enforcement officers all across the nation. He's the one in Ferguson, Mo. that brought up the racial profiling term. That we were gonna end racial profiling once and for all. He invoked that into this thing, when that was never any part of what happened in the tragedy between officer Darren Wilson and Mike Brown.

"This is habit now for this Justice Department under Eric Holder, and I just think it's a shame."

Once again, the media fabricates a hero where there actually wasn’t one.

GalliaWatch (h/t The Opinionator) In the Kosher market stand-off in Paris,  where four hostages lost their lives on January 9,  Lassana Bathily, a young Muslim immigrant from Mali who worked in the market, was hailed as a hero for having helped a group of surviving hostages to find refuge in the refrigerated room downstairs.

It was said that he had led them down to the room, then turned off the lights and the cold, thus saving them from certain death at the hands of Ahmédy Coulibaly, who had already killed at least five people including a policewoman in Montrouge. 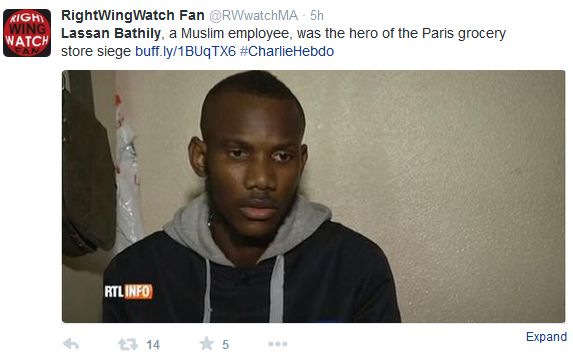 In a post dated January 11, some people were questioning the near instantaneous designation of the man as a hero. Now an audio recording of a discussion on Radio Courtoisie, a radio station headed by Henry de Lesquen, describes how the media fabricated a hero, out of a desperate need to justify massive Muslim immigration and to show there are “good” Muslims. Lesquen here leads the conversation:

I would like to begin, since it’s a headline story, with what they call the “making of a hero” – Lassana Bathily. Bathily is the national hero – and now he’s a French citizen, after French politicians fell all over themselves to to quickly naturalize him after the massacre.