Not to worry. “Valdosta police Chief Brian Childress said Wednesday that there’s ‘zero evidence’ the men are terrorists.” And we all know how good Obama-era authorities are at smoking out terrorists — just look at San Bernardino. Anyway, these men are “vetted moderates,” just like their comrades back home who committed all those green-on-blue attacks […]

How many other devout Muslims are stewing plotting and planning mass slaughter?
Stop the refugees into this country.

WASHINGTON (Reuters) – Syed Rizwan Farook, one of the shooters who killed 14 people in San Bernardino, California, last week may have contemplated an attack on a U.S. target as early as 2011 or 2012, a U.S. government source familiar with the investigation said on Wednesday.

Investigators are also looking into whether Farook had asked his neighbor,...

Email ThisBlogThis!Share to TwitterShare to FacebookShare to Pinterest
Op-ed:
Not Backing Down and Rightfully So
By: Diane Sori / The Patriot Factor / Right Side Patriots

“I am calling for a complete shutdown of muslims entering our country until we are able to determine and understand this problem and the dangerous threat it poses, our country cannot be the victims of horrendous attacks by people that believe only in Jihad, and have no sense of reason or respect for human life.”
- Republican presidential candidate Donald Trump

Empty rhetoric...I'm NOT so sure as the recent events in San Bernardino and Paris have reset the time clock still ticking down towards all-out war. And while many think Trump's media-called 'knee-jerk' reaction to these events is political fodder that has gone too far, there is some logic in what Trump said.

First off let me say I am NO supporter of Donald Trump and will only vote for him... with a clothespin on my nose I might add...if he does manage to secure the Republican nomination, however, like the proverbial broken clock that is right twice a day, Trump might indeed be right on this one.

Let's look at some of the facts...muslim/islamic terrorism...and for the uninformed a muslim is simply a follower of islam and can be of any race or nationality thus taking the discussion away from the racist innuendos the left so likes to throw out...is expanding worldwide at an alarming rate. And while it is common knowledge what groups like ISIS have done to Christians in the Middle East it cannot be forgotten that since September 11, 2001, when 19 islamic terrorists murdered almost 3,000 Americans, up until the time of this writing, there has been 89 Americans killed in 48 separate acts of islamic terrorism including 'honor killings' here on American soil, and all were acts committed in allah's name. And yet only one muslim, Waqar Hasan, a muslim convenience store owner in Texas, was targeted and killed in an act of revenge, and in Hasan's case that revenge was for 9/11. And while Obama loves to speak of discrimination against his brethren by the American public...that one statistic proves otherwise as the American public has proven to be 'civilized'...if you will...to the point of understanding that 'civilized' people do NOT go after individuals just because they might be disgusted with a group as a whole.

But that cannot be said for muslims whose first act of jihad in America was committed in 1972, when 10 members of a New York City mosque called in a 'false alarm' to police then ambushed and killed one officer and wounded three others when they responded to the call. And 15 more acts of jihad occurred during the 1970's; three during the 1980's; six during the 1990's; 28 during the first decade of this century; and from 2011 to the most recent being the San Bernardino Massacre, 15 acts of jihad have been committed on American soil...and the year is NOT even over yet. 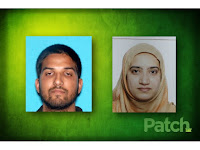 And know that when these acts of jihad are committed...acts specifically designed to instill fear into the populace...they are done so to inflict the most carnage and death as possible. Remember, the San Bernardino husband and wife killing team that had already murdered 14 innocent party-goers, left behind three bombs set to detonate when the first responders went in...but thankfully did NOT go off. And just know that as the muslim population increases here in America, as they breed to the tune of up to 10 or more children per wife...logic dictates so too will the number of terrorist attacks as the 'pool' from which the islamist recruiters can draw from grows bigger. And with almost 25% of American muslims believing that violence in defense of islam is justified in some cases... paralleling the worldwide figures that believe so as well...the number of potential terrorists grows proportionately as their numbers increase. And do NOT forget that when American muslims remain silent and do NOT condemn these acts they are in fact condoning them.

Another fact that must be given consideration is that today's jihadis seem to come from two main sources, the first being the younger generations of muslims living in the West, including those here in America, generations who are more radical in their leanings than their parents generation; and second, they are born from the majority of U.S. mosques and islamic centers that are part of an Obama hushed-up 'jihadi network' of sorts...a network with ties to the Muslim Brotherhood...the very islamic terrorist group Obama has allowed into the halls of our American government. Now if you add in the tens of thousands of 'cannot be vetted' muslims that Obama wants to bring into our country...who of course in turn will breed and multiply...you just know that the bottom line is that more Americans will die.

And lastly, a recent poll taken by the 'Center for Security Policy' found that a whopping 51% of all American muslims want to have a choice between being governed by the U.S. Constitution or instead by the tenets of sharia law...an islamic legal system geared against women that allows for murder, rape, pedophilia, and all sorts of other nasties done in the name of islam...done in the name of allah.

So Trump saying that he wants a temporary “total and complete shutdown” of our borders to muslims seeking immigration visas, to American muslims currently overseas, as well as to muslim tourists just wanting to 'visit'...yeah right...Trump is NOT being hateful nor is he being discriminatory, but is being a pragmatist basing his words upon factual information like that stated above...factual information some might NOT want to hear but facts just the same. And also a fact that must NOT be forgotten is that muslims as a collective whole hate America and Americans, after all we of the Jewish and Christian faith...we who support the Jewish State of Israel...are the very infidels the qur'an commands them to kill.

And being that Trump's comments are based upon indisputable facts, the Obama White House saying that said comments should disqualify Trump for the office of the president and that other Republican presidential candidates should say "right now" that they would NOT support a Trump presidency, is just their version of political fodder playing to their base coupled with a hefty dose of hypocrisy, for remember, this very same White House is turning Iraqi Christians away. And then their adding in that Trump's proposal was NOT only offensive but would undermine national security by “thwarting efforts to connect with the muslim American community” is really the ultimate joke, for the fact remains that the muslim community here in America does NOT want to be part of America...does NOT want to be part of the fabric of our American society...does NOT want to assimilate...but wants America to bend and subjugate to their 7th century ways.

And saddest of all is that some here in the U.S...including some of our elected officials...do NOT see the underlying validity in what Trump is proposing. And that includes St. Petersburg, Florida, Mayor Rick Kriseman who has banned Donald Trump from his city after claiming Trump's proposal is "an attack on democratic values"...which by the way it is NOT as democratic values include above all else protecting the 'health, safety, and welfare' of the American people. And that is something the Obama administration is NOT doing, first, by still NOT saying the words 'islamic terrorism,' and second, by the very act of NOT admitting that we are indeed in a war against islam...the entirety of islam.

Refusing to identify the enemy we face, and with Obama still saying that “Isil (yet another shout-out to the Levant) does not speak for Islam,” the truth is that only when muslims here in America challenge the fundamentalism permeating throughout the qur'an...the very fundamentalism that radical islamists the likes of ISIS have adopted...only then will the threat of terrorism be somewhat diluted here in this country. And I say diluted and NOT eradicated because having seen islam infecting the countries of Europe to the point that said infection might NOT be able to be eradicated simply because they waited too long to do so, should give us pause to think this thing through more clearly.

And Europe waiting too long is because of their open border policy...a policy of welcoming any and all into their countries...and we need to learn from the lessons of Europe if we are to stop a true invasion from happening here as well. And while a wall per se is just mere window dressing, it's laws made and then enforced...with 'enforced' being the operative word as only enforcement can do what simple walls cannot do...as in keep the enemy out...has me believing that until that is done Donald Trump has it right in wanting to keep muslims out of America... especially when embedded in those wanting to come in are 'operatives' of the very groups we want kept out.

But where I differ from Trump's sentiment somewhat is that there always must be exceptions made for 'good muslims' and their families if you will...muslims who are outwardly and publicly fighting the islamists and putting their own lives in danger by doing so. And by that I mean true moderate muslims like Mudar Zahran, Secretary General of the Jordanian Opposition Coalition...a pro-Israel, Palestinian leader, living in exile for his actions in both trying to remove Jordan's Muslim Brotherhood supporting King Abdullah II from power through peaceful means, and putting in place a secular democratic-style government aligned with Israel instead. 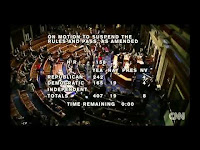 And it must be understood that while many voices, both political and in the media, have come out against Trump's comments, on Tuesday, the House voted 407 to 19 to support the Visa Waiver Program Improvement Act of 2015 (VWPIA), which imposes restrictions making it more difficult for those from Iraq, Syria, and other muslim countries listed as supporting terrorism, to travel visa-free to our country. And the VWPIA also requires countries in the visa waiver program to share counter-terrorism information with the U.S., issue 'e-passports' with biometric information, and mandates that 'travelers' be checked against Interpol databases. But even with all this proper vetting cannot be done for what remains at the heart of the problem is how can we properly vet those from countries whose databases are almost non-existent. Simply, we cannot, and therefore Donald Trump's proposal makes more that just a bit of sense.

Makes more than just a bit of sense I'd say even as the 'in-the-pocket-of-Obama' media is now using Trump and his comments...and know that Trump is eating-up even this negative attention...to again divert us from the other issues we as a country face, as well as to give their ratings slump a much needed shot in the arm...all while forgetting that there is an enemy out there most definitely out to kill us all.