Op-ed:
A Special Day to Honor American Heroes
By: Diane Sori / The Patriot Factor / Right Side Patriots on CPR Worldwide Media cprworldwidemedia.net
Author's Note: I was asked to rerun a series of articles I wrote honoring those who gave their all for love of country. 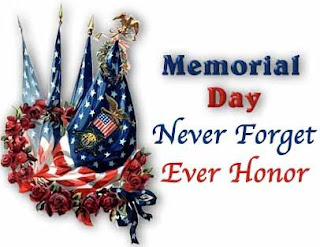 What is a hero...a hero is man or woman of distinguished courage or ability, admired for his or her brave deeds, fortitude, and noble qualities.

In other words...a Soldier, Sailor, Marine or Airman.

Memorial Day...a day to remember and honor all those brave heroes who made the ultimate sacrifice in our nation's service...a special day where a grateful nation says thank you.

Memorial Day is also a day to honor and say thank you to our Veterans, those heroes who by the grace of God made it home, who are sometimes forgotten in the shuffle of everyday life.

This Memorial Day we must not forget to keep our brave men and women who are currently fighting overseas in our thoughts and prayers for they are the ones who are now keeping us safe and free at home.

A little history...Memorial Day started as a day to honor Union soldiers who died during the Civil War. After World War I it was extended to include all men and women who died in any war or military action.  Known originally as Decoration Day, the current name did not come into being until after World War II. Decoration Day and then Memorial Day were always on May 30, regardless of the day of the week.  In 1968, the Uniform Holidays Bill was passed as part of a move to use federal holidays to create three-day weekends.  Since 1971, Memorial Day has been officially observed on the last Monday in May.

On Memorial Day it’s tradition to fly the American flag at half-mast from dawn until noon. Many volunteers place a small American flag on the graves of the fallen who are laid to rest in national cemeteries all across our country.  Also, in many cities and towns across America, Memorial Day Parades honor both the fallen and those serving in our military today.

While this weekend there will be picnics, barbeques, and parties galore, please don’t forget that while you are having fun and enjoying the day, that what you are doing was only made possible by those who sacrificed their lives in the name of freedom.

So now I leave you with this, A Soldiers Prayer, whose words really honor ALL who’ve served.

The soldier stood and faced his God which must always come to pass...
He hoped his shoes were shining just as brightly as his brass.
"Step forward now, you soldier, how shall I deal with you?
Have you always turned the other cheek?  To My Church have you been true?"
The soldier squared his shoulders and said, "No, Lord, I guess I ain't...
Because those of us who carry guns can't always be a saint.
I've had to work most Sundays and at times my talk was tough,
And sometimes I've been violent, because the streets are awfully tough.
But, I never took a penny that wasn't mine to keep...
Though I worked a lot of overtime when the bills got just too steep,
And I never passed a cry for help, though at times I shook with fear,
And sometimes, God forgive me, I've wept unmanly tears.
I know I don't deserve a place among the people here...
They never wanted me around except to calm their fears.
If you've a place for me here, Lord, It needn't be so grand,
I never expected or had too much, but if you don't, I'll understand."
There was a silence all around the throne where the saints had often trod...
As the soldier waited quietly, for the judgment of his God,
"Step forward now you soldier,
Walk peacefully on Heaven's streets,
You've done your time in Hell."
Dedicated To All That Serve... God Bless America!
Posted by Diane Sori at 12:20 AM No comments:

Memorial Day...the 'unofficial' start of summer and as we get lost amongst the B'B'Qs, picnics, and beach parties, please take a moment to say a prayer for those lost...for those who gave their all so that we...the greatest nation the world has ever known...remains free.These are trying times yet America will triumph NO matter who tries to take her down because of those who gave their all and because of those who came back while maybe NOT whole. May God bless and protect all out troops currently in harm's way, and may He keep those now in his charge safe until we meet them again. 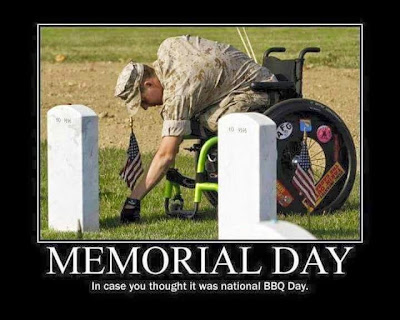 Today, Saturday, May 23rd, on RIGHT SIDE PATRIOTS on CPR Worldwide Media from 11am to 1pm EST, Craig and Diane will discuss the Iranian nuclear deal and its oh-so sneaky ties to North Korea, a special salute in honor of Memorial Day, and drumroll please...MOOOOchelle drops a Cow Pie with graduation speech.

Hope you can tune in:
http://cprworldwidemedia.net/radio
And chat with us live at:
https://www.facebook.com/ 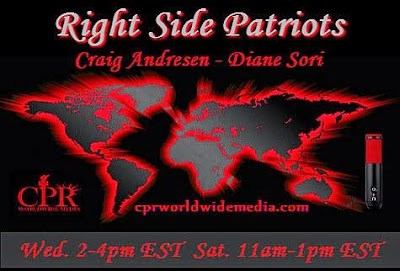