Everyone is focusing on Obamacare because it is such an obvious disaster, but in fact, it is but a microcosm of Barack Obama's entire presidency. Obamacare is Obama unmasked.

Aren't some of you tired of making lame excuses for him that only serve to make things worse? He has made a mess of nearly everything his policies have touched, and he's mostly avoided the blame; but he owns Obamacare, and he has nowhere to hide.

When someone with the influence Obama enjoyed upon first taking office sets out to fundamentally transform the nation -- and he has the unqualified support of the entire liberal media apparatus, the Democratic Party in lock step, millions of people purchased with government money and/or indoctrinated in liberal universities, and the cudgels of racial shaming and white guilt -- the possibilities are endless.

Constitutionalists have observed for years that America has been on a downward spiral as its ruling class has discarded its founding principles -- the very ideas that led to this nation's uniqueness, power, prosperity and benevolence. We've known that we could not forever piggyback, with impunity, on America's system of limited government and its free market economy. Eventually, statist encroachments on both would destroy our prosperity, liberty and power.

But we were thinking in terms of decades into the future, not a matter of a few years. Who would have ever thought the United States would embark on such an accelerated path of national suicide?

At the beginning, people could argue that Obama would usher in a period of prosperity and bipartisanship and that things would get better in America. But after five years of unconscionably reckless federal spending, a wholesale assault on our domestic energy industries, endless abuses of executive authority and other lawless incursions on the Constitution, unprecedented divisiveness and polarization across economic, racial and gender lines, America's declining power and prestige in the world, an explosion of the welfare state, and the worst economic recovery in 60 years, how can anyone who cares about this nation's future and the well-being of our children and grandchildren keep supporting this man's policies?

Even those of you who seem to have an endless capacity for buying into the administration's childish scapegoating of the Bush administration or the current GOP opposition for every Obama policy failure surely are beginning to have doubts as you watch the inglorious unfolding of Obamacare.

At first, you may have been hanging on to the fantasy that this was just a technical problem with the website -- perhaps marginally understandable given the immense scope of the "transition" into government-run health care. But unless you have been asleep the past few weeks, you understand that the problems with the website were so colossal that only an incompetent and arrogant administration could have presided over them.

But you also know that as horrendous as the website problems are, they pale in comparison with the substantive problems with Obamacare and Obama's abject lies to pass the bill in the first place and his continuing pattern of deceit concerning this boondoggle.

You may choose, like New York Times editors, to become part of the lie and euphemize Obama's Obamacare lies as "misstatements." But that's an insult to anyone in possession of the left side of his brain. Actually, it's an insult to right-siders, too, because you'd have to be bereft of intuitive powers not to sense the enormity of the presidential deception.

It is inconceivable that Obama merely misspoke when he promised that Americans could keep their private plans and doctors if they liked them and when he said the premiums for an average family of four would decrease by $2,500. Those were cold, calculated lies designed to defraud the American people and their representatives into supporting Obama's "signature" legislative dream, which was never about increasing access, reducing costs, increasing quality and preserving choices. Rather, Obamacare has always been nothing less than the linchpin in Obama's bigger dream to fundamentally change America into a nation he could like instead of resent -- a socialist utopia rather than the land of the free, of the brave and of equal opportunity.

Those on the left who stubbornly insist on continuing to support Obama and his destruction of America need to re-evaluate him. Is your appetite for denial unbounded?

Those on the right who insist on continuing to pull their punches instead of calling it like it is will also eventually have America's blood on their hands.

We all had better wake up. There's only so much bitterness and covetousness a nation's leaders can arouse in its people before they reduce it to permanent mediocrity.

Posted by Diane Sori at 4:49 PM No comments:

Email ThisBlogThis!Share to TwitterShare to FacebookShare to Pinterest
'Affordable' Care Depends on the Size of Your Subsidy
Byron York / Townhall Columnist

What does the word "affordable" in the Affordable Care Act mean? Many people might assume it means Obamacare will make health coverage less expensive. That's certainly the impression President Obama gave when he promised his national health care scheme would "cut the average family's premium by about $2,500 per year.

But Obama and the Democrats who passed the law didn't really mean that premiums will go down. What they meant was that premiums might well go up, but the government will give some Americans money with which they can pay the higher premiums and still come out ahead.

For some people that will be true. For others, not so much. Unlike Social Security and Medicare, Obamacare is a means-tested entitlement program. It will give low-income Americans substantial taxpayer-paid subsidies with which to purchase insurance. People who make a bit more will receive smaller subsidies, and those above a certain income level will receive no subsidies at all. If they have to purchase higher-priced coverage, that's their problem.

The pro-reform Kaiser Family Foundation has created on its website a subsidy calculator into which anyone can enter his location, income and family size to come up with an estimate of how big, or small, his Obamacare subsidy will be.

Start, for example, with a low-income family of four living near St. Louis, Mo., with $35,325 in household income (that is 150 percent of the federal poverty rate for a family that size). A Silver Plan policy for the family would have an annual premium of $8,088, according to Kaiser. But the family would receive a taxpayer-paid subsidy of $6,675, which means the family would pay, with its own money, just $1,413 for the coverage. (Kaiser chose the Silver Plan for the calculator because that is the plan that determines the size of Obamacare.

Of course, most families of four in Missouri make more than $35,325 a year. The 2012 Census Bureau estimated that the median income for a Missouri family of four was $72,230 -- meaning that half the state's families of four are below that level and half are above.

For a family that is right on the median income, $72,230, the annual premium would still be $8,088, but the taxpayer-paid subsidy would fall to $1,226, meaning the family would pay, with its own money, $6,862 for the coverage. Is that a better deal than they have now? Maybe yes, and maybe no. In any event, they won't save as much as the president promised.

Finally, choose a higher income level, but one at which there are still a lot of people. For a family of four with an income of $85,000, the premium remains $8,088 but the subsidy shrinks to just $13 a year, meaning the family will pay, with its own money, $8,075 for coverage. So that family will technically receive help with its health care costs -- but not really.

For families above that level, and there are a lot of them, the subsidy will be $0. The bottom line is, when -- or if -- large numbers of people actually begin purchasing coverage on the Obamacare exchanges, many will find the much-touted subsidies aren't for them.

The administration and its defenders might argue that the numbers will be a bit different, that some premiums could be lower or subsidies higher. But the basics are the same: Obamacare is all about subsidies, and "affordable" means the government is paying for all or part of it.

That is why the administration and its defenders are urging Democrats nervous about the disastrous Obamacare rollout to just wait for the subsidies to arrive. When that happens, they say, the Obamacare controversy will subside.

Whatever the case, the cost to taxpayers will be enormous. Obamacare limits the percentage of income that subsidy-receiving Americans have to spend on health coverage. Those at the top of the subsidy ladder are obligated to spend no more than 9.5 percent of their income on premiums. Those lower down pay a lower percentage -- for that family of four with $35,325 in annual income, it would be 4 percent.

So the "affordable" in Affordable Care Act doesn't really mean affordable at all.

Posted by Diane Sori at 4:43 PM No comments:

What Obama really meant to say... 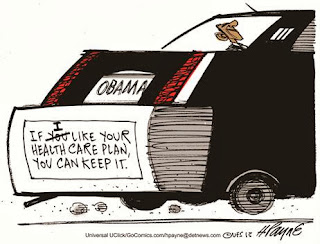 Posted by Diane Sori at 2:51 PM No comments:


More moderation from the New, Moderate Iran. Note how in this story Khamenei is a moderate, whereas in this one he is a hardliner. "Iran Supreme Leader Ali Khamenei Calls Israel ‘Bastard Regime,’" from the Washington Free Beacon, November 4:


Khamenei’s comments seem to undo the work done by Iran’s recently elected “moderate” President Hasan Rouhani, who has been on a charm offensive of late. Rouhani’s semingly moderate approach has led to a renewed round of nuclear negotiations with the P5+1 — U.N. Security Council permanent members Britain, China, France, Russia and the U.S., plus Germany.


Khamenei voiced his support on Sunday for Iran’s talks with world powers over its disputed nuclear program, while expressing pessimism about them.

“No one should see our negotiating team as compromisers,” Khamenei, Iran’s top decision-maker on its nuclear drive, was quoted as saying on his official website. “I am not optimistic about the [nuclear] negotiations but, with the grace of God, we will not suffer losses either,” he added.

The slap from Rubio — who humiliated Crist in the 2010 GOP Senate primary — came after the ex-governor announced he'd be running for the Democratic nomination to challenge Gov. Rick Scott next year, Sunshine State News reported.

Crist joined the Democrats at the end of last year.

"Floridians have a clear choice between a governor with a proven record of job creation, and a consummate political opportunist that can't be trusted,” Rubio said.

“Charlie Crist's governorship was underwhelming, to say the least. Rick Scott has proven himself very capable of cleaning up after Charlie's mess, creating jobs, and restoring Floridians' hope about the future."

Some of Florida’s most prominent Democrats stood with Crist for his formal campaign announcement when he suggested his flexibility is a plus for voters sick of partisan warfare in Washington and Tallahassee, The Washington Post reported.

“The far-right wing seems to want to make much of my party affiliation,” he told cheering supporters and family members, including his Republican parents. “That is precisely what’s wrong with politics today.”