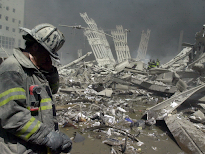 It's been 20 years...almost a generation...and yet to me and many others it seems just like yesterday.

And so as we approach this most sacred and solemn of days we now sadly see hovering over our country a fear that this horror might well be repeated. And while I and so many others still cry and pray for both dear friends and family lost and even for those we didn't personally know, September 11, 2001 will always remain the day America's heart was pierced as buildings fell, a plane crashed in a field, and we as Americans came together to collectively mourn. And mourn we did not only for those lost but for our country as well...for our beloved America was now and forever changed in the span of just one single day...a day when we saw and felt camaraderie... a day that now sadly finds us again being divided.

And for those of us who were forced by circumstances to suddenly grow up and leave childhood behind...for those of us who actually tasted the all-powerful and forever lingering smell of death...and even for those of us who were personally untouched by an event that should not ever have been…we all have ingrained within our consciousness images that haunt...images once unimaginable of destruction and death here on American soil...destruction and death that mingled together the blood of our fellow countrymen…images that have now become, for some, but a sad reminder of the evils that men do while believing their misplaced cause is both just and righteous.

But there are also images remembered of true heroes born...like Todd Beamer and his fellow passengers who turned two simple words, "Let's Roll," into our nation’s then newest battle cry...as well as images of true warriors lost...60 brave men and women in blue, 12 brave paramedics, and 343 brave firefighters including Father Michael Fallon Judge, the chaplain of the NYFD who passed away while tending to the wounded and dying...heroes and warriors gone in the mere blink of an eye.

And September 11th should always be remembered as the day when "hyphens" were dropped and "Old Glory" could be seen flying proudly everywhere across this great land as Americans came together to unite and stand undivided as one...Democrat, Republican, Christian, Jew, white, black, brown, yellow, red, and police blue...all joined together...all sharing the same sadness and pain. Yet now that feeling seems lost even though the happenings at "Ground Zero" in New York City, the Pentagon complex, and at a vacant field in Shanksville, Pennsylvania should remain sacred American holy grounds that forever help keep us all united in God’s embrace. 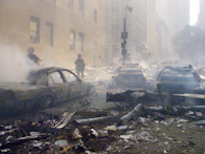 And as we approach another September 11th, know that we are embattled not just with enemies in far off lands, but with enemies within our own country as well...enemies who we are sadly allowing to not just take away our hopes and dreams, but our memories of that fateful and cruel September day.
And it's these very enemies within, via our misguided complacency, that have allowed our children's future to be selectively targeted with their erasing of America's past...9/11 most surely to be included. And without memories of our nation's past...ugly as some of those memories might be...we as a nation cannot truly become what we were destined by our Forefathers to be, for when American flags and statutes are ordered to be taken down, when the roll call of victims names is discouraged...9/11 victims, Benghazi victims, and those of our recently lost military heroes as well...9/11 becomes just another day in the calendar, and that is something we cannot nor must not allow to happen. 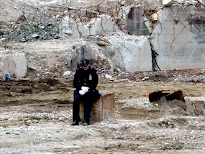 And with the "Freedom Tower" now reaching up to touch the sky where the "World Trade Center" once stood, a simple message in concrete and steel still tells the world that not only did America come back from the ashes...but that the spirit of camaraderie felt on that fateful day can once again be ignited within us...but only if we allow it to be.

And yet in my heart of hearts I still do believe that America will never truly be brought to her knees...she might stumble and fall a bit as we sadly are now bearing witness to...yet the fact remains that America will indeed survive because America must survive. And survive we will not just for us, the generation who lived the nightmare that was 9/11, but for future generations as well...that is as long as we put partisan politics and old hatreds aside and unite together to collectively become as one..."We the American People."
And the kinship of being one with America should be the main lesson learned from a sunny September day so many years ago...a day when the "spirit of survival" itself along with pride in our country was awoken in everyday Americans...Americans from all walks of life...Americans of every color and creed...the "spirit of survival" that must not now nor ever be taken away from "We the People' no matter what evils befall us, for by taking away that "spirit" you've taken away our country's very reason for being. 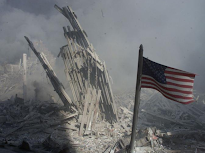 And so when we gather together to remember and honor the 2,973 victims of 9/11, let's also remember and honor the four victims of another 9/11... Ambassador Christopher Stevens, Information Officer Sean Smith, and ex-Navy SEALS Glen Doherty and Tyrone Woods...four brave men who, too, made the ultimate sacrifice in a nightmare called Benghazi. And we should also honor the thirteen heroes who recently made their final journey home in caskets draped in American flags, for their sacrifice was made in Afghanistan, the very land where 9/11 actually began.

2,973 heroes, plus four, and now plus thirteen more. God Bless them all for they're finally "home" to be forever safe in "His" arms...never to be hurt again…never to be forgotten...always to be honored and to live on in our hearts...for by us honoring them...by us remembering them...both their memories and their life's history will live on. 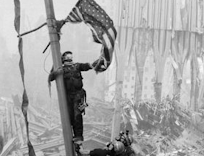 For those who have sadly forgotten the true horrors of 9/11, this video '9/11: Ground Zero Underworld' shows not only the nightmare itself, but the personal side of the heroes who searched and died below Ground Zero in the immediate aftermath of the day that changed America forever.

This video from the History Channel gives a visual timeline of the most horrific event in our nation's history.

And lastly, below is what I consider to be the most powerful and memorable 9/11 commemorative commercial ever made...officially only run once...rightfully replayed via the internet countless times.

Hope you can tune in to RIGHT SIDE PATRIOTS on https://rspradio1.com. Click 'LISTEN LIVE' starting at 6:50 pm EST with the show beginning at 7pm EST.
Posted by Diane Sori at 5:36 AM No comments: