And now there are none 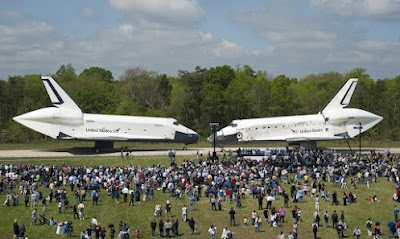 The space shuttles Enterprise, left, and Discovery meet nose-to-nose at the beginning of a transfer ceremony at the Smithsonian's Steven F. Udvar-Hazy Center, today, Thursday, April 19, 2012, in Chantilly, Va.

Discovery, was the first orbiter retired from NASA’s shuttle fleet, and completed 39 missions, spent 365 days in space, orbited the Earth 5,830 times, and traveled 148,221,675 miles.  It will take the place of Enterprise which is moving to the Intrepid Sea Air and Space Museum in New York.

By being on display, these shuttles will commemorate past achievements in space and be used to educate and inspire future generations of space explorers...that is once Obama is out of office and NASA's main funding is reinstated, because if he is re-elected we can kiss future space missions goodbye.

Thanks again Obama for destroying yet another piece of our American exceptionism...from us being the leader in space exploration to now being mere observers.

Posted by Diane Sori at 5:29 PM No comments:

Email ThisBlogThis!Share to TwitterShare to FacebookShare to Pinterest
Op-ed:
And Congress does nothing
By: Diane Sori
Listen up you jokers in DC... my fellow patriots and I believe that both the Declaration of Independence and the Constitution are the greatest documents of freedom and liberty ever written even if you don’t.  We know our Founding Fathers, thankfully, were wise enough to understand that tyranny and civil unrest could arise down the road if some in power used that power to overstep their bounds, so they put in place checks and balances to make sure that ‘We the People’ would be free from those who would try to do just that.  Yet, those in Congress either refuse to see or refuse to accept the fact that this very thing IS happening right now before our very eyes...and do nothing.
Two hundred and thirty six years after those great documents were written we have one such individual doing what are Founders feared above all else...turning our free Republic into a dictatorship.  Our usurping traitor of a president, Barack Hussein Obama, believes that our Constitution, the very document that is the heart and soul of our beloved country, is outdated and irrelevant.  Obama’s plan to 'fundamentally transform' America shows just how much he hates the Constitution and everything our great nation stands for.  His secret behind closed door deals, manipulations, socialist leaning rhetoric, while putting in positions of power unvetted officials and czars, helps put his mission of forcing unconstitutional mandates and majority unwanted legislation, like ObamaCare in place, as we sit and watch those in Congress, those that work for ‘We the People’ do nothing to stop this man.
And he lies, oh how he lies.  Obama lied about how jobs would be created if his Stimulus Proposal was passed, a proposal that was supposed to create and/or save 3.5 million jobs he said, a proposal that he rammed through Congress, a proposal that failed miserably and has done nothing to create or save those jobs as promised.  Our reported unemployment rate is still above 8.5%, but in reality is over 15%, thus his Stimulus fiasco did not create even one net plus jobs figure.  And those in Congress do nothing about this.
We now have a record breaking deficit and debt, a debt made higher in his three and a half years in office than the debt of all presidents combined who preceded him.  And all Congress does to remedy this is raise the debt ceiling even higher.  Not a smart move and yet they did it just to placate this man and make it look like they were actually working.
We now have the highest corporate tax rate of any country in the world.  It’s no wonder companies do not want to locate and do business here; in fact this tax rate has caused some of our own major companies to move out of this country to save paying exorbitant taxes.  And again Congress does nothing to help our American companies garner business or even to stay in business.
We now have a president who says the hell with the War Powers Clause and declares wars, or as he calls them ‘military actions,’ with countries that are not at war with us.  We now have a president who turns his back on our allies as he sides with our enemies.  We now have a president who apologizes, defames, and demoralizes our brave men and women in uniform as he not only apologizes for both our country and for the actions done by our military in behalf of our country, but publicly condemns those actions and those who did them... this from a coward of a man who never wore the uniform of our country.  And again Congress does nothing.
We now have a president who delights in causing racial tensions and class warfare amongst the people of the nation he swore to protect.  And Congress does nothing once again.'
And why does Congress do nothing in these instances and so many more...why do the very people we elected to protect and serve us, why do they do nothing to stop this man?
The why is simple...we have a president who along with his minions, is holding this Congress hostage by hanging the race card over their heads.  The infamous race card is being used by a man who is the biggest racist of all...a man who hates whites...a man who hates that his very mother was white...a man who has denied his true heritage just to be able to say that people don’t like him because he is black.  Well guess what, Obama, you aren’t black, you’re bi-racial, mixed race if you will, whether you care to accept that as fact or not.
This race baiting, vile man is who Congress is afraid of because they fear if they challenge him that they will be called racists...they fear they will lose their re-election bids because the main stream media will go along with this man and will peg them as racists and perpetrate that lie every chance they get.  And those in Congress fear losing their high paying jobs and all the perks that come with the job.  But basically, they fear fear, and that fear has so paralyzed them that they are afraid to stand up and do the right thing not only for the very people that put them in office but for the country they swore their allegiance to.
And this is so sad because their fear is helping Barack Hussein Obama accomplish his goal of destroying the very nation, I believe, most in Congress still hold dear.
Posted by Diane Sori at 4:11 PM 2 comments:

Today is Yom Hashoah.  Remember and pray for the 6 million lost.  Remember those whose futures were taken away.  Remember them well, for if we do not, it could very well happen again.

Nicolai Sennels: People should not be citizens of the country they wage war against: Revoke terrorists' citizenship

Recently the United Arab Emirates imprisoned six Islamic supramacists because they had refused to seek alternative citizenship after the UAE had revoked their status as citizens. The six Muslims were asked to leave their former country because they are considered a threat to national security.

People should not be citizens of the country they wage war against. Nor should those who preach or teach terror. After having served their sentence, they should not enjoy membership in the society they tried to destroy, but should be expelled without the possibility to return.

Depending on the definition of terrorism, such laws could be very relevant, should Muslim-dominated areas inside our countries create physical fronts and show violent and persistent hostility towards the state.

Whoever does not voluntarily leave such violent self-declared autonomous areas when asked to do so by the authorities could be considered a terrorist with the aim of using violence and threats in order to remove the rule of law in parts of the country, provoke a state of terror in the general public to obtain religious or political goals, or even achieve some degree of secession.

Considering the speed of how violent hostility towards non-Islamic authorities and non-Muslims in general grows in thousands of Europe's Islamic ghettos, we are witnessing what could be a prelude to the no-longer-so-unthinkable: the illegal borders, guerrilla warfare, terror and kidnappings that have always characterized the borders between the Houses of Submission and Jihad -- Sharia Land and the infidels.

Confronted with an organised attack -- whether staged by lone wolves, groups or whole city blocks -- with the aim of destabilizing or destroying our countries, citizenship should no longer be unconditional.

Endnote: related articles of mine "Integration, immigration and Islam-related problems: 23 suggestions for laws" and "What is Islamization? An incomplete list."
Posted by Diane Sori at 10:06 AM No comments: