Truth in a Cartoon... 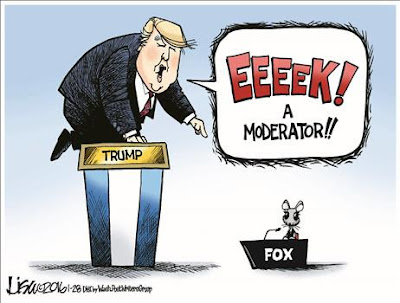 “Nader Modanlo was facing five more years in federal prison when he got an extraordinary offer: U.S. President Barack Obama was ready to commute his sentence as part of this month’s historic and then still-secret prisoner swap with Iran. He said no. To sweeten the deal, the U.S. administration then dropped a claim against the Iran-born aerospace engineer for $10 million that a Maryland jury found he had taken as an illegal payment from Iran, according to interviews with Modanlo, lawyers involved and U.S. officials with knowledge of the matter.”

Obama was ready to commute his sentence, and then sweetened the deal by dropping the monetary claim when he balked. It seems as if there is no concession Obama is not willing to...

RATINGS ARE IN: Fox News gets FOUR TIMES as many viewers as Trump…
By soopermexican / therightscoop.com


The ratings are in, and although Fox was definitely hurt by the absence of el Trumpo, they easily trounced the coverage of his anti-debate temper tantrum rally.
From CNN Money:


Donald Trump counter-programmed Thursday’s GOP primary debate with his own prime time event. So whose show scored a bigger audience?

Answer: Fox’s debate. But it was the second lowest rated debate of the season. So Trump is certain to take credit for hurting the channel’s total viewership.

The first hour of Fox’s Trump-less debate had an 8.4 household rating, according to early Nielsen data on so-called metered markets.

This means 8.4% of American homes with TV sets were watching the face-off.

The second hour had an 8.3 rating, which means the audience was loyal even though Trump was absent.

By comparison, two of the cable channels that showed parts of Trump’s event, CNN and MSNBC, had about a quarter of Fox’s audience combined.

By Craig Andresen – The National Patriot and Right Side Patriots on americanpbn.com

According to Donald Trump, “I could stand in the middle of 5th avenue and shoot people and I wouldn’t lose voters.”

Is he the only one who could do such a thing and not lose any of his support?

Any penny-ante, tin-pot dictator in any 3rd world, one horse rogue nation could do it. Lil Kim in North Korea could do it. There was a time when Saddam and Gaddafi could have done it. Lenin and Stalin and Hitler did do it.

Forget 3rd world, one horse rogue nations…hell, Obama could get away with it just to name another dictator and that is exactly what’s wrong in this country. Electing a president has become a side show rather than a concerted effort to choose who would actually be the best for the job.

After Trump made his latest, ‘out of touch with reality’ statement on Saturday afternoon…his Trump-drunk followers started making excuses…”it was taken out of context,” and “he didn’t mean anything by it.” “Lighten up, he’s joking.”