In the face of threats from China and Russia, and responding to President-elect Trump’s pledge to build a 350 ship fleet, the Navy is proposing the biggest shipbuilding increase since the Cold War.

Last month the Navy proposed 355 new ships, but that could come with a hefty price tag: an additional $5 billion to $5.5 billion in yearly spending in the Navy’s 30-year projection, according to an estimate by the Congressional Research Service.

In addition to being good for national security, a larger fleet would be better for both the sailors, who'd enjoy shorter deployments, and for the ships, which would have more down time for maintenance, said Matthew Paxton, president of the Shipbuilders Council of America, which represents most of the major Navy shipbuilders.

We have seen a spate of such attacks recently — and a billboard in Nazareth that actually called for them. “Moderate” Fatah called for such attacks. And the Islamic State issued this call in September 2014: So O muwahhid, do not let this battle pass you by wherever you may be. You must strike the soldiers, […]

Nice, Ohio State University, Berlin ….. now. Vehicular jihad has been exhorted by the Islamic State — cheap, easy and deadly. And devout Muslims around the world have responded and acted.

‘I heard my soldiers screaming and shouting.

‘I saw a truck that went on the side of the road. Soldiers starting shooting… There were orders and screaming everywhere. They told them to hide behind the wall because there was fear of another attack.

‘There was no sense in that reverse. He drove backward to crush more people. That was really clear.’

Emergency medical forces declared this a mass casualty incident with more over a dozen wounded, some seriously.

Savages slaughtering in the cause of Allah. Peace is not possible until the Muslim world expunges Islamic Jew-hatred from its texts and teachings.

Read entire article here: http://pamelageller.com/2017/01/netanyahu-isis-behind-israel-truck-attack-jerusalem-four-dead-14-injured-nice-berlin-osu.html/
Posted by Diane Sori at 10:55 AM No comments: 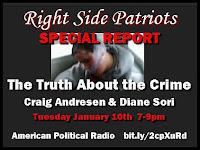 Hope you can tune in at: http://tunein.com/radio/American-Political-Radio-s273246/
Posted by Diane Sori at 10:16 AM No comments:

A Bit Too Close to Home
By: Diane Sori / The Patriot Factor / Right Side Patriots on American Political Radio http://tunein.com/radio/American-Political-Radio-s273246/

This past Friday, January 6, 2017, at about 1pm EST... terrorism...islamic terrorism of the domestic kind...hit a bit too close to home when South Florida’s Ft. Lauderdale-Hollywood International Airport came under siege.

Living in a Ft. Lauderdale suburb, I, like many of my fellow locals, sat glued to our televisions as the horrific events unfolded. Events that saw New Jersey-born, American citizen, and Iraq War combat veteran 26-year old Esteban Santiago-Ruiz (the full Spanish version of his name), mow down in a mere 70 to 80 seconds 13 people waiting for their suitcases at Terminal 2’s Delta Airlines baggage claim area, and doing so in a cold-blooded yet clearly calculated and methodical way. Aiming directly for the head, Santiago murdered five innocent bystanders* and seriously injured eight others...most being tourists heading to Ft. Lauderdale based Caribbean cruise vacations.

And as per the Broward County Sheriff’s Department, 37 other people also sustained non life-threatening injuries during both the evacuation process itself and the panic that ensued after the shooting and amid fear that there might be a second shooter...which thankfully there was not.

Captured without protest after he emptied the two cartridges he carried (roughly 15 rounds) into randomly chosen victims (the Walther 9mm semi-automatic handgun Santiago used was in his checked bag which as per federal rules can be declared and checked under the plane but not carried on)...Santiago when taken into custody told the F.B.I. that the“voices in his head” were telling him to fight for ISIS...“voices” that the liberal do-gooders are now using to help set the stage for either a PTSD or an insanity defense. And this stage-setting gives the media much needed fodder to help twist facts into lies... lies they hope the gullible amongst us will swallow as they once again help to cover for and deflect away from the truth about this young man and his ties to islamic terrorism of the domestic kind.

And remember that no matter what the media and the talking heads say, it must be understand that this attack was indeed a planned and carefully orchestrated deliberate act of terrorism perpetrated by an islamic follower. And little if any credence must be given to Santiago’s family and friends who, as expected, are claiming that Santiago’s now exposed ‘troubled behavior’ began almost immediately after he returned from a tour of duty in Iraq...a sure sign that a PTSD defense for his actions will be the one the defense uses.... the same defense used by the lawyers who defended the killer of American hero Kris Kyle.

But could this what most likely will be a PTSD blame game defense be an Obama and media fabricated construct designed to further take away our veteran's rights and credibility...I would NOT put it passed them as Obama would love nothing better than to leave office by further defaming our military, especially since Santiago was already known by the Army for his ’troubled behavior’ and whose family claims the army did not do enough to help their ‘supposedly’ mentally ill relative.

Also known to both the Anchorage F.B.I. and to the Anchorage police, what is amazing is why then if Santiago (who had a minor criminal record) exhibited ‘troubled behavior’ to both...including telling the Anchorage F.B.I. that he had “terrorist thoughts” and was “influenced by ISIS” but was given mere lip-service to and dismissed...was he not put on the ‘NO-Fly’ list, and why did the Anchorage police return a handgun to Santiago (some are now saying it’s the very gun he used in the airport massacre) that had been ‘temporarily’ taken away from him on November 7, 2016, when he underwent a police-ordered mental evaluation where he was deemed not mentally ill.

Deemed not mentally ill...an important fact to remember as this gives more credence to the truth that Estaban Santiago-Ruiz was indeed a domestic terrorist of the homegrown sort.

Now let’s delve into a few key truths about this homegrown terrorist...this islamist hiding in plain sight. And while the media and this still-sitting administration is trying to get us to believe that Estaban Santiago-Ruiz either has PTSD or is completely mad...the fact is that this very man has admitted that he did the shooting and that it was pre-planned to cause as much carnage as possible. And yet the media refuses to admit, were told to ignore, or were ‘ordered’ to dare not speak of Santiago’s strong and yet undeniable islamic ties.

And these ties include that:

So now that we know Santiago’s islamic ties we can see how this event will be manipulated in order to render those ties unimportant, and how this case will then be twisted into Chris Kyle revisited albeit with more victims. 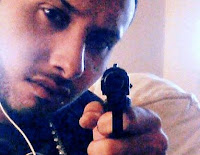 Want proof of that...let’s start with the fact that while the criminal complaint has already been filed by Miami U.S. Attorney Wifredo Ferrer, a complaint accusing Santiago of an act of violence at an international airport that resulted in death, in addition to it containing two firearms offenses, with the main offense carrying with it a maximum punishment of death or life in prison...I find it very interesting that certain officials in both Florida and Alaska are ruling out terrorism as a motive. And this includes Alaska U.S. Attorney Karen Loeffler, who is making excuses for giving Santiago his November taken away gun back by claiming that with no formal adjudication of mental illness being issued that the police’s hands were tied.

Now add in that Marlin Ritzman, the F.B.I.’s special agent in charge, told reporters in Anchorage that there was no indication that Santiago worked with any other individuals when he planned and carried out the airport attack, thus being completely clueless to the fact that Santiago’s islamic ties were as clear as the nose on his face. In fact, any ties no matter how small should have been an immediate ‘red flag.’

And cluelessness also extends to Ritzman's Florida counterpart George Piro, who said that the "indications are that he came here to carry out this horrific attack” but that "We have not identified any triggers” and that "It appears the shooter was acting alone, but, again, it’s early in the investigation."

Yes, it is early in the investigation but not too early to see that the islamic-condoning Obama administration...and haven’t they been a wee bit too silent concerning this incident...coupled with media manipulation seems to be the order of the day as they attempt to twist an obvious act of islamic terrorism into one of PTSD (remember Santiago was not deemed mentally ill, therefore, an insanity defense would be much harder to prove than one of PTSD)...and that not only is a slap in the face to those returning troops and vets who truly suffer its ravages but to our military as a whole as well.

So as we now await what the administration and the media wants us to believe is the motive behind the Ft. Lauderdale-Hollywood International Airport shooting... and as we locals come to grips with the fact that islamic terrorism has come to our South Florida paradise...just know that the gun-control loons will be out in full force as they willingly ignore the fact that just one person with a gun at the baggage claim area could have prevented the extent of the carnage, and maybe even save we taxpayers the expense of a trial for an islamist who oh so proudly has already admitted his guilt.

* To date as I write this article, three of the five victims have been identified as Terry Andres, 62, a Norfolk Naval Shipyard employee from Virginia Beach; Olga Woltering, a great-grandmother from Georgia; and Michael Oehme, of Council Bluffs, Iowa...all murdered right before their spouses eyes. May they Rest in Peace...and may islamic bastard Estaban Santiago-Ruiz rot in hell forever.
Posted by Diane Sori at 12:00 AM No comments: