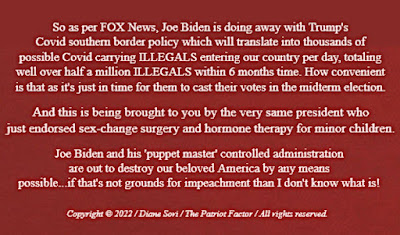 Posted by Diane Sori at 1:50 PM No comments:

A threat to our national security while also keeping us dependent on foreign oil. 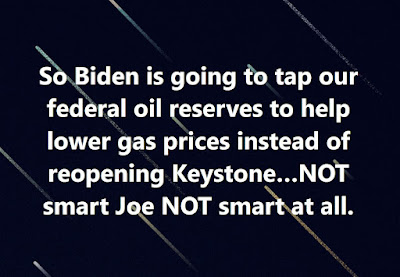 Question: What’s one thing that former Presidents Donald Trump and Barack Obama have in common?

Answer: Both of President Biden’s two most immediate predecessors in the White House suffered from negative poll numbers on the eve of their first midterm elections in office and both saw their party lose control of the House of Representatives.

In November 2010, Obama’s approval rating was underwater by 4 points as the Republicans rode a powerful Tea Party fueled red wave to flip the House with a massive 63-seat net gain, the largest shift of seats in more than 60 years.

Rep. Alexandria Ocasio-Cortez (D-NY) has a message for Democrats. They’re in trouble. Thank you, Ms. Obvious. This has been a storm brewing for months. Where have you been, lady? The gas price fiasco started as soon as Joe Dementia killed the Keystone Pipeline. There’s a border crisis. More people have died of COVID under Biden than Trump. We have an inflation crisis. We left Afghanistan in shambles that shredded the credibility of the US abroad. It’s showing with the recent Ukraine war. Everyone is planning on America being unreliable under the administration of someone who is a drooling vegetable. We have the JV squad running the country—and they’re mentally challenged. It’s clown town. Moreover, we’re heading into a recession, and it’s an election year.
Read more »
Posted by Diane Sori at 6:46 AM No comments: