Tax season is stressful enough. But if you are like countless miserable Americans trapped in the Obamacare 1095-A abyss, it's hell on stilts on a Segway teetering over the South Rim of the Grand Canyon.

The screw-ups, incompetence and bureaucratic blame avoidance over the health insurance exchange tax forms make the healthcare.gov website fiasco look like a flawless product launch. How do I know? My family inexplicably got ensnared in the 1095-A paperwork pit. It's a government roach motel: Taxpayers check in, but they can never check out.

In 2013, our private high-deductible PPO from Anthem Blue Cross got canceled because of "changes from health care reform (also called the Affordable Care Act or ACA)." Millions of others like us in the individual market for health insurance -- including self-employed people, small-business owners, writers, artists and home-based entrepreneurs -- suffered the same fate.

My husband reluctantly contacted Colorado's state health insurance exchange, "Connect for Health Colorado," just to see what our options were. Months later, we settled on purchasing a new non-Obamacare plan directly from a different private insurer, Rocky Mountain Health. The provider network is much narrower than the Anthem plan we had before the feds intervened. Our two kids' dental care is no longer covered, and we've had our insurance turned down at an urgent care clinic -- something that had never happened before.

Better off? Bullcrap. But wait, it gets worse.

Somewhere along the way, the worker bees at Connect for Health Colorado dragooned us into an Obamacare exchange plan offered by Rocky Mountain Health without our knowledge or consent. (How else has the White House inflated Obamacare enrollment figures? Things that make you go "hmm.")

Last month, we received an IRS 1095-A form, which, much to our shock and chagrin, indicated that we had paid Obamacare premiums every month during 2014.

It took hours of time on the phone and Internet to receive an explanation from Connect for Health Colorado on how exactly this happened. Here was the government's response, word for incomprehensible word:

"We apologize for the delay in responding to your email. After checking your account we are showing you might have had coverage from October 2014 to June 2014. Please call the number below to speak with a Customer Service Representative if this information is incorrect."

The saga continues. We were finally able to un-enroll after being auto-enrolled in the Obamacare plan. Then, after being bounced around by the state government health exchange to various voicemail dead ends and back, with hours of migraine-inducing, on-hold music in between, we were told there's absolutely nothing wrong with the 1095-A form -- which shows payment of premiums we didn't pay to an Obamacare plan we never enrolled in and didn't want in the first place!

New Poll Shows Why Rubio Could Possibly Win the Nomination

Scrolling through the latest NBC News/Wall Street Journal poll, which is making headlines for this reason, I found something rather interesting: GOP primary voters seem very open to the idea of supporting Sen. Marco Rubio (R-FL) in 2016: The junior Senator from Florida is a force to be reckoned with: Fully 56 percent of respondents could see themselves pulling the lever for him in 2016 while only 26 percent could not. And while Gov. Scott Walker’s (R-WI) numbers are a little better (after all, only 17 percent of respondents would completely rule him out in 2016), the survey suggests Rubio is an early favorite. It appears his gamble, therefore, is exceedingly well calculated.

Two other noteworthy tidbits: Opposition to Ben Carson running for president is remarkably and surprisingly low. Only 18 percent of respondents would definitively not vote for him, whereas a whopping 57 percent would not vote for Gov. Chris Christie (R-NJ). In fact, Christie seems to be a persona non grata among Republican primary voters. Only 32 percent of respondents say they’d be open to voting for him in 2016. What a difference an election cycle makes.

I’ll leave you with this. While the Republicans have a crowded and impressive field of candidates, the Democrats most assuredly do not. Sadly, however, most Democrats don’t seem to care all that much:

How dare they try to get in the way of a perfectly good appeasement agreement? The audacity! “Iranian FM Zarif to U.S. Senators: You Are Ignorant Of International Law,” Tehran Times, March 10, 2015: TEHRAN – The Iranian foreign minister on Monday reacted to an open letter to Iran’s leaders by 47 U.S. Republican senators […]

Al-Aqsa Mosque Address: May the Muslims Wage War on America

These are the people Obama is pressing the Israelis to make concessions with in order to establish “peace.” Obama knows what he is about. Six years into his presidency, there is no doubt about that.

Speaking at the Al-Aqsa Mosque, Palestinian Arab researcher calls on Muslims to pray that Allah will enable them to wage war on America.

In a recent address at the Al-Aqsa Mosque, a Palestinian Arab political researcher launched a verbal tirade against the United States.

The researcher, Ahmad Al-Khatwani, also known as “Abu Hamza”, declared that Muslims should pray that Allah will enable them to wage war on...

Email ThisBlogThis!Share to TwitterShare to FacebookShare to Pinterest
By Craig Andresen – The National Patriot and Right Side Patriots oncprworldwidemedia.net 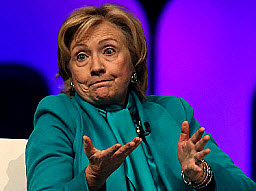 Yesterday, in Lies, Injustice and the Clintonian Way (part 1 of 2) I outlined Hillary’s email scandal and ended that article with, “From Watergate, where Hillary was fired from the investigation for unethical behavior to Servergate where she tried to slip all of her emails past official detection…with Whitewater…Vince Foster and Benghazi and many other scandals all sandwiched in between…Hillary Clinton has started to become a pariah to even some in the mainstream liberal media. So much so that she will NOT be running in 2016 or ever for that matter.”

“It’s not just this email scandal that is behind it either but…I’ll have more on that tomorrow.”

Well, the time has come to expose what I believe to be the true roots of an upcoming decision by Hillary Clinton NOT to make another run at the presidency in 2016.

To connect the dots, we must first return to 2008 when, in the couple of years leading up to the democrat national convention…all eyes were on Hillary. She was seemingly the heir apparent. The nomination was hers and republicans had geared up for THAT specific fight.

Then…along came Barack Hussein Obama and everything changed. Hillary was NOT nominated and the rest, as they say, has been history.

I contend that it’s just the latest straw.

Read full article here:
http://www.thenationalpatriot.com/2015/03/11/lies-injustice-and-the-clintonian-way-part-2-of-2/
Posted by Diane Sori at 11:07 AM No comments: