The Afghan fool’s errand continues with no end in sight. Crippled by Obama’s impossible Rules of Engagement, our troops are there with no goal, no purpose, and no outcome other than to serve as targets for the Taliban.


US troops in Afghanistan will be allowed to target Taliban fighters in Afghanistan from 2015, US officials say, expanding their role after the end of major combat operations.

Previous plans had limited their role to training Afghan troops and tackling the remnants of al-Qaeda.

The military will now be allowed to fight the Taliban if the militants “directly threaten the United States and coalition forces” or provide “direct support to al-Qaeda”, an unnamed official told US media.

The Associated Press and the New York Times say the change has been quietly decided by President Obama in recent weeks….

A longtime Clinton ally, assistant secretary of state for South Asian affairs in the Clinton administration, former Ambassador to Tunisia and donor, Robin Raphel, is at the center of an FBI counterintelligence  (spy) probe. She was a registered foreign agent for the Pakistani government up until just days before she was appointed to run the U.S. State Department’s Pakistan aid team ….. (read more)

American investigators intercepted a conversation this year in which a Pakistani official said that his government was receiving American secrets from a prominent former State Department diplomat, officials said, setting off an espionage investigation.

If this were a Republican (think Scooter Libby, who was falsely...

That lying Indonesian (or Kenyan or whatever he is, but one thing’s for sure, he isn’t American) should never have been re-elected. His entire presidency is a fraud. One long unending fraud.

The only way to stop this putsch is to make sure Hillary Clinton never makes it to the White House. Many of the liars in the Benghazi terror cover-up were as close to her as to Obama, like then-acting director of the CIA Mike Morell. She owes them bigtime, and these traitors will be rewarded in the Clinton administration. I wouldn’t be surprised if Robin Raphel wasn’t on the short list for her Secretary of State.

Republicans Could Be Overstating Importance Of Winning More Hispanic Voters

We know voter ID laws really don’t swing elections, but what about the other liberal talking point that demographics were to blame?
“Revenge of the white guys,” wrote liberal Amanda Marcotte that day after Democrats got decimated across the country.

So, is it true that a 2012 electorate would have brought better fortune to Democrats in 2014? Not really says Real Clear Politics’ Sean Trende.

For starters, President Obama was somewhat popular in 2012; he’s toxic right now. But let’s go through the numbers. Trende wrote [emphasis mine]:


If the 2014 electorate had resembled the 2012 electorate in terms of race, the Republican vote share would shrink by just 1.97 percentage points. In other words, in a 2012 electorate, Republicans would have won the popular vote for the House by 4.5 points, rather than 6.5 points. That’s not nothing, as they say, but it still only explains a relatively small share of the difference between the 2012 and 2014 results. Put differently, if Obama had put up the same vote shares among racial groups in 2012 as Democrats ultimately did in 2014, he’d have lost. …

The 2014 electorate was, in fact, quite a bit older than the 2012 electorate. This isn’t necessarily surprising, given that the elderly population is actually set to grow substantially in the next decade. Regardless, if we reduce the 65+ share of the electorate from 2014’s 22 percent to 2012’s 16 percent, increase the 18-24 year old share from 7 percent (2014) to 11 percent (2012), and adjust everything in between accordingly, the Republican advantage contracts by ... 1.94 points.

Now you might look at this and say, “Well, that’s a total of four points!” The problem with this approach is that there is a substantial double count going on. Democrats do better among young voters in large part because that demographic is less white; younger whites don’t vote that differently from older whites. So this isn’t a cumulative exercise.

To get around this, we can look at the age-race crosstabs. That is, the exit polls tell us how not just 18-29-year-olds voted and African-Americans voted, but also how 18-29-year-old African-Americans voted (and so forth). If those groups had turned out in a way as to re-create the 2012 electorate, the Republican margin constricts by a bit more than if we looked at race alone or age alone, but the change still only amounts to about two points.

In other words, even if Democrats had managed to re-create 2012-style age or racial demographics in 2014, they still would have had a rough year.

"Smoke and Mirrors": How Jon Gruber Proved Republicans Right About the CBO

Once upon a time, it was gauche to accuse one's ideological opposition of exploiting the rules by which the Congressional Budget Office plays the scoring game. It's worth revisiting this idea in the wake of MIT academic Jonathan Gruber's admission of guilt to this charge.

Way back in 2011, there were conservatives writing about how the CBO's score of the Affordable Care Act rested on "budget gimmicks," "smoke and mirrors," and "a dismal track record."

Vox's Ezra Klein, then at the Washington Post, declared that there was a "Republican war on the CBO," and said that it was "an effort to discredit the last truly neutral, truly respected scorekeeper in Washington." It's true that the CBO is immensely respected: a bad CBO score can kill a major piece of legislation, and a good CBO score will help convince fence-sitters that legislation has limited downside. And it's not that the CBO isn't valuable. Republicans never hated the player; they just hated the game.

The CBO has rules that they have to abide by and judgment calls they have to make. It's not math that Republicans took issue with. It's the subjectivity that definitionally has to be involved. The CBO, for example, scores all legislation in a ten-year budget window from date of enactment. Not the date that a policy comes into effect, mind you; the date that it's passed. This is a useful rule, because it's often nearly useless to extrapolate government policy out past ten years. But what it means is that if a governing party wants to frontload budget savings and backload the costs, it'll get a much more favorable score than if the costs and savings were scored over ten years of enactment. It's undeniable that this happened with ACA, as the costs of full implementation have only just come into effect (and they're still not 100% in effect; the Cadillac tax won't take hold for another few years) even though the legislation was signed in 2010.

Obamacare Architect/Non-Architect/Friend/Adjacent Policy Guy Jonathan Gruber admitted as much. President Obama needed to include an individual mandate in his health law or the whole thing would fall apart. The problem was that the CBO had, in the past, scored private sector mandates as on-budget. These were thought to have killed the Clinton health reform plan in 1994. Obama-era Democrats - most likely with Gruber's help - massaged their plan in order to fit CBO's judgment of what kind of a private sector mandate wouldn't count as a tax. And this is indeed a judgment call. The Supreme Court ruled that the individual mandate's constitutionality rests on the government's taxing power after the CBo ruled that the mandate didn't count as a tax. That's a difficult needle to thread, but the Democrats, with Jonathan Gruber's assistance, managed to make it happen.

Email ThisBlogThis!Share to TwitterShare to FacebookShare to Pinterest
States Have Unfunded Liabilities of $4.7 Trillion
NEWSMAX

State-level public pension plans are underfunded by a massive $4.73 trillion this year, according to a new report from State Budget Solutions — an amount equal to more than $15,000 for each American.

"This spells trouble for the millions of baby boomers who are quickly approaching retirement age and expect to collect the pensions promised to them by government officials," writes Joe Luppino-Esposito, author of the "Promises Made, Promises Broken 2014" report.

"State taxpayers who are not government employees will also feel the pinch, which could result in reduced government services as larger and larger portions of the states' budgets must be allocated to cover the public pension shortfall."

But these large states have larger numbers of public sector employees, so simply looking at the total figures can be misleading. A better indicator of pension plan health is the funding ratio, which compares assets to liabilities.

By this yardstick, the Illinois pension plan is in worst shape, with a funding ratio of just 22 percent — it has assets of $95 billion, about 22 percent of its liabilities of $426.6 billion. Other states with low ratios are Connecticut (23 percent), Kentucky (24 percent), Alaska (25 percent), and Mississippi (27 percent).

The most well-funded state is Wisconsin, with a funding ratio of 67 percent.

One reason for the huge unfunded liability numbers is that officials rely on overly optimistic returns on the investment of assets, Luppino-Esposito asserts.

Also, states are often guilty of not making the necessary annual contributions to the pension funds.

"State Budget Solutions found that in recent years several states have reduced the annual required contribution to the pension funds, or just skipped the payments altogether," the report notes. "New Jersey is the latest state to pull off this budget gimmick, reducing this year's payment by a whopping $4.2 billion as a way of 'balancing' the state's budget."

Daily Caller  This is more than 18 times the national representation of Muslims in America, reported to be 0.8 percent. Prisons are churning out converts to Islam who are taught they are righteously entitled to control the religion, speech, and dress of family, co-workers and strangers.

Back in 2006, then FBI director Robert Mueller prophetically described the radical Islamist conversion machine operating throughout U.S. prisons, to a Senate committee. He said that prisons were a “fertile ground” for Islamic extremists, and that they targeted inmates for introduction to the militant Wahhabi and Salafist strains of Islam.

The recent so-called “lone wolf” terrorist attacks in Oklahoma City, New York, and just over our northern border in the Canadian capital of Ottawa, may be the product of such radicalization. Beheaded by a convict who converted to Islam in prison

In April 2010, Larry James murdered his mother, pregnant wife, 7-month-old son, 3-year-old niece and 16-year-old niece for refusing to convert to Islam. James converted in 2007, while in a U.S. prison. 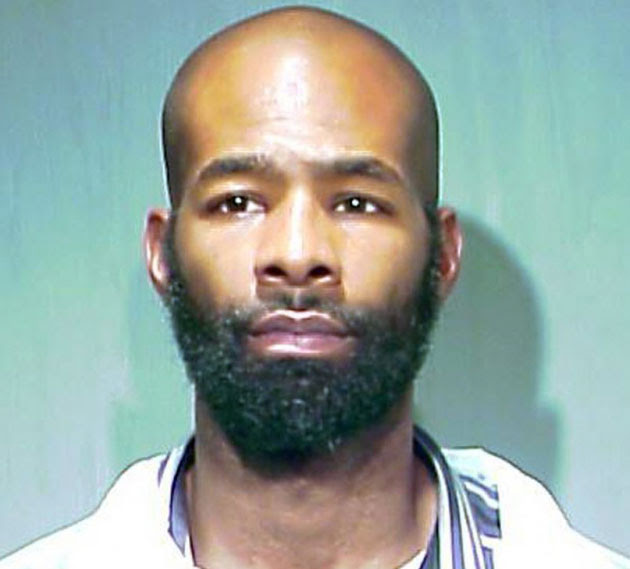 Then two months ago Colleen Hufford, a 54-year-old grandmother and factory worker in Oklahoma, was beheaded with a produce knife by Alton Nolen who likely converted to Islam in a U.S. prison. Nolen is being charged with workplace violence.

Last month NYPD officer Kenneth Healey, 25, was axed to death with a hatchet to the side of the head. He was not attacked by a “lone wolf,” but by ex-con Zale Thompson. New York City Police Commissioner William Bratton has called it a terrorist attack, and the NYPD might want to look at Thompson’s record in California where he did two brief terms in California prisons.