The Real Reason Hillary Asked for a Recount

Why did Hillary Clinton join Jill Stein, the Green Party’s oddball presidential nominee, in asking for a recount of the votes in Wisconsin, Michigan and Pennsylvania when everyone knows that such a recount won’t change the outcome of the 2016 election?

Part of the answer is that people close to Hillary—Huma Abedin, Chelsea Clinton, and Sidney Blumenthal—encouraged her to ask for a recount as a way of lifting her spirits.

“She is weepy, looks ten years older and is very whiny,” said one of Hillary’s closest friends. “She has been drinking wine pretty heavily, much more than usual. She mopes around all day, swimming in a sea of recriminations and complaining that her campaign managers were ‘incompetent,’ Bill and Chelsea ‘didn’t work hard enough,’ FBI Director Comey was ‘in league with Trump.’”

In addition, President Obama convinced Hillary that it was in the best interest of the Democratic Party if the Clinton legal team got involved with the recount and didn’t leave it to Jill Stein.

“The president felt that the progressives were acting stunned and helpless and had to rise out of their stupor and show that they weren’t going to take their defeat lying down,” said the source. “Contesting the results of the election was the best and fastest way to stir the morale and fighting spirit of the demoralized party.

“Obama felt that a recount would plant a seed with the base that the election was somehow dishonest,” the source continued. “He wanted to raise serious questions about the legitimacy of the Trump presidency.”

And what did Bill Clinton—the man Charlie Rose called “the best political animal that’s ever been in American politics”—think of all this?

Said a close Clinton adviser: “Bill thinks the recount is going to backfire as a strategy because there are probably no more than a handful of questionable ballots and they could actually wind up adding to Trump’s numbers and validate rather than invalidate his election.”

Email ThisBlogThis!Share to TwitterShare to FacebookShare to Pinterest
Keith Ellison met in Saudi Arabia with jihadi cleric and bank that funds jihad bombings

Ellison has spoken at a convention of the Islamic Society of North America (ISNA). Yet ISNA has actually admitted its ties to Hamas, which styles itself the Palestinian arm of the Muslim Brotherhood. The Justice Department actually classified ISNA among entities “who are and/or were members of the US Muslim Brotherhood.” It gets worse. In […] 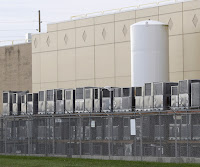 Carrier, the heating and air-conditioner company that announced Tuesday it had agreed to keep 1,000 jobs in the United States after talks with President-elect Donald Trump, elaborated Wednesday, saying it had been offered state "incentives" to stay.

The company did not specify on what the incentives were, but such deals with state and local governments typically include tax breaks the governments believe will be offset by the additions to the workforce brought by the company.

Late Wednesday, a former Indiana official told Politico that the deal was about lucrative federal contracts. 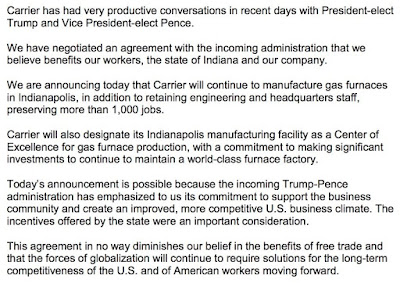 The agreement includes $700,000 in state tax breaks offered by the Indiana Economic Development Corporation, a quasi-public entity that doesn't require legislative approval for its deals.

Email ThisBlogThis!Share to TwitterShare to FacebookShare to Pinterest
Thousands of Muslim Migrants entering US through Mexican border
By Larry Estavan / THE GELLER REPORT

It is going to take more than a wall to stop the international petrodollar-financed pressure to make Western countries Islamic.


“While the exact draw of the round-the-world route isn’t entirely clear, Meyer said an expanding network of human smugglers appear to be taking advantage of the increasingly popular smuggling routes that use Mexico as a transit country.

“There’s a lot of smuggling that goes through Mexico that you don’t see,” Meyer said.

She added that rumors of lenient treatment of some immigrants in the United States may also be a factor.

The recent influx of overseas migrants may be a harbinger of things to come.

More than 7,000 people who claimed to be from Africa have been arrested in Mexico between January and August, according to statistics maintained by Mexican federal immigration authorities. The number of such immigrants has been on the rise in recent years.

In 2013 Mexican immigration authorities arrested fewer than 1,000 migrants from Asia and Africa, while the number rose to nearly 11,000 from January through August.”